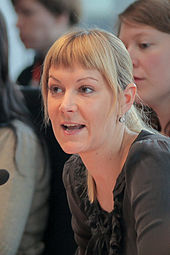 She has been a member of the German Bundestag since autumn 2009 . In the 2013 federal election , she was one of the party's eight top candidates.

Gohlke graduated from high school in 1995 and then studied communication science . She completed her studies with a Magister Artium . From 2004 to 2008 she worked as a project manager in event management as well as in market and opinion research. From June 2008 until she moved into the Bundestag she was employed in the regional office south of the Left Party in the German Bundestag.

Gohlke was politicized in 1991 in the movement against the Second Gulf War and the racist pogroms in the 1990s . In 1997, while studying, she joined the student protests against austerity plans at universities. In 2001 she joined the Attac movement, which is critical of globalization . She became a member of the Attac Munich coordination group, to which she was a member until 2003, and in the summer of 2001 she took part in the protests against the world economic summit in Genoa .

In autumn 2008 she ran for the state election in Bavaria as a direct candidate in the district of Munich-Bogenhausen and was able to unite 5.2% of the first votes. In the 2009 Bundestag election , she received 5.9% of the votes as a direct candidate in the Munich-East constituency and was a member of the German Bundestag for the first time via the state list of the Left. The party placed her in January 2013 as one of the eight top candidates. She was re-elected, is a member of the Committee on Education, Research and Technology Assessment and is university and science policy spokeswoman for the Left Party in the Bundestag. She is also a deputy member of the Committee for Construction, Housing, Urban Development and Municipalities . In 2017 she was re-elected via the state list.

Within her party she is part of the Socialist Left .

Gohlke is a member of the GEW , ver.di and the Association of Democratic Scientists ( BdWi ). She is also a member of the advisory board of the German Student Union and the parliamentary advisory board of the distance university in Hagen , in the support group for democratic elementary and university education, and of the Kurt Eisner Association in Bavaria.

Gohlke criticizes tuition fees , the Bologna Process and expensive housing for students. As the spokesperson for university policy in her parliamentary group and a member of the Education Committee of the German Bundestag, she advocates improvements in study conditions. The increased burdens in the Bachelor's degree limited the ability of students to finance their studies through work, which is exacerbated by tuition fees. In addition, it calls for the restriction of fixed-term employment relationships in the higher education sector: Only “formal and certifiable qualification goals” ( master's thesis , doctorate , habilitation ) should justify a time limit. For “permanent tasks” there should be “permanent positions”.

In 2016 she rejected the cooperation between the University of Bremen and the Bundeswehr and praised the legal opinion of the association “Natural Scientists Initiative Responsibility for Peace and Sustainability”, which had shown that the cooperation was incompatible with the civil clause of the university constitution. Justice Senator Martin Günthner had considered the cooperation to be permissible because the Bundeswehr was a "peace army". The Bremen Senate decided in February 2017 in favor of Günthner for further cooperation.

In the debate about the refugee policy positions of the left, she repeatedly took a public position against the parliamentary group leader Sahra Wagenknecht . In January 2018, together with Niema Movassat , Tobias Pflüger , Norbert Müller and other members of parliament, they published the appeal “Solidarity is indivisible” on the motionlinke.org platform, which advocates “full freedom of movement and equal social and political participation for all people living in Germany " pronounced. Further activities were announced at the group’s first advice in April 2018. When Wagenknecht's collection movement “ Stand Up ” did not take part in the Indivisible demonstration in October 2018 , Gohlke called it “incomprehensible to distance oneself from thousands of people who advocate left-wing, humane politics”.

At a public event on the Battle of Kobanê on October 18, 2014, Gohlke waved a PKK flag and called on the German government to stop criminalizing this symbol, as "a fight for freedom, human rights and democracy is currently being waged" under this flag. She also called for the PKK ban to be lifted. At that time, PKK troops were fighting the Islamic State jihadist militia near Kobanê . Due to the flag being displayed, Gohlke's parliamentary immunity was lifted after a heated debate by the Bundestag, with Gohlke's parliamentary group colleague Jan van Aken describing the lifting as absurd and showing a picture of the PKK flag, for which he received a call to order . The charge was heard before the Munich District Court , but Gohlke only warned it and stipulated a donation of 1000 euros.

As the last member of the Bundestag, she was observed by the Bavarian Office for the Protection of the Constitution until 2015 . According to the taz , she was suspicious of this, among other things because of her membership in the post-Trotskyist network Marx21 , an anti- fascist emblem and her involvement in extra-parliamentary groups.

Nicole Gohlke is married and non-denominational .