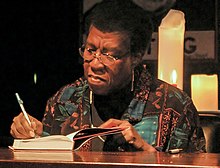 Octavia Estelle Butler (* 22. June 1947 in Pasadena , California ; † 24. February 2006 in Lake Forest Park , Seattle ) was an American science fiction - writer . She was one of the few black writers in the science fiction genre, and the first to achieve greater notoriety. Her work often deals with feminist and racial issues, so her protagonists are often part of a minority.

Octavia E. Butler was the daughter of Laurice and Octavia M. (Guy) Butler and grew up in poor conditions. Her father was a shoeshine boy and died when she was very young; her mother was a poorly paid maid. Sometimes she grew up with her grandparents, who were staunch Baptists . During her school days she was diagnosed with a reading disorder, and in retrospect she described herself as an extremely shy child who spent a lot of time alone in the library. Nevertheless, she attended Pasadena City College from 1965 to 1968 and from 1969 the California State University in Los Angeles and the University of California in Los Angeles . There she attended advanced courses, one of which was led by Theodore Sturgeon . When she submitted some sitcom manuscripts to the Writers Guild of America Open Door program , seminar leader Harlan Ellison advised her to try serious short stories and novels instead. She did. Ellison also persuaded her to attend the Clarion Science Fiction Writers' Workshop , where she met Samuel R. Delany and wrote her first stories, which were sold and published. After that, Octavia Butler got by with odd jobs, continued writing, and eventually, with Ellison's help, managed to get her first novel into Doubleday .

In 1976 she became known to the general public when she published the novel Patternmaster , the start of the Patternmaster cycle. He describes the emergence of telepathically gifted people and also deals with race and gender issues. Four more novels from this cycle followed before Octavia E. Butler published a book with Kindred in 1979 that had little to do with SF and was very successful. Without explaining time travel in any technical or scientific way, it describes how a young black woman is repeatedly drawn into the past of her ancestors, including a white slave trader. This trick of concentrating the present and history in one person brought the book a large audience and Octavia E. Butler the economic success to be able to make a living from writing from now on.

In the 1980s she won the four most important SF awards with the story Bloodchild 1985, after she had received the Hugo Award a year earlier . Then she published her Xenogenesis trilogy (later summarized under the title Lilith's Brood ). It is about saving humanity after a devastating war; the survivors meet an alien race that has a third gender, which not only mentally link the other two sexes, but can also change them genetically.

Over the 1990s, Octavia E. Butler worked on her Parable trilogy, of which she was only able to complete and publish the first two volumes. In it she describes a dystopia in which a new religion called "Earthseed" preaches the constant change of all things. Health problems and writer's block prevented her from completing the third volume. The second volume, Parable of the Talents , won the 1999 Nebula Award .

It was included in the anthology Daughters of Africa , edited in 1992 by Margaret Busby in London and New York.

In 1995 she was awarded the Genius Award of the MacArthur Fellows Program award, which was endowed with 295,000 US dollars. It wasn't until 2005 that she published her next and last novel, Fledgling , a vampire novel with some SF elements.

She lived in southern California until 1999 and moved to Seattle after her mother's death . In 2003 Butler published the short stories Amnesty and The Book of Martha, and in 2005 her second independent novel Fledgling .

On February 24, 2006, she fell on the cobblestones outside her home in Lake Forst Park, Washington, and sustained a head injury. She died that same day at the age of 58.

Butler had a longstanding relationship with the Huntington Library and left the library with her writings, including manuscripts, correspondence, schoolwork, notebooks, and photographs, on will. The collection, consisting of 9,062 pieces in 386 boxes, was made accessible for scientific research in 2010.