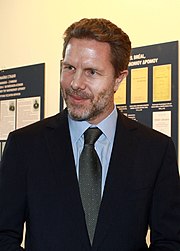 Pavlos Geroulanos (also Yeroulanos in Greek Παύλος Γερουλάνος , * 1966 in Athens ) is a Greek economist and politician. Between 2010 and 2012 he was Minister for Culture and Tourism. 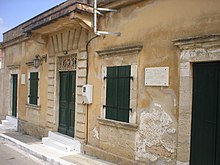 The family's ancestral home in Lixouri. The first floor was destroyed in the 1953 earthquake

Pavlos Geroulanos comes from the old academic family Geroulanos from Lixouri and is a further relative of the former Foreign Minister Georgios Streit (1868–1948) on the grandmother's side . He studied at Williams College , London, economics at Harvard, and business administration at MIT . At times he was an employee of the politician Greville Janner . He then worked for Barclays and Alpha Bank .

Back in Greece he took over the management of the fish farm Kefalonia Fisheries Ichthyotrofia Kefalonias ( Greek Ιχθυοτροφεία Κεφαλλονιάς ) founded by his father in the Bay of Lixouri . He specialized the company in ecological breeding of high quality fish for export. In 1999 he surprisingly became an employee of Giorgos Papandreou . From 2006 he held various offices and successfully ran as a member of parliament in 2009. In 2010 he was appointed Minister of Culture and Tourism.