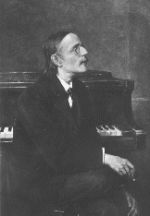 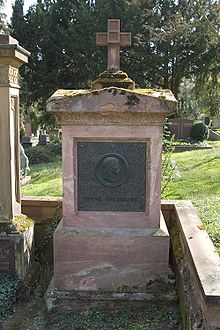 The composer's grave in Mainz, April 2007

After finishing secondary school, Cornelius worked as a violinist and actor at the Mainz theater and at the age of 19 became a court actor in Wiesbaden in 1843. In 1844 he came to Berlin to see his uncle, the painter Peter von Cornelius . After a few failures, Cornelius gave up the acting profession and studied composition with Siegfried Dehn from 1845 to 1849 . During this time, some of his chamber and church music works, but also secular songs, were composed. His most important work from this period is the Stabat Mater for solos, choir and orchestra from 1849, which was written as the final work of his apprenticeship with Dehn.

In 1851 Cornelius worked in Berlin as a music critic for the magazines Echo and Modespiegel . Through his uncle's mediation, he met Franz Liszt in 1853 , in whose Weimar area he lived with interruptions until 1858. Influenced by Liszt, Cornelius vehemently advocated the New German School in the Neue Zeitschrift für Musik . Much of his Catholic church music was written during these years.

Cornelius' opera The Barber of Baghdad premiered on December 15, 1858 . The performance, directed by Franz Liszt, turned into a scandal because it was disturbed by opponents of Liszt. Cornelius took this failure as an opportunity to go to Vienna in 1859 , where he met Friedrich Hebbel and Richard Wagner . “Sensible and mild delimitation and consolidation of what Wagner achieved in his prime” was his goal, according to his own admission. Cornelius stayed in Vienna until 1864 and accompanied Wagner to Munich in 1865 . There he received an honorary salary from King Ludwig II. On May 21, 1865, Cornelius' second opera The Cid was successfully premiered. In 1867, Cornelius was appointed to the newly established music academy in Munich as a lecturer in rhetoric and harmony.

Cornelius was an extremely prolific song composer . Almost half of his songs were based on his own poems, which were also set to music by other composers. Cornelius referred to himself as a "poet composer". The question of whether he should be a poet or a musician or a music journalist has been with him for most of his life. It was precisely this indecision and his modest and rather reserved nature that contributed to the fact that he was always in the shadow of his contemporaries Richard Wagner and Franz Liszt, both of whom he admired. Nevertheless, today he is particularly valued as a song composer.

"The Kings", from: Christmas Carols Opus 8,3. The piano accompaniment represents the chorale How beautifully does the morning star shine .

His estate was systematically evaluated and expanded by his son and biographer Carl Maria Cornelius. Since the city of Mainz acquired it from his widow in 1950, it has formed the core of the Peter Cornelius Archive in the Mainz City Library , which thus has the most important international collection of the artist's works. The archive was further expanded through decades of antiquarian purchases by the city library.

One of the most spectacular additions to the archive was made in 1999 when the composer's last large collection of music manuscripts was made available from the Joseph Standthartner (1818–1892) collection, which Sparkasse Mainz acquired in 1987.

The estate includes various materials from the musical and literary work of Peter Cornelius. It contains music manuscripts as autographs and copies, printed music (often in first editions), poems by Peter Cornelius, letters from and to Peter Cornelius, notebooks and diaries, family correspondence and a collection of pictures.

Monument to Peter Cornelius in the Green Belt Promenade (Drususwall) in Mainz, October 2013

In the rest of Germany