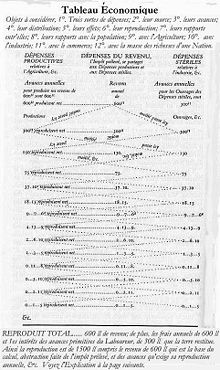 Physiocracy or Physiocratism ( ancient Greek 'rule of nature', compound of φύσις phýsis , German 'nature' and κρατία kratía , German 'rule' ) is an economic school founded by François Quesnay in the Age of Enlightenment with the assumption that nature alone Bringing out values and thus the land is the only source of a country's wealth. Thus, only agriculture , forestry , mining and fishing could achieve a surplus of production over intermediate consumption ( primary production ), while industry only transforms intermediate products .

This theory developed the first systematic approaches to explain economic structures and processes; Quesnay's Tableau économique is the first representation of the economic cycle .

The starting point of the Physiocrats was the decline of agriculture as a result of Jean-Baptiste Colbert's mercantilist economic policy in the late reign of Louis XIV, as well as the economic turmoil in the time of Philip of Orléans under the “ Law system ”.

The central thesis of the physiocrats is that land is the only source of wealth, and that value is only created from it. This shifts the creation of surplus value into the sphere of production, i.e. H. in the relationship between labor and capital. The surplus containing added value that the productive work within the above Achieved areas is referred to as a "gift of nature". If one looks for the emergence of values ​​in the sphere of production, it is certainly obvious that one sees it first in the human-nature exchange. The physiocracy stood in opposition to the concept of profit upon expropriation in English economists, who transferred the source of wealth to the sphere of circulation.

According to the views of the physiocrats, the administrative organs should limit their interventions both in the economic process to a minimum - which can be explained as a reaction to mercantilism with its extensive, but mostly conceptual-free dirigism - and in the private ownership of the means of production , in order to be one to ensure free economic activity for people. One was in favor of the abolition of serfdom and guilds . François Quesnay, one of the main authors of the theory of physiocracy, according to Tableau économique (1758) , conceived the economic cycle model analogous to the blood cycle and a three-class model of macroeconomics demonstrated the interdependencies of the economic sectors . Quesnay made the following prerequisites for the functioning of his circular model: free pricing, free trade, a capitalist leasing system as well as the flow of money and goods exchange between three classes, the productives or peasants and farmers, the stériles or artisans, merchants, traders and the propriétaires the nobles and landowners. For Quesnay, ensuring the continuous flow of money was essential for a country's prosperity. An accumulation of money capital should be prevented, since retention would be detrimental to economic activity.

The theorists of the Physiocracy divide society according to its economic meanings, so one spoke of the most important group, the class productive . These were people working in agriculture, such as farmers and tenants, but not agricultural workers. The nobility, the church and the king were referred to as the group of landowners, the classe propriétaire . This group did not generate any goods, but they reintroduced basic rents into circulation, a prerequisite for net economic income ( French: produit net ). The unproductive group, classe stérile , was understood to mean the merchants and the artisans; they formed the group who only added their own work to the economic process without creating new values. Thus, the cycle consisted of by the individual groups or classes in the annual reproduction classes introduced into the economic process capital. Full reproduction was only conceivable within the ordre naturel , but the cycle could also end within an ordre positif with both an economic plus and a minus.

Human coexistence was explained in the physiocratic sense as a combination of ordre naturel , the natural law of the Enlightenment, and ordre positif, i.e. the law created by man. From the principles of natural law, the physiocrats derived an independent and objectively given norm , from the observance of which the greatest possible welfare for all people could be achieved. Nevertheless, by spontaneous action of individual people, none of these natural order, according to a social contract, could be brought about. Rather, an order would not only be constituted by an enlightened ruler, but would also be guaranteed, precisely the ordre positif, which would then correspond to a natural order in the broadest sense.

Because the value of labor, i.e. what a farm laborer needs to live, was assumed to be a naturally determined constant. The farm worker usually produces more than he needs to live. This connection is most evident in agriculture, where expenditure and yield can be compared in natural units. Therefore, the physiocrats consider farm labor to be the only productive work, and rent as the only form of surplus value. Profit for the capitalist appears only in the form of income, which he receives as a kind of wages for his livelihood. Interest in money is declared to be usury contrary to nature .

The physiocrats can assert a further insight for their point of view: if one assumes a closed economy, then the other economic participants live on the yield of the land, in whatever form; its respective productivity sets certain limits to growth.

It was to the great merit of Quesnay that the forms of economic processes were viewed as physiological forms of society; H. as forms arising from production itself, independent of will, politics, etc. However, they were considered to be equally valid for all social formations. This is how they saw the forms of capital in circulation, which Adam Smith later only had to name " fixed capital " and " circulating capital ".

The cycle model of the Tableau économique , developed by the Physiocrats, models economic interdependencies for the first time and can therefore be called the forerunner of a national accounting system. They also recognized the importance of net investment and capital accumulation for the first time .

They called themselves économistes . Physiocracy is formed from the Greek "rule of nature". The term was coined in 1768 by Pierre Samuel du Pont de Nemours (see there).

Richard Cantillon , an Irish banker in France, formulated the physiocratic ideas in 1756 in the Essai sur la nature du commerce en géneral (essay on the nature of commerce in general). Later these ideas were systematically developed by François Quesnay and Vincent de Gournay .

The main exponent of Physiocratism was the French François Quesnay (1694–1774). Quesnay was the personal physician of Louis XV. He transferred the blood circulation, discovered by William Harvey in 1628 , to the social fabric, especially to the economy . With his Tableau économique , Quesnay designed the first model of an economic cycle with the components creation, use and distribution (= historical basis for the concept of the national product ). This macroeconomic model is implemented through acts of exchange between the social classes, the classes being seen from a purely economic point of view.

A student of Quesnays was Jacques Turgot (1727–1781), who from 1774 to 1781 was General Controller of Finance and then Minister of Finance under Louis XVI. was. In his functions he was able to realize some of the ideas of the Physiocrats in the economic policy of France. Other ideas such as tax reform or the abolition of the guilds failed due to resistance from interest groups and ultimately led to Turgot's removal.

The suspension of fixed prices on basic foodstuffs that he carried out made the situation in France much worse.

After Quesnay's death, physiocracy lost its influence. Some of his teachings can still be found in the tax reform of Josef II in Austria or later in Baden in the "Einsteuer". The physiocratic ideas at the beginning of the 20th century were newly taken up and linked with anarchist and free-economic ideas. Special mention should be made here of Georg Blumenthal , editor of the magazine Der Physiokrat, and Silvio Gesell , the founder of free economics.

The fundamental thesis is that agriculture alone produces an added value, a surplus (the mercantilists attribute wealth to trade).

A concrete demand on politics was therefore the withdrawal of the state from economic affairs, from Vincent de Gournay in 1751 in the famous words Laissez-faire , laissez-passer , le monde va de lui-même! collected.

The physiocrats set against the mercantilist maxim of increasing the wealth of the absolutist ruler, the concept of "natural order" ( ordre naturel ). This can be recognized with the help of reason. It is the government's task to adapt the actual political order ( ordre positif ) to the natural order and to abolish all laws that contradict the natural order.

The Physiocrats did not have much influence on the economic policy of absolutist France, but they did on the later theories of Adam Smith , who had contact with the Physiocrats during a stay in Paris 1764–1766.

Since the national economist Johann August Schlettwein is said to have convinced the margrave Karl-Friedrich of this system, the only known attempt to introduce this economic theory was made between 1770 and 1801 in the margraviate of Baden in three model villages, namely in Dietlingen , Bahlingen and Teningen .

For Karl Marx there was a strong irony in the fact that the first bourgeois economic theory appeared in the guise of feudalism: The first condition of capitalism, the separation of labor and capital, is presented as a law of nature; but the capitalist appears in the form of the landowner; the capitalist as an unproductive consumer. This confusion, however, was the reason that property was primarily taxed. This gave industry tax privileges, was largely free of state intervention and was primarily left to competition. The feudal appearance was therefore entirely conducive to the development of capitalism.

Use of the word today

In the discussion about the limits of economic growth today, the term “physiocrat” is used disparagingly. Physiocrats are accused of the “pessimism” of Thomas Robert Malthus , who mainly saw physical limits for population growth . Today physiocrats are criticized for failing to see the possibility that qualitative growth and immaterial growth (e.g. by shifting growth from the industrial sector to the service and information sector ) overcome the limits of physical growth in a “weightless world” could. In the past, immaterial growth went hand in hand with material growth, the former organized the latter: within a short period of time, the energy expenditure per capita of the human population multiplied by orders of magnitude in a way for which there is no historical example. In the modern age, agriculture, the starting point of physiocracy, but increasingly also an element of the energy industry. The hope for immaterial growth is contrasted today with developments that brought about the concept of physiocracy. A positive evaluation of the physiocrats under the aspect of the preservation of the natural foundations of the economy gives z. B. Immler (1985).

Representations of the Physiocrats (selection)