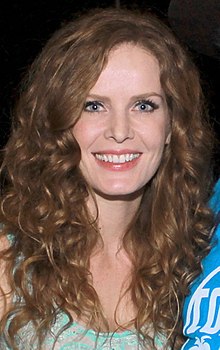 Mader worked for a time as a model in New York City , where she a. a. worked for L'Oréal , Colgate and Wella . It was through the US - soap opera All My Children known in 2003 as they Morgan Gordon was seen. In 2006 she was one of the main characters in the lawyer series Justice - Not Guilty , which was canceled after only a 13-part season. She also gained further international fame when she took on the role of Charlotte Lewis in the television series Lost , in which she was one of the leading actors in 2008 and 2009. In 2010 she made other guest appearances in the final season of the series. After leaving Lost in 2009 , she was seen in the movie Men Who Stare at Goats alongside George Clooney and Ewan McGregor .

Other guest appearances on television series followed, including My Superhero Family and Law & Order: LA . In May 2012 Mader appeared as a guest actress in two episodes of Fringe - Borderline Cases by the FBI .

She was first seen on a theater stage in June 2013 at the Hollywood Fringe Festival, where she starred as Barrie in The Third Date . In the third season Mader took on the fantasy series Once Upon a Time - Once upon a time ... a leading role as the Wicked Witch of the West. After she made guest appearances again in the fourth season, it was announced in June 2015 that she will join the ensemble as the leading actress in the fifth season.