The Rhine Museum in Koblenz-Ehrenbreitstein 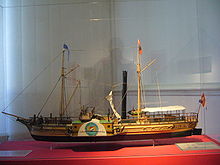 Paddle steamer De Zeeuw , the first steamship on the Rhine

The Rhein-Museum Koblenz is a cultural-historical museum in Koblenz that shows life on the Rhine from different aspects. The museum, founded in 1912, focuses on shipping , ecology , hydrology , Rhine romance , tourism , economy and history.

On July 20, 1912, the “Rhein-Museum e. V. “on the initiative of the then regional court director Dr. Wilhelm Spies founded in Koblenz. Baron Georg von Rheinbaben chaired the founding meeting . The aim of the association was to build a museum to document the cultural landscape of the Rhine. This concern was supported by all states bordering the Rhine. The first museum building was set up in the former girls' school of the parish St. Kastor in the Koblenzer Rheinanlagen (Rheinzollstraße) not far from the Kastorkirche . In 1919 the museum had 10,000 visitors.

In 1944 the museum was destroyed by bombs . It stood in ruins until the 1980s and was then rebuilt. Today there is a restaurant on the ground floor. The inscription Rheinmuseum on the front has been preserved.

Since it reopened in 1992/93, the current Rhein-Museum Koblenz has been located in the old elementary school in Charlottenstraße in Koblenz's Ehrenbreitstein district , right at the foot of the fortress of the same name .

In addition to the development of navigation on the Rhine , the museum also shows objects from the time of the Neanderthals to the 20th century on 1300 m² . Each room is dedicated to a specific topic:

An extensive library is available to visitors. The booklets contributions to the Rhine customer since 1926 are published in loose order .

The Rhine Museum is housed in the old school in Koblenz-Ehrenbreitstein. It was built at the instigation of Empress Augusta from 1887–1890 on the riding arena of the coin barracks housed in the neighboring stables . A quay wall of the former Ehrenbreitstein harbor can still be seen behind the museum . The old school is a three-storey brick building with seven axes over a high base. In the middle of the building, on the front as well as on the back, a flat central projection with a gable is highlighted, behind which the stairwell is hidden. The building with arched windows is different in color due to the materials used. Greywacke on the base, the walls made of yellow brick, structured by strips of red brick. The entrance corridors are flat arched , there were a total of eight classrooms on the two main floors, the top floor originally housed three teacher's apartments. After the Rhine Museum moved in in 1994, an extension was built in 2000.

The building of the Rhine Museum is a protected cultural monument according to the Monument Protection Act (DSchG) and entered in the list of monuments of the state of Rhineland-Palatinate . It is located in Koblenz-Ehrenbreitstein at Charlottenstrasse 53 a .

The Rhine Museum building has been part of the Upper Middle Rhine Valley UNESCO World Heritage Site since 2002 .