Roderick George Toombs , better known by his in-ring name "Rowdy" Roddy Piper , (born April 17, 1954 in Saskatoon , Saskatchewan , † July 31, 2015 in Hollywood , California , USA ) was a Canadian wrestler and actor of Scottish descent . He was best known for his impulsive manner and the characteristic attacks of anger, which earned him the nicknames "Rowdy" and "Hot Rod". In 2007 he was inducted into the Professional Wrestling Hall of Fame.

After being expelled from school and having an argument with his father, he ran away from home and stayed in youth hostels. He began his wrestling career at the age of 15. He lost his first match against Larry Hennig ( Curt Hennig's father ), who was twice as difficult and 20 years his senior, in just 10 seconds. Before he could make any money wrestling, he was not only an amateur wrestler but also a boxer. He won the "Golden Gloves Boxing Championship". He also had the black belt in Judo (American Judo Champion). His stage name Roddy Piper developed from the fact that he was announced on his very first appearance as "Roddy The Piper" (Roddy the bagpiper). The ring announcer improvised his name based on his entrance music. From then on he wore a kilt and, at times, a bagpipe to the ring, and served the stereotype of a Scotsman.

Between 1973 and 1975 Piper was active as a jobber in various regional leagues, all of which belonged to the AWA umbrella organization. At the turn of the year 1975/1976 Piper advanced to the top heel at NWA Hollywood Wrestling. He then started to work at NWA San Francisco Wrestling, where he also trained his "rowdy" character . For three years he feuded with Chavo Guerrero Sr. and the Guerrero family. In 1979 he moved to Pacific Northwest Territory, where he was allowed to win the NWA Pacific Northwest Tag Title in a team with Tim Brooks , Rick Martel and Mike Popovich . Piper was also able to hold the NWA Pacific Northwest Heavyweight Title once.

In late 1980 Piper went to Mid-Atlantic Territory and soon won the Mid-Atlantic Title and the US Title. In 1981 he became a commentator for Georgia Territory . In 1982 he turned down an offer from the World Class Championship Wrestling and instead went to Puerto Rico for a month and then back to the Mid Atlantic. He was feuding here with Ric Flair , Sgt. Slaughter and Greg Valentine for a while .

In 1984 Piper moved to the World Wrestling Federation (WWF for short / now WWE) and only worked as a manager for a short time due to an injury. Later he became a star in the WWF alongside greats like Hulk Hogan and Randy Savage . He got his own talk show Piper's Pit there , which became a popular segment of the show. In an issue of Piper's Pit he smashed a coconut on Jimmy Snuka's head, which is still legendary today. Roddy Piper was one of the most hated, but also one of the most popular superstars. The only title Piper could win in his early days in the WWF was the Intercontinental Championship .

His most famous appearances in the ring include the main event of the first Wrestlemania , a boxing match with Mr. T in Wrestlemania II and the match against Bret Hart in Wrestlemania VIII. In Wrestlemania III he met John Carpenter , who supported him in his career as a film actor. Carpenter cast him as the lead actor in his film You Live . The rest of Piper's film career, however, was in the area of ​​so-called B-films . 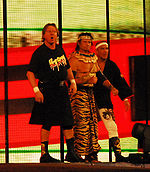 In late 1996, Piper went to World Championship Wrestling . He had feuds here with Hulk Hogan , New World Order , Ric Flair, Randy Savage , Bret Hart, and Goldberg . In early 1999 Piper held the US title for a short time and left the organization in 2000. In 2002, he published his biography In the Pit with Piper: Roddy Gets Rowdy and was then seen for two years at WWE events. In 2004 he appeared on Total Nonstop Action Wrestling shows . On April 2, 2005, Piper was inducted into the WWE Hall of Fame , gave a speech and was also seen the following day on WrestleMania 21 on his talk show Pipers Pit .

2006 saw him again several times at the WWE. At Cyber ​​Sunday in early November 2006, Piper was also rewarded with another gold. Together with Ric Flair , he won the Spirit Squad's World Tag Team Championship . The reign ended shortly afterwards when they had to give their belts to Randy Orton and Edge . The background to this was that Piper had to take a break due to cancer and was undergoing rehab at the end of 2006. But he promised to conquer cancer and return. He finally kept his promise on January 27, 2008 at the Royal Rumble Match at Madison Square Garden in New York City , where he returned to the ring, surprisingly for the fans. After that, Piper made occasional guest appearances.

Since April 17, 2014, Piper was seen as a participant in the show WWE Legends' House on the WWE Network.

On July 31, 2015, Roddy Piper died in his sleep at his Hollywood home at the age of 61 from cardiac arrest . He left behind his wife and four children and four grandchildren.

His best-known films are you live ( They Live ), directed by John Carpenter and science fiction - cult film The Hunter - A merciless hunter ( Hell Comes to Frogtown ).

He also appears in the video game Saints Row IV , where he also dubbed himself.