Family coat of arms of the Roeder von Diersburg 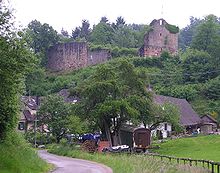 Ancestral castle of the family was Hohenrode (also called Brigittenschloss , built in the middle of the 11th century, ruin after 1524) near Sasbachwalden . From the Ortenau the family first spread to Alsace . The first verifiable family member is Burcard von Hohenrod , documented April 12, 1197. The progenitor of the only remaining main line of Renchen (later von Diersburg , after the rule Diersburg acquired in 1455 ) is the squire Dietrich the Elder Roder, documented in 1381.

In 1474 the family was one of the founders of the Swabian Imperial Knighthood , Canton of Ortenau.

During the 18th century the Barons Roeder von Diersburg belonged to the imperial knighthood in the knightly canton Neckar , district Ortenau, of the Swabian knightly circle , because of the rule Diersburg . 1802 were Philipp Ferdinand, Philipp Friedrich Karl Ludwig August, Georg, Ludwig and Egenolf Christian Roeder von Diersburg, Lords of Diersburg and Reichenbach. On May 9, 1742, members of the family were enrolled in the knightly district of Lower Alsace , after the family had already resided there in the year 1680 and belonged to the knighthood with their goods. The French recognition of the baronage took place on August 6, 1773 in Compiègne, the grand-ducal Baden confirmation of the use of the title of baron (for the entire family) on April 24, 1911 in Karlsruhe.

The progenitor of the lines that flourished around 1865 is Georg VI. (1556-1601). He was a German knight, left this order in 1587, converted to the Lutheran denomination and married Ursula, née von Fegersheim. His sons Franz Sebastian and Georg Friedrich donated the lines:

Gut Diersburg (Philippshof) in Baden is still run by the family as a winery today.

The manor Völkershausen in Hesse came to the Barons Roeder von Diersburg in the 20th century through an inheritance from the von und zu Gilsa family . The local Gut Marienhof (Völkershausen) is a separate farm that also belongs to the family.

The same coat of arms in a different tinge , a black eagle in gold, was also used by the Alsatian family of Eytingen.

This Roeder family must be distinguished from some sexes with identical names: the Röder (Roeder) belonging to the ancient nobility of Anhalt, who first appeared in 1339 with Hans Reder and received a confirmation of the status of a Württemberg baron in 1835; Roeder from Lower Franconia, since 1526 on an estate in Rödelsee, who have appeared in the nobility in Silesia since 1761; Roeder (Röder) belonging to the Vogtland nobility with the presumed parent company Rodau near Plauen, who first appeared in 1333 with the knight Heinrich Roder and were enrolled in the aristocratic class in the Kingdom of Bavaria in 1813; Roeder, who was ennobled by Prussia in 1798, whose progenitor was the royal Prussian councilor and dean of the St. Sebastiani monastery in Magdeburg, and the Roedern belonging to the Silesian nobility , who first appeared in 1287 with Tilemann von Reder (de rotis) , in 1612 the imperial barons and in 1669 received the Bohemian count.