The Schleicher ASK 21 is a two-seater glider in GRP construction as a middle - wing version with a damped T-tail unit for training, aerobatics , performance flying and, under certain conditions, cloud flying. The glider index is 92. Along with the Schleicher ASK 13  - the successor to which it was designed - or the Twin Astir, it is one of the most widely used aircraft for training gliders.

The ASK 21 was designed by Ing. Rudolf Kaiser as the successor to the popular ASK 13 to meet the need for a modern two-seater that closes the gap between training and single-seat high-performance gliders. The ASK 21 is the first fully GRP two-seater from the manufacturer Alexander Schleicher and the last fully GRP glider in production (as of 2016 [obsolete] ). The prototype first took off in December 1978 and production started in 1979. The United States Air Force Academy procured five ASK 21s under the designation TG-9 for their training program in 1986 and 1987 . The aircraft is still in production and over 900 have been built. In December 2004 the ASK 21 Mi took off as a self-launching training aircraft for its maiden flight.

In July 2018, the first flight of the ASK 21 B, a version of the glider that was revised in detail, took place.

The two pilot seats, which are arranged one behind the other, are equipped with double controls as well as adjustable seat shells and rudder pedals. If the pilot does not have the necessary minimum weight, the necessary trim weights can be screwed in the form of lead plates in front of the front seat. Due to the position far in front of the center of gravity, each kilogram of lead can compensate for 1.25 kg of the missing pilot weight in the front seat. The fuselage shell consists of a tube sandwich and thus offers passive accident safety with a low component weight. The two-part, cantilevered middle-decker wing is a single-spar fiberglass construction without flaps , but with air brakes that work over each wing. The wing tips are pointing downwards, which enables take-off with the wing lying on the ground, but this only applies to aircraft towing and not winch towing.

The T-tail has a fixed horizontal stabilizer and an elevator with spring trim and automatic or, in older versions, manual connections. The chassis consists of two non-retractable wheels. The main wheel lies behind the center of gravity of the aircraft and has a disc brake . It's aerodynamically clad, which makes inflating the bike a little difficult. The tail unit is provided with a rubber spur or a tail wheel .

The ASK 21 Mi has a single-disc Wankel engine as drive, which delivers 41 kW (56 HP) at a speed of 7700 / min. A self-start is possible without any problems. The nose wheel is coupled to the rudder on the "Mi". There are also rollers in the wing tips - so you can roll and take off with the wing on the ground without an assistant. The ASK 21 Mi is only approved for simple aerobatics because of its larger dimensions.

The normal operating time of 12,000 hours can be increased to a maximum of 18,000 hours with certain measures.

The ASK 21 B has an enlarged cockpit interior, a larger main wheel and a rear wheel. In addition, automatic rudder connections were installed in the fuselage for the air brakes and ailerons, and a spin ballast container was located within the fin.

Airfoil profile gives good slow flight characteristics (nominal stall -Speed for single pilot about 65 km / h), making it possible even weak thermals to exploit. The flight characteristics are very good-natured: It is almost impossible to bring the ASK 21 into a tailspin , even in a deep stall it remains easy to control. There is, however, the possibility, by attaching lead weights to the tail unit, to shift the center of gravity so far back that spinning is possible for safety instruction and aerobatics. In a single seat, the ASK 21 climbs in thermals almost like a K 8 . The performance in high-speed flight is far behind that of more modern gliders. For distances up to 500 km, however, it is always suitable in good weather. In addition, it is also a good-natured aerobatic plane and is therefore used a lot in aerobatic training.

ASK 21 with the hoods open when preparing for take-off. 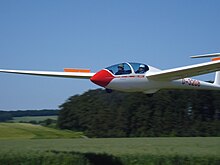 Not standard instrument panel of an ASK 21 for tall people

Technical data of the ASK 21 Mi

Only the data are given that have changed compared to the pure glider.

Training gliders and powered gliders for the US armed forces