Ore carts near the former miners' settlement of St. Martin

The Schneeberg is a mining area in the area of ​​the municipalities of Moos in Passeier and Ratschings in South Tyrol .

On the Schneeberg there is one of the former highest mines in Europe (2000 to 2500 m), which was operated from the Middle Ages until 1985, as well as the once highest permanent settlement in Europe that was inhabited all year round. Part of the South Tyrolean Mining Museum is now located on the complex . 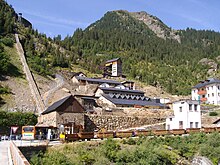 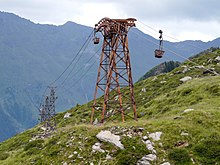 Former material ropeway for transporting ore in the Lazzacher Valley

The area of ​​the mine is not only located directly on the Schneeberg itself, but is divided into several locations around the Schneeberg. While the actual deposit and the mining area and the historic mining village in St. Martin am Schneeberg in the back passeier are m to around 2,354 level, there are the reprocessing and transport facilities, administrative building and a modern mining village at the end of Ridnauntals near the village Maiern. The main part of the mining museum is located there today. The associated exhibition tunnel is not part of the former mine, but was driven later for demonstration purposes.

From there, a material and a separate passenger cable car run along the Lazzacher Valley to the Poschhaus , an alpine hut that was originally built to feed the miners and has now fallen into disrepair. The material ropeway replaced a previous transport system made up of brake mountains and horse-drawn tram lines , the ruins of which can still be viewed today. Both cable cars have been shut down since they closed down.

About the Schneebergscharte ( Kaindljoch ), as part of a tour of the Poschhaus tunnel or by a rise of the Timmelsjochstraße the former mining village can be St. Martin reach. Formerly another tunnel , the Kaindl tunnel , led through the mountain below the yoke . This is now done wrong , but is discussed on the recent opening. Several buildings of the settlement have been preserved, including the former administration building, which is now managed as a snow mountain hut. The actual mining area is exclusively on the Passeir side of the Schneeberg in the vicinity of the former settlement.

The last part of the mine is located below St. Martin in Seemoos . From there a path leads to the Timmelsjochstrasse.

Silver , lead ores containing silver , copper ores and finally zinc blende were mined one after the other on the Schneeberg .

They were extracted for a long time with mallets and iron , and it was not until 1680 that the black powder, which was found by the monk Berthold Schwarz in the 14th century, was used for tunneling . From 1920 this is replaced by dynamite .

In 1927, 11 pneumatic hammers were already in use, and the dismantling process continued to be mechanized in the years that followed. Nevertheless, the last mine mule was not released from service until 1960.

The first documentary mention of Schneeberger silver (“ bonum argentum de Sneberch ”) as a medium of exchange can be found in a legal act that the Bolzano notary Jakob Haas issued in 1237. However, caves - so-called copper holes - were found on the area , which suggest mining activity as early as prehistoric times. The place where the glacier man Ötzi was found , who carried objects made of copper with him, is only about 25 km as the crow flies.

As early as 1360, the silver that was superficially accessible by leaching seems to have been mined, so that mining activity temporarily ceased as a result. In the 14th century the mine was subordinated to the newly founded mountain court Sterzing - Gossensaß . In 1486 the population in the remote mining settlement of St. Martin reached its maximum with around 1000 miners . Various bourgeois families held shares in the pits. Even today ore steps in Sterzing townhouses testify to the wealth of different families. In 1524 the Fuggers got on the Schneeberg and increased their shares several times.

As early as 1580, however, the Fuggers tried to sell their part again because of the emerging unprofitability. As a result, the number of employees continued to decline. After private investors withdrew by 1772 at the latest, all shares were in the hands of the Tyrolean rulers. In 1798 the mining operations on the Schneeberg were officially closed, but a few miners operated self-lean mining.

In 1809, the Tyrolean freedom fighter Andreas Hofer went into hiding after the second battle on Bergisel am Schneeberg.

Shortly afterwards the Schneeberg was subordinated to the kk mountain and hut administration, whereupon investments were made again in the operation. An appraisal confirmed the Schneeberg to be “one of the greatest ore deposits in Europe”. Now mining focused on zinc blende . As a result, from 1871 what was then the largest above- ground conveyor system was built on rails, which lifts from the deepest pits in Seemoos am Schneeberg over two water tons , through the Kaindl tunnel , over six Bremsberge and horse-drawn trams in the Lazzacher and Ridnaun valleys to Sterzing to the new one built Brenner Railway led:

After the First World War , South Tyrol and with it the state mine fell to Italy in 1919 and was subsequently leased to various companies. In 1926 the material ropeway to Maiern was built, which initially led from St. Martin over the Kaindljoch to an intermediate station at Poschhaus, and replaced the previous conveyor system. Only the Seemoos water barrel elevator remained in operation until 1967.

Between 1931 and 1937 the company was shut down due to the global economic crisis . During the Second World War , despite the exemption of the miners from conscription, there was a shortage of workers. On June 29, 1944, Sachsenz Bergwerksgesellschaft mbH was entrusted with the temporary management of the mine. After the end of the war, the workflow returned to normal. 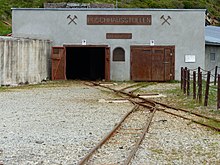 Entrance to the Poschhaus tunnel

After the completion of the Poschhaus tunnel in 1967, which was from then on used to transport the ore to Maiern, and after the fire of the large workers' huts in St. Martin in the same year, the permanent settlement on the mountain was finally abandoned after centuries, especially since the workers with a new one built cable car could be transported from their quarters in Maiern to their workplaces. At the same time, the upper parts of the material ropeway over the Kaindljoch were dismantled. In 1979, operations were temporarily suspended and, after further explorations, the mine was finally closed in 1985. The last operating company began to dismantle or demolish installations on the Schneeberg.

From 1986 the South Tyrolean provincial government planned a mining museum , which was opened in 1993 after completion of the construction and safety work and the completion of a gallery.

Even at the time of the mine, an inn on the Schneeberg offered accommodation and food. Today there is an alpine refuge in the former manor house (mine management from the Austro-Hungarian Empire) with the Schneeberghütte . The area is made accessible to tourists with, among other things, historical educational trails and can be used as a starting point for tours into the surrounding mountains. In the area of ​​the Lazzacher valley and in the former mining area, educational trails have been created. Various guided tours are offered through the area.

A comprehensive exhibition on mining in South Tyrol is now housed in the former processing plant. There the mining on the Schneeberg and the processing of the broken ore in Maiern are described in detail.