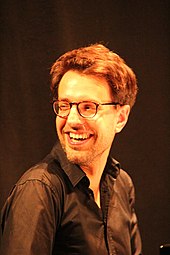 Sebastian Aaron Sternal (* 1983 in Mainz ) is a German pianist and composer of modern jazz .

Sternal took piano lessons from the age of six and came to jazz through his teacher at the age of eleven. Since 2003 he has been studying jazz piano in Cologne with John Taylor and Hubert Nuss , from 2007 composition at CNRS Paris with Hervé Sellin and then again in Cologne with Joachim Ullrich . First he played in the state youth jazz orchestra of Rhineland-Palatinate and then was a long-time member of the federal jazz orchestra under the direction of Peter Herbolzheimer , for which he also worked as a lecturer.

Sternal has worked with musicians such as Dee Dee Bridgewater , John Ruocco and John Riley ; Concert tours have taken him through Europe, the USA, Namibia and South Africa. In 2009 his debut album Eins was released , and in 2010 the second trio album Paris . In addition to his trio with Sebastian Klose (bass) and Axel Pape (drums), important projects included a duo with Claudius Valk , the quartet of Luxembourg saxophonist Maxime Bender and the trio with Parisian vocalist Anne-Marie Jean and bassist Simon Tailleu ; his project Sternal Symphonic Society brings together musicians from jazz and classical music in an eleven-person formation that includes Niels Klein , Christoph Möckel , Frederik Köster , Klaus Heidenreich , Pablo Held , Robert Landfermann and Jonas Burgwinkel as well as a string quartet .

In 2014 Sternal won the New German Jazz Prize with his duo partner Claudius Valk . In 2016 he was awarded the Mainz Jazz Prize.