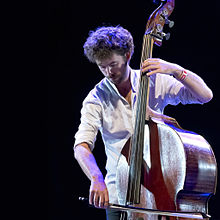 Tailleu, whose father is an amateur jazz musician, received classical piano lessons from the age of six. When he was 15, his father asked him to accompany him and his friends on the electric bass. He received three years of instruction at the Institut musical de formation professionnelle in Salon-de-Provence. At the end of his studies, he received the gold medal of the Conservatory for the best graduate. Between 2006 and 2010 he completed a master's degree at the Conservatoire national supérieur de musique et de danse de Paris with Riccardo Del Fra .

Tailleu played in 2005 in the group Newtopia of Raphaël Imbert (with Yaron Herman , Zim Ngqawana , Stéphane Caracci and Cedrick Bec). In 2008 he founded the quartet Tout Finira Bien with Gilles Bourgain, Florent Hubert and Stéphan Caracci, with whom he has released two albums so far. He performed regularly in France and performed at festivals such as the Antibes Jazz Festival , the Banlieues Bleues Festival and Jazz in Marciac . He toured Europe with the trio of Yaron Herman and Asia with Thomas Enhco . He accompanied Youn Sun Nah for four years . He also played in the media ensemble of Pierre de Bethmann .

Tilleu was also a member of Didier Lockwood's Jazz Angels (with pianist and violinist Thomas Enhco and drummer Nicholas Charlier ) and has been a member of Émile Parisien's Sfumato quintet since 2015 . He also played with jazz musicians such as Walter Smith , Marcus Gilmore , Michel Portal , Stéphane Belmondo , Alexandra Grimal , Vincent Peirani , Biréli Lagrène , Nikolas Anadolis and Federico Casagrande. He can also be heard on albums by Yochk'o Seffer , François Cordas, Paul Lay , Sylvia Versini and the Aum Grande Ensemble .

In 2005 he and Imbert's band Newtopia won first prize as the best group at the La Défense national jazz competition . In the following year he received the first composition award there and the second group award with the group In & Out . In 2011, he and the Enhco brothers won the group prize at the Montauban International Competition.