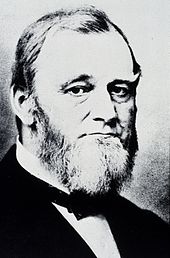 Spencer Fullerton Baird was born in Reading , Pennsylvania . He began his studies at Dickinson College in Carlisle in 1836 and graduated here in 1840. As early as 1838 he met the ornithologist John James Audubon , who gave him part of his bird collection and thus shaped Baird's main area of ​​research. In 1841 he traveled on foot on an ornithological excursion through the Pennsylvania Mountains, where, according to contemporary witnesses, he covered 650 kilometers in 21 days and 95 kilometers on the last day.

After Baird studied medicine for a few years , he became professor of natural history at Dickinson College in 1845 , where he also took over the duties of the chair of chemistry and gave courses in physiology and mathematics from 1848 (?) . He was also the curator of the college's scientific collection. This wide range of interests made Baird one of America's best known general scientists and polymaths of his day. 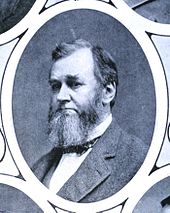 Between 1850 and 1878 Baird was an advisor ( Assistant Secretary ) to the Smithsonian Institution in Washington, DC , where he was mainly responsible for promoting young scientists in the Megatherium Club . With the death of Joseph Henry in 1878 he became director of the museum, and from 1871 until his death he was US Commissioner of Fish and Fisheries . The Smithsonian was expanded under his direction to the American National Museum of Natural History.

During his tenure at the Smithsonian, one of his main responsibilities was looking after employees with a very wide range of work areas. As a result, his work also concentrated on a wide variety of topics, including iconography , geology and mineralogy , botany , anthropology , general zoology and ornithology. For several years he published an annual magazine which presented the progress in all research areas. In addition, between 1850 and 1860 he advised various expeditions set up by the government for the scientific investigation of the western territories of the USA and developed for them instructions for the scientific collection. In 1848 he was elected to the American Academy of Arts and Sciences , in 1860 a member of the German Academy of Natural Scientists Leopoldina . In 1864 he became a member of the National Academy of Sciences .

Baird died in the large marine biology laboratory in Woods Hole, Massachusetts , which was set up primarily for his dedication and was intended to combine scientific ichthyology with economic interests. In addition to a few other species, the Baird sandpiper ( Calidris bairdii ) and the Central American tapir ( Tapirus bairdii ) were named after him. The Baird Glacier and the Baird Mountains in Alaska also bear his name.

He first described 57 species of reptiles.

Spencer Fullerton Baird was one of the most important American zoologists of the late 19th century. He worked primarily as a sponsor of young scientists and in the expansion of scientific facilities. In the USA he was one of the first exponents of the theory of evolution , which was formulated by Charles Darwin . Together with Thomas Mayo Brewer and Robert Ridgway , he was one of the first to think about local differences in bird races and to suspect that the subspecies " nascant species " were emerging.

Spencer Fullerton Baird's list of publications comprised a total of 1063 entries from 1843 to 1882, of which 775 publications were articles in his annual reports. His most important works included:

Head of the Smithsonian Institution