Church from the southeast

South side with the construction seam

St. Jost in the Marburg district of Weidenhausen is the former infirmary chapel of the "Untere Sieche". It was built in the 14th century in the Gothic style. The small listed hall church with roof turret has a three-sided choir closure in the east. Since 1955/1956 it has been part of the eastern parish of the University Church of Marburg .

St. Jost was built at the beginning of the 14th century on the outskirts of the suburb Weidenhausen. The chapel belonged to the "Lower Sieche", a kind of women's hospice outside the city. Here women suffering from leprosy and other serious infectious diseases were cared for, pilgrims found refuge and the dying were accompanied. The chapel was dedicated to Jodokus , a plague saint who was also the patron saint of pilgrims. Even before St. Elisabeth of Thuringia , a Way of St. James led the pilgrims coming from East and Central Germany on their way to the grave of St. James the Elder in Santiago de Compostela through Weidenhausen, where the St. Jakob Hospice served as a hostel. A little east of St. Jost, an “Obere Sieche” for men was also built in the 14th century (on the corner of Alter Kirchhainer Weg and Georg-Voigt-Strasse), which had a chapel dedicated to St. Laurentius . The spiritual brotherhood of St. Jost, which had its seat in the Marburg Barefoot Monastery , was the bearer of the infirmary , while the Teutonic Order held the patronage . Both cemeteries became urban sicknesses for poor women and poor men from 1502. The Frauensieche was rebuilt as a two-storey half-timbered building in 1607 and the Männerieche in 1611. They later served as old people's homes. The "Upper Sieche" was demolished in 1962 and the lower one in 1969.

The chapel had an outer pulpit that was retained during the Reformation period. After its destruction in the Thirty Years War, it was restored in 1648.

With the introduction of the Reformation in 1527, Marburg switched to the evangelical creed. The infirmaries became urban poor houses, which were financed from the poor fund of the city, the "common god box". The St. Jost chapel was cared for in the post-Reformation period by the inhabitants of the “Lower Sieche”, who were also responsible for the daily devotions. The pastor of the Lutheran parish church St. Marien had to preach every two weeks. The cemetery for the two infirmaries was laid out in 1598 at the latest, possibly on the site of a former cemetery. It was occupied until 1952 and secularized in 1956. In the 19th century, the chapel became the property of the St. Jakob Hospital Foundation, while the Protestant church retained the right of use.

In the 1920s St. Jost served Rudolf Otto for liturgical experiments on "sacred service". His planned reforms of the worship service were influenced by the shape of the St. Jost chapel.

In 1936 the chapel was renovated. Due to dilapidation, it had to be closed in November 1955. The St. Jakob Foundation and the City of Marburg paid for the renovation of the building, and the regional church for the interior renovation. The segment arch in the central nave was renewed from clinker and concrete. In the area of ​​the choir windows, the painter Karl Faulstich exposed the remains of late medieval frescoes , which were plastered over again because of their poor state of preservation. In addition, pieces of equipment were renewed and the interior redesigned. The re-inauguration followed on January 26, 1957.

In 1955/1956 the chapel was connected to the parish of the university parish. Today the "chapel" is a popular wedding and baptismal church and is used for regular prayer. The old Weidenhäuser cemetery is now administered by the city of Marburg and used as a cemetery .

Baroque epitaph on the north side of the choir

Chapel on the listed cemetery grounds

West side with portal

The approximately geostete and easily aligned to northeast chapel was built outside the suburbs Weidenhausen. Today it is enclosed in the narrow strip between the city motorway in the west ( B 3 ) and the Main-Weser railway in the east. In the east there is a cemetery on which around 200 gravestones have been preserved, most of which date from the end of the 19th and the beginning of the 20th century. Three tombstones date from the 17th century. A sandstone wall surrounds the cemetery.

The unplastered chapel on a rectangular floor plan is made of rubble stone masonry made of red sandstone. It is from a verschindelten gable roof covered the small south with three gable dormers and is stocked in the north with a dormer. The vaulted polygonal choir with hipped roof is the oldest structure, which was later expanded to include the western part. Dendrochronological investigations have shown that the framework of the roof structure ( collar beam with ridge columns) was built around 1310, while the beams in the western part date from 1382/1383. The construction seam on the two long sides indicates a later renovation.

All rectangular window and the west portal have the garb of red sandstone and received their form at a later date. Only the three flat-pointed arched choir windows date from the Gothic period. The simple central window is flanked by two windows with a nun's head . The nave is illuminated on the long sides by two small rectangular windows. The south wall has another small rectangular window in the west in the area of ​​the walled up south portal, on the opposite side the walls of the walled up high rectangular north portal are visible. The west wall has two larger rectangular windows at the height of the gallery; the gable triangle is completely clad. The simple west portal with a straight lintel opens up the chapel. Above it is a building board made of red sandstone, which reports on a renovation in the middle of the 18th century: “RENOVIRT DURH THE CITY · MASTER BUILDING RAHT · SCHOPF HENRICH MARSCHALL AND IOHANNES ROS”.

On the north side of the choir is a three-part baroque grave monument of Martin Heurath (1604–1661) and his wife Petronella made of red sandstone. The middle writing field under a round arch has two winged angel heads in the spandrels and is framed by rocailles on the outside . The curved headboard above an architrave shows the couple kneeling in front of the crucified, flanked by volutes . The weathered base bears in a medallion , which is held by two dragons, an inscription with the Bible word from Rev 14,13  LUT .

The six-sided, shingled roof turret in the eastern third dates from 1738. It houses a bell that can be rung by hand with a bell rope in the nave. The tower shaft has arched sound holes on each side and merges into a pointed helmet, which is crowned by a weather vane.

View of the vaulted choir

The interior is closed off to the west by a wooden flat ceiling. The vaulted choir and the adjoining yoke have grooved cross ribs on small consoles that end in keystones . The keystone in the yoke is covered with a five-leaf Christmas rose, the one in the choir polygon with four oak leaves. A head with a pilgrim's hat is painted over it, which was painted over during a later renovation. In the south wall of the choir there is a simple, square piscina and in the north wall a corresponding sacrament niche. A Renaissance - Epitaph with a triangular pediment and coat of arms from red sandstone erected in the choir below the northeast window. It commemorates the lay judge Henrich Muntzel († 1581). The epitaph for Johannes Junck († 1659), which is hung on the southern wall of the choir, dates from the Baroque period. A field of inscriptions is framed by volutes and masks and crowned by a blown gable with a medallion.

The three-sided wooden gallery in the western part is inscribed with the year 1606 in the building inscription: "BVRCKHARDT WORMBSER ANTONIUS SAVR DER STADTBAVWMEISTER AO 1606". She has a turned wooden dock -Brüstung and green is taken . The profiles are set off in red. The gallery rests on four square columns with headbands and serves as the installation site for the organ. In the south-west corner, a staircase with docking enables access to the gallery.

The altar area has been raised by one step since 1956. The block altar of a cafeteria plate covered from red sandstone over slope. The crucifix and the plague cross of the original equipment (mid-14th century) are exhibited in the Marburg University Museum. The two altar lights and the wooden crucifix with a narrow, rigid body were designed by Helmuth Uhrig in the course of the church renovation in 1956. The baroque pulpit was not put up again after the church renovation, but was left to the Weidenhausen Erlengrabengesellschaft. The simple wooden church stalls from 1956 leave a central aisle free. 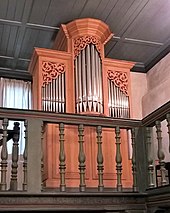 A small organ from EF Walcker & Cie. , originally built for the Philippinum Grammar School (Marburg) , was acquired in 1956. The East Frisian organ builder Martin ter Haseborg replaced it in 1997. The instrument is traditionally built in the Baroque style. The three-axis, timber-framed prospect has an elevated polygonal central tower that is flanked by two flat pipe fields. The cornices are richly profiled, the veil boards have bas-reliefs with acanthus work . The instrument has seven registers that are divided into two manuals . The pedal is attached. The actions are mechanical. The organ has the following disposition :