The title of this article is ambiguous. Further meanings are listed under Starhemberg (disambiguation) .

Starhemberg (formerly also Lords of Starhemberg ) is the name of an aristocratic family originally from Upper Austria ( Steyr , Steinbach ) who belong to the Apostle families and whose members were ennobled as imperial counts from 1643 and imperial princes from 1765.

Of the Apostles' families, i.e. those families that played a role in Austria during the time of the Babenbergs (976 to 1246), only three have survived to this day: the Liechtenstein family , the Abensperg and Traun family and the Starhemberg family. Gundaker von Steyr is considered to be the ancestor of the Starhemberg family .

Gundaker von Steyr was based at Wildberg Castle in the municipality of Kirchschlag near Linz . Around the middle of the 16th century, a Renaissance building with an arcade was erected between the tower and the Gothic castle. From 1664/65 the castle was built on the site of the former outer bailey. At the beginning of the 1920s, the roof of the old palace collapsed , turning the castle wing to the north into ruins, while the early baroque castle is still standing. Around 1750, 703 subjects belonged to Wildberg, including Auerberg and Lobenstein . The Wildberg line of the Starhembergers died out in 1857, the castle then fell to the Schaunberg-Eferdinger branch of the family. The property has been owned by the Starhembergers for over 800 years and is therefore the oldest family seat.

In 1559 the county of Schaunberg fell to the Starhembergers. The Schaunberg castle ruins , the largest castle ruins in Upper Austria, are still owned by the family in Eferding.

Starhemberg Castle , also known as Eferding Castle , has been owned by the Starhemberg family for around 450 years, with the exception of a brief interruption (from 1630 to 1660). The district castle built in the 12th century by the Diocese of Passau was sold to the Counts of Schaunberg in the 14th century. After the Schaunbergs died out in the 16th century, their heirs, the Starhembergers, had the castle built into a palace before the complex was changed in the classicism style during the 18th century. The current owner of the property was Georg Adam Fürst Starhemberg. The Princely Starhemberg Family Museum is located in the castle. A tour through the museum shows numerous memorabilia and finds from the family history of the Starhembergers. The Starhemberg family foundation located here sees itself as the mainstay of the family property. Six castles, 6000 hectares of forest property in Austria, plantations in Andalusia and a cattle ranch in Argentina are operated by around 70 employees.

In 1674 Konrad Balthasar von Starhemberg acquired Eschelberg Castle , which is also owned by the family to this day.

Blazon : The family coat of arms shows a fire-breathing, red (previously rarely also: golden) horned blue panther growing out of a red shield base ; on the helmet with blue-silver (earlier rarely also: blue-red) blankets the growing panther, the back of which is normally equipped with a red ridge, which is equipped with eight silver plumes. Since an imperial reform of the coat of arms on June 24, 1437, the panthers have been depicted crowned .

Member of the sex 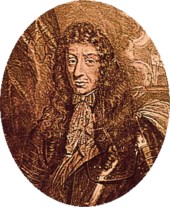 Heads of the Starhemberg family