This article deals with the Upper Austrian municipality, for other places with the same name see Kirchschlag .

Kirchschlag bei Linz is a municipality in Upper Austria in the Urfahr-Umgebung district in the upper Mühlviertel with 2201 inhabitants (as of January 1, 2020). The community is located in the judicial district of Urfahr .

Kirchschlag near Linz is at an altitude of 896  m above sea level. A. Höhe in the upper Mühlviertel , 10 km from the Upper Austrian capital Linz . The extension is 8.0 km from north to south and 3.7 km from west to east. The total area is 16.78 km².

The municipality includes the following localities (population in brackets as of January 1, 2020):

In 1349 the place was first mentioned in a document in connection with the Chappelln in the Chirchslag , whereby it is a branch church of Hellmonsödt .

At the end of the 17th century, real bathing began in Kirchschlag. The guests could use the Starhemberg country house and bath house with the Heinrich chapel for this purpose .

Between 1745 and 1748, the single-nave church of St. Anna was largely rebuilt in the baroque style by the builder Johann Matthias Krinner .

In the first half of the 19th century, Kirchschlag developed into a popular summer recreation and excursion destination for the people of Linz . This is evidenced, among other things, by the guest book of the bath house, which Franz Haiböck senior published in 1838 and which shows the names of numerous well-known citizens of Linz. In addition to painters and draftsmen such as Joseph Löw (1770–1842; 1809–1825 drawing teacher at the Linz normal school), Johann Hardinger, Joseph Edlbacher (1817–1868), Ludwig Haase (1827–1907) and Hugo von Grienberger (1827–1902) drew Kirchschlag also approached the naturalists. The Linz city doctor Johann Duftschmid (1804–1866) carried out botanical studies in Kirchschlag, the results of which he published in 1855 in the Austrian botanical journal under the title Die Flora von Kirchschlag .

The first bourgeois country house in Kirchschlag was built by the Linz master builder Johann Metz in 1858 on the southern edge of the Rudolfswald, which he sold to a Linz officer's wife in 1871 (Kirchschlag No. 25). In 1861, master builder Metz bought the building site for a second villa on the southern edge of the Schauerwald, the upper or small Metz villa at No. 27, which he built above the church and sold to Prince Camillo Starhemberg in 1873. Also on the southern edge of the Schauerwald, the Linzer soap boiler and bookseller family Haslinger acquired a building plot from Blümelgut in 1861, where the young bookseller Kamillo Haslinger, who had a lung disease, successfully cured his illness. In the 1870s the row of villas No. 32–34 was built between the church and the Bründl House. Towards the end of the 19th century, summer excursions were accompanied by winter hikes. At the same time, the first stage of the villa construction came to an end, as the railway traffic made the alpine regions of Upper Austria easier to reach as a recreational area and many Linz families moved their summer homes there.

Adalbert Stifter was Kirchschlag's most famous spa guest. Between autumn 1865 and 1867 he lived five times on the "Berg Kirchschlag":

For a walk, Stifter preferred to go to Glasau , where he posted letters to his wife Amalie and picked up her letters, and on to Hellmonsödt, where he looked for old furniture for his apartment in Linz. He wrote his novel Witiko , and his "Winter Letters" were published in the Linzer Zeitung .

Kirchschlag, which until then had belonged to the municipality of Hellmonsödt , was raised to an independent local church on January 1, 1921, and in 1924 was given a parish hall.

The state of Upper Austria acquired house no. 34 (Villa Grienberger) and opened it on June 1, 1925 as a children's rest home. On December 20, 1929, the province of Upper Austria bought the subsequent Deißinger Villa (No. 33) and on May 27, 1930 the Scheindler Villa (No. 26), the former country house of the Haslinger family, for the same purpose.

Between the two world wars, Linz's local mountains experienced the climax of their history as summer and winter hiking landscapes. Endless columns of day trippers climbed up between Lichtenberg and Breitenstein on Sundays.

In 1953 the Heinrichshof (No. 31) passed from the property of the Republic of Austria to that of the Province of Upper Austria, which established it as another children's rest home. In 1955 the Kirchschlag Ski Club was founded. In 1961 the construction of a new community hall began. The Anna Church was expanded towards the east after the Pesendorf beneficiary house was demolished.

Blazon : “A silver hill in blue, inside a blue disk, covered with a silver snow crystal. A golden sun breaking out of the upper right corner; on the left half a silver church starting from the edge of the shield with a buttress and on both sides of it a black arched window, the built-in tower on the left towering over the church roof with a black arched and above a round window as well as a curved helmet roof, a dome and a cross. “
The church colors are blue and white.

The municipal council has 25 members. 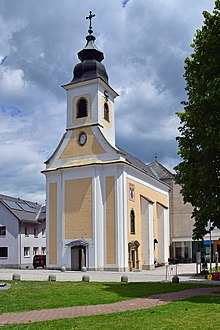 Cities and municipalities in the Urfahr-Umgebung district