The Viaduct Wilde Gera was up to the completion of Viaduct Froschgrundsee in 2011 with 252 m span the largest reinforced concrete arch bridge in Germany.

The bridge is located on the A 71 in the Thuringian Forest between the Gräfenroda and Oberhof junctions a short distance north of the Rennsteig tunnel and was built between 1997 and 2000. With a total length of 552 m at a maximum height of 110 m above ground, it spans the valley of the Wild Gera near Gehlberg with the state road (L 2149) running in the valley floor and the Neudietendorf – Ritschenhausen railway between Zella-Mehlis and Gräfenroda. Initially planned as a pillar bridge , the arched bridge was implemented as a special proposal in order to avoid the foundation of the piers in an old waste dump and on the decrepit railway embankment. The bridge has a radius of 7800 m and a longitudinal gradient of 2.56%. It cost around 45.8 million DM, which in today's currency would be around 30.8 million EUR.

On March 12, 2006, the engineers who planned the bridge were awarded the first German Bridge Construction Prize. The filigree design of the bridge and the adaptation to the landscape were praised .

The 3.74 m high superstructure consists of a single-cell steel trough 7.6 m wide at the bottom and 11 m wide at the top with inclined struts made of steel tubes and, designed as a composite cross-section , the 26.3 m wide reinforced concrete deck. The field widths of the 14-field superstructure are 30 m - 36 m - 10 × 42 m - 30 m - 36 m. The rest point of the superstructure with the fixed bearings in the longitudinal direction is in the apex of the arch. 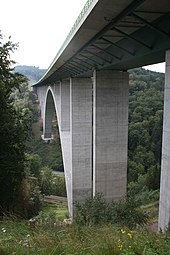 View towards the Rennsteig Tunnel

The steel superstructure was pushed in from the west abutment using the incremental launching method in sections with incremental lengths of 63 m. The reinforced concrete slab , the thickness of which varies between 20 cm at the end of the cantilever and 45 cm above the webs of the hollow box, was then produced with a formwork carriage in sections with a maximum length of 21 m.

In the middle of the bridge, the superstructure will be removed by a reinforced concrete arch with a span of 252 m. The arch cross-section is a 10.30 m wide two-part box girder with wall thicknesses between 30 and 40 cm. The construction height at the transom foundations is a maximum of 5.50 m and decreases to 3.30 m towards the apex. The transom foundations, in which the arch is clamped, are up to 6.00 m thick and have ground plan dimensions of 17 m × 14.5 m. The preparation of the sheet was carried in cantilever with cycle lengths of about 6 m. The arch was held with auxiliary guy lines that were anchored in the rock. During production, all structural deformations were monitored with the help of an extensive measuring program.

Bridge structures along the federal highway 71