Thilo Schoder grew up as the youngest of five children and from 1907 studied interior design at the Grand Ducal Sächsische Kunstgewerbeschule Weimar , the predecessor institution of the Bauhaus . After graduating in 1911, he worked as a trainee at the Grand Ducal Saxon Building Trade School Weimar with the then director Paul Klopfer . He then completed a traineeship with Josef Hoffmann as a draftsman and worked in the fashion department of the Wiener Werkstätte . Schoder returned to Weimar in 1912 to work in the studio of his teacher Henry van de Velde .

In 1916, Schoder became an artistic adviser for the Golde company in Gera and moved to Gera. With numerous designs and the construction of a factory building, Schoder realized the connection between artistic and industrial production. In 1917 he was called up for military service. After the end of the First World War , Schoder developed into one of the most important architects of New Building in East Thuringia . He was appointed to the German Werkbund in 1919 and to the Association of German Architects in 1922 . In March 1932 he gave up his office due to a lack of orders as a result of the global economic crisis and at the end of the year emigrated to Norway, the home country of his second wife Bergljot Schoder. In 1936 he received the Norwegian work permit as an architect and opened an architecture office in Kristiansand. Given the political conditions in Germany, he took Norwegian citizenship in 1938 .

From 1936 onwards, Schoder was involved in the expansion of the “Hannevik Terrassen” residential area: He created the general development plan and built several residential buildings. His efforts to gain more influence in Norwegian architecture were interrupted by the German occupation of Norway in World War II. In 1940 Schoder was arrested by the Gestapo because of critical statements in the local press about political developments in Germany . Then he was obliged to do planning work for the German armed forces in Norway. The political rehabilitation in the post-war period enabled Schoder to join the Norwegian Chamber of Architects. With numerous residential and commercial buildings, Schoder became the leading architect in southern Norway and advanced to become a protagonist of southern modernism . The Sørlandet Art Museum dedicated an exhibition to Schoder in 2002.

Thilo Schoder died in Norway at the age of 91; his son Bjørn Schoder has been running the office since the early 1960s.

His estate from the time before emigration (1932) is administered by the archive of the Academy of Arts in Berlin . 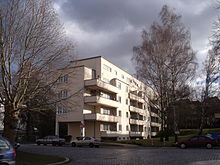 A Gera tram locomotive has been named in his honor since 2009 .