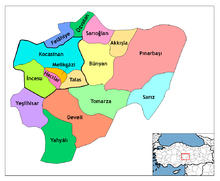 Location of the Tomarza County in the Kayseri Province

Tomarza is a district in the Kayseri Province of Turkey , which was still inhabited by Armenians at the beginning of the 20th century . It has 27,944 inhabitants. There are 3 communities and 46 villages in the district. It was declared a district in 1953, is 1330 m above sea level and has an area of ​​1485 km².

The deserted area "in the no man's land between Byzantium and the Arabs" was settled with compatriots by the Armenian-Byzantine general Melias at the beginning of the 10th century and raised to a Syrian-Orthodox metropolis in 954/957. In 1065 Emperor Konstantinos X. Dukas handed the place over to the exiled King Gagik of Kars. The Armenian Catholicos Gregor II resided here from 1065 to 1069 . At the end of the 19th century Tomarza still had 38 Turkish and a few Greek houses of 980 households , the remaining houses were inhabited by Armenians . In the village there were the churches Aziz Boğos and Bedros , in the eastern part the Surp Asdvadzadzin Mother of God monastery with an early Christian church building ( Panagia ), 6th century. An Armenian diocese and monastery existed until the 1st World War.