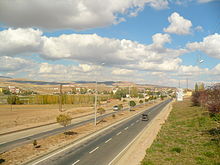 Pınarbaşı is a city and a district in the Turkish province of Kayseri . Since a regional reform in 2014, the municipality ( Belediye ) is congruent with the district (İlçe). All previous villages ( Köy ) are now districts ( Mahalle ) of the municipality. The city is located about 40 kilometers east of the provincial capital Kayseri .

Pınarbaşı is the largest district in the province in terms of area and lies in its east. It is bordered by Sarız to the southeast, Tomarza to the southwest, Bünyan to the west, Akkışla to the northwest, and Sivas Province to the north and east . The D-300 road runs through the district from west to east, and leads from Izmir in the west via Kayseri to Van . In the city, the D-815 branches off to the south, which continues via Sarız as D-825 and later D-835 to Gaziantep . In the southeast of the district is the northern slope of the Tahtalı Dağları Mountains , in the northwest of the Aygörmez Dağı with 2233 meters and the Hınzır Dağı with 2461 meters. The Zamantı Irmağı flows through the city and merges with the Göksu to the Seyhan to the south and flows into the Mediterranean Sea. It is dammed up west of the district town to Bahçelik Barajı .

At the village Melikgazi, about 15 kilometers west of Pınarbaşı are the same Byzantine - Seljuk Castle (also Zamantı River Kalesi ) and a mausoleum (Melikgazi Türbesi) . At the village of Karakuyu in the northeast of the district, the remains of a Hittite dam with an inscription of the great king Tudhalija IV can be seen.