The zone time UTC ± 0 notes that there is no time difference to the coordinated universal time UTC. The reference meridian is the prime meridian , the semicircle of length is 0 °. On watches with this zone time, it is one hour earlier than CET and the same time as GMT , GMT & UTC. 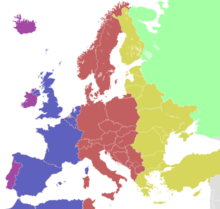 Hypothetical time zones in Europe if the principle that a country uses the time zone in which most of the country is located were consistently applied. Legend as in the map below. Portugal and Ireland could even use the Azorean time. The Kaliningrad Oblast was considered separately and added to the CET

The following countries in West Africa use GMT: