The title of this article is ambiguous. For the asteroid, see (10313) Vanessa-Mae .

Vanessa-Mae is the child of a Thai father and a Chinese mother. She was adopted by her stepfather, British Graham Nicholson, after her parents separated . In 1982 she moved to London and received in addition to their Thai nor the British citizenship .

Vanessa-Mae began playing the piano at the age of three and the violin at the age of five . At the age of eight she took violin lessons in China for six months. In 1988, when she was ten, she played with the London Philharmonic Orchestra . A year later she was accepted into the Royal College of Music in London. In Germany she first gained fame through her 1995 album The Violin Player , which includes the piece Toccata and Fugue in D minor BWV 565 . On June 30, 1997, she was the only foreign artist allowed to perform at the Unification Ceremony of Hong Kong and the People's Republic of China . She plays both classical (among others, by Giovanni Battista Guadagnini ) and on electric violins , such as on the Download - Instrumental album Xpectation (2003) by Prince ; at that time she worked as a guest musician with the US singer. 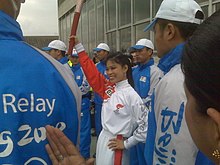 Vanessa-Mae at the Olympic Torch Relay in London (2008)

Vanessa-Mae started skiing when she was four. In 2006 she was in Zermatt for the first time . In the following years she regularly visited the Swiss mountain village in summer. She has had her first residence there since September 2009. In Zermatt, she pursued her goal of qualifying for the 2014 Winter Olympics in slalom and giant slalom for Thailand , her father's home country. Countries that do not have a driver in the top 500 of the ranking are allowed to send one representative per gender according to the regulations, provided the runner achieves the required 140 FIS points in the relevant discipline .

In January 2014 it was announced that Vanessa-Mae was successful with her project. In alpine skiing she was the first Thai woman to take part in the Winter Olympics. She qualified for the slalom and the giant slalom. She competed under the name of her father Vanakorn , but only started in the giant slalom . She finished in 67th place, around 50 seconds behind Olympic champion Tina Maze . She was the last of the placed starters.

In November 2014 Vanessa-Mae was banned from the International Ski Federation (FIS) for four years. The FIS saw it as proven that the races in which they won the FIS points necessary for Olympic qualification were manipulated in their favor. The International Sports Court did not follow up on these allegations and lifted the ban in June 2015. The FIS paid a large amount for the damage to its reputation, which it donated.

In October 2011, Vanessa-Mae's appearance at the birthday party of Chechen President Ramzan Kadyrov - who is accused of serious human rights violations - led to criticism from the human rights organization Human Rights Watch, among others .