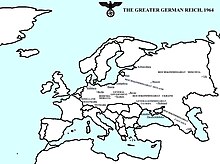 Europe 1964 in the world of fatherland

Fatherland (original title: Fatherland ) is the 1992 debut novel by the English writer Robert Harris . Harris combines the genres of the thriller or the detective novel and the alternative world story with one another by depicting a criminal case against the backdrop of a fictional Third Reich that won the Second World War and now dominates Europe.

The author claims that world history took a different course from 1942 onwards: The alternative world history in the form of a detective novel takes place in a fictional Germany from 1964 that won the Second World War . Europe is ruled by the National Socialists , including Great Britain and European Russia . The rest of the Soviet Union is still in a partisan war with the German Reich .

The USA supports Russia with aid deliveries and is in the " Cold War " with Germany. By the American atom bomb and the German "V-3" - intercontinental ballistic missiles emerged a nuclear stalemate between the two powers. However, relaxation is in sight: US President Joseph P. Kennedy , who is aiming for his re-election in the fall, is expected on his first state visit. The reason for the announcement is the upcoming 75th birthday of Adolf Hitler on April 20th. The technical status of the two great powers corresponds to that of 1964, so Germany also has aircraft carriers and nuclear submarines, and they are racing into space. The Berlin of this alternative timeline is, however, a metropolis of 10 million people, in which numerous monumental buildings planned by Albert Speer in the style of the world capital Germania have actually been realized. a. the all-dominating Great Hall .

Original document from the Wannsee Conference. In the book reference to the victims' connection.

The focus of the plot of the book is the Kripo -Sturmbannführer Xaver März, who works as a murder investigator in Berlin. He was charged with investigating the murder of the State Secretary in the General Government of Poland , Josef Bühler , but was withdrawn from the case a short time later by Gestapo investigators under the direction of Odilo Globocnik . When he went on investigating, he discovered that the murder was connected to a 22-year-old secret that reached up to the top ranks of the National Socialist leadership. In a series of accidents and murders, numerous former high-ranking party officials, including Wilhelm Stuckart , Friedrich Kritzinger and Bühler, are killed one after the other . A box of chocolates from Zurich was delivered to the victims the week of Bühler's death. Through research, März comes across a safe deposit box in a Zurich bank that was opened during the war years, but only contains the painting Lady with an Ermine by Leonardo da Vinci , which was lost during the war , and provides no further information about the case. The logs show that the locker had been opened days earlier by co-conspirator Martin Luther .

The commonality of the victims confirms that they all took part in the Wannsee Conference, which was still unknown to the alternative public in 1964 , so März tries to contact the only remaining functionary, Martin Luther, who is on the run from the Gestapo. The meeting is arranged by the American journalist Charlotte "Charlie" Maguire, but fails when Luther is shot in front of everyone.

March finally succeeds in uncovering details of the Holocaust , which has always been denied, using a suitcase with documents that Luther had brought back from Zurich and deposited at the airport . The extermination of European Jews could now be proven if March succeeded in taking the incriminating material he found, documents about the Wannsee Conference and the Final Solution , out of the country - to Switzerland , the only country in Central Europe that is not a satellite state of the German Is rich.

This is the job of March's lover Charlie. He himself lures the persecutors of the SS in a different direction and is placed on the land of the former Auschwitz concentration camp , where under the seemingly untouched landscape only old stones show that the genocide was a reality, for 11 million Jews in this alternative reality have fallen victim.

For the German translation, the protagonist Xavier March was renamed Xaver March (withdrawn in the latest edition). While some of the characters appearing in the book are fictional people, most of the National Socialist officials actually lived. B. Josef Bühler , Wilhelm Stuckart , Martin Luther , Odilo Globocnik (incorrectly spelled Globocznik in the German edition ) and Arthur Nebe .

Fatherland was Harris' first novel. He had previously worked as a journalist and political commentator and authored several non-fiction books. In this position he had already dealt with Nazi issues as a journalist and with Selling Hitler: Story of the Hitler Diaries (1986) he had written a standard work on the scandal of the forged Hitler diaries . Towards the end of the 1980s, Harris researched Albert Speer and his architectural work and decided not to publish his research in the form of another non-fiction book, but instead to use it as the backdrop for a detective novel.

The original edition was published in early May 1992 by Hutchinson, London and immediately climbed the bestseller lists in the UK. Publication rights in the United States were offered for $ 1.8 million, a record for a debut at the time. There, too, the book was at the top of the bestseller lists in June of the same year and subsequently developed into an international bestseller translated into over 24 languages, of which over 5 million copies were sold worldwide (as of 2011). With a few exceptions, such as a review in Publisher Weekly, the book was largely received positively by international critics. Many critics and academics saw it not only as an exciting thriller, but also as a serious examination of aspects of National Socialism.

In Germany, however, the reaction to Harris' book was initially very negative. The novel was viewed by German critics as "anti-German" and the use of the Holocaust theme was perceived as "frivolous". Der Spiegel even saw a "demonization of the Federal Republic". Although it was already a bestseller in the English-speaking world, 25 German publishers rejected its publication, so that the German translation by Hanswilhelm Haefs finally appeared in the Swiss Haffmans Verlag in September 1992. Later, however, the negative reception in Germany was to be put into perspective. With Heyne Verlag , a German publisher brought the novel onto the market in 1994 as a paperback, and later reviews were much more positive.

In 1994, English-language editions of Vaterland were confiscated by the Hamburg public prosecutor's office in Hamburg because of a swastika that was on the cover of the book.

HBO produced a television film of the same name based on the novel in 1994 . Directed by Christopher Menaul and Rutger Hauer took on the role of Xaver March. However, the content of the film differs somewhat from the novel and has a different ending. Nor is his description of the historical aspects of the National Socialist setting as accurate as in the novel.

The BBC produced a radio play series based on the novel with Anton Lesser and Angeline Ball in the leading roles. It was first broadcast on July 9, 1997.

Frank Castorf and Stefanie Carp dramatized the material together for the theater and performed it in the spring of 2000 at the Volksbühne in Berlin and in the Hamburg Schauspielhaus .

“In the German-speaking world, the question of the historically different, alternative, is not only prohibited, it is downright frowned upon. Why is that? The 'general question' about an alternative course of history is completely taboo in Germany because it focuses on a very special question that overshadows all others, precisely the one that the British Robert Harris tries to answer in his novel 'Vaterland': What what if the Germans had won the war? The much-touted 'inability to mourn' refers to the loss of the war and not to the Holocaust . Therefore one should not ask about the won war - countless dreams of fame and luck are banished into the realm of the split off shadow ... Because the past has only passed when it is mourned and considered - and by that I do not mean 'analyzed' and 'processed' . Analyzing and processing are terms used in industry; you do that with garbage and not with the movements of the heart. "

"Atmospheric and rapid - Fatherland is an above-average thriller"

"[...] Of course, a crime thriller with this topic is tricky. But Harris offers no Nazi nostalgia, and after reading it again and again with enthusiasm, we consider the accusation of hostility towards Germany to be absurd. The Brit simply wrote a gripping thriller with a really unusual setting. What we especially liked is the ghostly portrayal of everyday life in post-war victorious Germany and the oppressive atmosphere of Berlin [...] A dark vision. Oppressive, unsettling. It's a fine line, Nazi Germany as the backdrop for a suspense novel - but Robert Harris is dreamy about it and doesn't crash on a line. "

“[…] Harris is drafting a plausible version of the Third Reich in its 32nd year. [...] Fatherland is a formidable thriller. The fact that he was well armed from the word processing of an author whose books were previously only journalistic exercises makes him all the more remarkable. "

“Even the design of the most extraordinary political crime novel of the season is a provocation: in outline the quadriga on the Brandenburg Gate, above it in screaming red the swastika flag and the blue European flag with the star wreath [...] You shouldn't tell the content of crime stories. Just this much: Harris knows how to write well and excitingly; his role models are Ian Fleming ("James Bond") and the espionage expert John LeCarre . Everything happens that readers expect: crime, conspiracies, cover-up, deception, violence and love. But Harris cannot deny the historian - so he spices his story with historical documents of Nazi crimes. In drawing the lesson from the collapse of the Soviet empire, he wants to show that a victorious Nazi empire would one day have collapsed. [...] He insinuates that Chancellor Kohl has completed the economic rule over Europe aimed at by the Nazis. Isn't the author even aware that his thriller is also imposing the stigma of mass murder on the younger generations in Germany? At least no German publisher has given up on such frivolous bad taste. "

“Harris […] creates little tension in this narrative, apart from the unusual historical setting. The characters are flat and the plot is largely predictable. In addition, the reader may find it bad taste that the Holocaust serves as the starting point for an insubstantial, not very original thriller. "

“Fatherland is being compared to Martin Cruz Smith's Gorky Park , set in the Soviet Union, another well-made thriller about a police officer operating within a vicious bureaucracy. But Harris's narrative is more troubling as it erodes what was believed to be the past and shows that our present is by no means inevitable. Its gloomy, brown-black backdrop of a victorious Nazi regime is credible and questionable, the stuff of long sleepless nights. "

Nonfiction
A higher form of killing. The secret history of bi and chemical weapons (1982) | Sell ​​Hitler. The History of the Hitler Diaries (1985)

Not translated into German:
Gotcha! The Government, the Media and the Falklands Crisis (1983) | The Making of Neil Kinnock (1984)