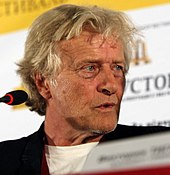 Rutger Hauer grew up in Amsterdam as the son of the acting teachers Arend and Teunke Hauer. He left home at the age of 15 and spent a year cleaning the decks of ships. Back home, he worked as an electrician and carpenter for three years while taking acting classes in an evening school. He joined an acting company where he stayed for five years until he got the lead role in the hit television series Floris .

The director Paul Verhoeven gave Hauer the lead role in 1973 in the film Turkish Fruits , which was also a success outside the Netherlands. He received his first English-language role in 1975 in the British thriller The Wilby Conspiracy at the side of Michael Caine and Sidney Poitier . After further films in the Netherlands, three of them again directed by Paul Verhoeven, Hauer made his American debut in 1981 in the Stallone film Nachtfalken . This film and the Blade Runner , which came out the following year, made him known internationally. His portrayal of the artificial human being Roy Batty in Blade Runner has received numerous acclaim and is considered one of his best roles.

After the cinematic failure of Eureka , Hauer also starred in the critically acclaimed film Der Tag des Falken . With Verhoeven he worked again in Flesh and Blood . In the cult film Hitcher, the Highway Killer , which is widely regarded as one of the best representatives of the psychological thriller, he played a serial killer. Hauer also played German roles in some films about National Socialism .

In 1988 he was for his role in Escape from Sobibor (Escape from Sobibor) with a Golden Globe Award in the category Best Performance by an Actor in a Supporting Role in a Series, Mini-Series or Motion Picture Made for TV excellent.

Commercials for the Guinness beer brand with tusks were popular in the early 1990s. After having worked primarily in British and US television productions in the 1990s, Hauer made a cinema comeback in the early 2000s with roles in Confessions - Confessions of a Dangerous Mind , Sin City and Batman Begins , for which he was again recognized received from critics. His work includes more than 150 film and television productions.

Hauer was also active as a voice actor. In the cyberpunk psychological horror video game Observer , published in 2017, he lent the protagonist Daniel Lazarski both his voice and his appearance. In the video game Kingdom Hearts III released in early 2019, he dubbed the antagonist Master Xehanort.

Hauer was married for the second time and had a daughter from the first marriage. He was committed to environmental protection , for example for Greenpeace and Sea Shepherd Global , and founded a foundation for research into AIDS .

On July 19, 2019, Hauer died in Beetsterzwaag after a brief serious illness.