The Admiral - Fight for Europe

The Admiral - battle for Europe is a 2015 published historical Dutch film about the 17th century living Admiral Michiel de Ruyter . It was directed by Roel Reiné , with Frank Lammers in the lead role .

In the Golden Age , the Netherlands was very wealthy and a great power at sea. After the death of Admiral Maarten Tromp , Michiel de Ruyter is appointed as his successor. De Ruyter achieved great success as admiral of the navy of the Republic of the Seven United Provinces and managed to defeat the British with his flagship De Zeven Provinciën . In the republic, however, an internal power struggle has broken out between republicans , with council pensioner Johan de Witt as leader and the orangists , who reintroduce governorship and Prince Wilhelm III. want to sit on the throne. When De Witt was murdered in 1672 and Wilhelm III. is installed as governor of the Netherlands, De Ruyter is sent on an impossible mission. He dies in 1676 during the naval battle near Augusta .

Recordings on the Markermeer in July 2014 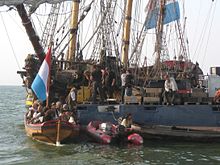 In the middle with a hat director Roel Reiné

The film was financed by the province of Zeeland , the Koninklijke Marine and the broadcasting company AVROTROS , among others . He also received around 900,000 euros in subsidies . With a budget of around 8 million euros, The Admiral - Battle for Europe was the fourth most expensive Dutch film at its premiere (see below).

Originally Yorick van Wageningen was supposed to play the main role, but there was no agreement with the producers.

Although De Ruyter never went on it, a replica of the VOC ship Batavia was used for the filming . Other locations were found in the province of Zeeland, including a. Oude Haven in Zierikzee , Het Markiezenhof in Bergen op Zoom , The Hague , Amsterdam and at the Batavia shipyard in Lelystad , the berth of the Batavia . With the exception of the Batavia , exterior photos were taken with reconstructions of the Etoile du Roy , the Shtandart and the Statenjacht Utrecht on the Markermeer .

On January 25, 2015, the world premiere took place in the courtyard of the Amsterdam Maritime Museum , to which the most important actors had traveled. During this film premiere there were various demonstrative actions: While opponents of the film criticized the glorification of the colonial power of the Netherlands and the portrayal of de Ruyter as a hero, although in their opinion he was an icon of the slave trade, there was also a counter-demonstration in the form of former Dutch marines (Mariniers ), for whom de Ruyter is a heroic figure in Dutch history.

The German synchronous processing was done by the Stutt i / O Synchron in Stuttgart. The dialogue book was written by Simon Mora , who also directed the dubbing and can be heard as a narrator.