The northeast side of the Veste Oberhaus with the pilgrimage church of St. Salvator at the bottom left

The Veste Oberhaus with the Veste Niederhaus and the pilgrimage church of St. Salvator in the foreground 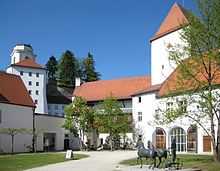 Inner courtyard of the Veste Oberhaus

View to the tower

" Paragon " - Anabaptist hymnal, emerged in the dungeon of the fortress

Veste Oberhaus is a castle on the left side of the Danube , opposite the old town of Passau on the right . Founded in 1219, it was for most of the time the castle and residence of the princely bishop of Passau's bishopric . The highly visible inscription 1499 on the facade shows only one of the years of construction of the castle, which was expanded again and again until 1800.

The construction of the Veste Oberhaus on the Georgsberg above Passau dates back to 1219. It was built by the first Passau prince-bishop Ulrich II. Around an existing George chapel. The castle complex should be an expression of military strength and at the same time support for the imperial dignity of the Passau bishops obtained in 1217. Furthermore, it should serve as protection against external and internal enemies, including against Passau citizens who wanted to build an imperial city .

Due to the advancing siege technology, the fortress has been constantly expanded and expanded over the centuries, making it possible to study the art of fortification from the 13th to the 19th century. The most important renovations took place under the prince-bishops Leonhard von Layming , Christoph von Schachner , Wiguleus Fröschl von Marzoll , Urban von Trennbach and Johann Philipp von Lamberg . They built the fortress from a Gothic fortress , to a prince's seat in the early Renaissance, to a “permanent high castle” and finally, in times of the Turkish threat, to a representative national fortress.

The fortress Oberhaus experienced five sieges between 1250 and 1482, all of which were unsuccessful. Twice, in 1298 and 1367, it was the citizens of Passau who tried to rise up against the bishop.

Between 1535 and 1540 numerous supporters of the Reformation Anabaptist movement were imprisoned in the dungeon of the fortress because of their beliefs. During their imprisonment, the Ausbund was created , a hymn book that is still used in Amish services today. Some of the songwriters died while imprisoned, and many were martyred after their stay in prison .

With the secularization of 1802 the bishop lost the property. Napoleon I used the fortress in his campaign against Austria . It was made available to the ally Bavaria as a border fortress against Austria. In 1805 the fortress surrendered to the Austrian army. After the Congress of Vienna , it was used by the Bavarian army for almost a century both as a fortress and from 1822 as a state prison for political prisoners and as a military penal institution. Until 1918, the Oberhaus fortress was the dreaded "Bastille of Bavaria".

The city of Passau came into possession of the facility in 1932 and set up the Upper House Museum .

The Upper House Museum includes the city museum, a picture gallery and other collections with a focus on Eastern Bavaria and the neighboring countries of Bohemia and Austria . The baroque apron fortification was replaced by the National Socialists in 1934 with the first thing of the Third Reich (based on a design by Ludwig Moshamer ). The castle also houses a restaurant , an observation tower in the so-called observation tower from the 18th century, an observatory and a youth hostel in the so-called general building from 1597.

The facility towers 105 meters above the valley on the St. Georgsberg between the Danube and Ilz and is protected on both sides by steep slopes. The fortress Niederhaus is located below the river and connected by a battlement . From the Ilz side a drivable road leads up to the castle.

From the Schanzl Bridge over the Danube, the castle can be reached on foot via the Oberhausleiten staircase . The Ravelintor at the entrance to the complex with the coat of arms of Cardinal Johann Philipp von Lamberg dates from 1703. Behind it is the baroque crown work , a rampart zone laid out between 1674 and 1740. The second defense zone behind it mainly dates from the 16th century. From the middle ring of the fortifications, Burgstrasse leads past the main guard over the bridge into the main castle proper . The gate tower at the entrance shows the coat of arms of Prince-Bishop Leonhard von Laiming from 1440. The buildings around the outer courtyard date from the 16th century. In the inner courtyard is the castle church of St. Georg with early and high Gothic frescoes ; it is even older than the castle itself. In the Schachner building from 1500, on which the widely visible coat of arms and year fresco from 1499 is attached, is the representative knight's hall on the upper floor , which is accessible through an open arcade with Dürnitz - and Princely wing from the 14th to 17th centuries is connected. There are gun batteries on the lower floor of the Schachner building.

The so-called Batterie Linde , a terrace of the Veste Oberhaus surrounded by defensive walls , offers a good vantage point of the three-river corner between Inn, Danube and Ilz: from here the different colors of the three rivers can be clearly seen.