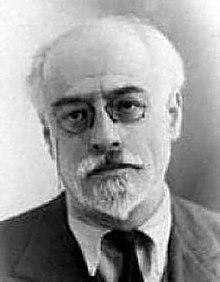 He was born the son of a couple doctors and studied in St. Petersburg Law . From 1901 he was active in the Russian labor movement and in 1905 he joined the Social Revolutionary Party . Shortly afterwards he was sentenced to exile in Siberia for his political activities , but was able to flee to Paris in 1907. In Paris he made the acquaintance of well-known anarchists. The French authorities sentenced him to imprisonment in an internment camp in 1915. Volin was able to flee again, this time to the USA .

In New York he worked for the Russian-language newspaper Golos Truda (Voice of Work). He joined the "Union of Russian Workers in the United States and Canada ". This had around 10,000 members around 1915.

In July 1917, Volin returned to Russia. He took over the leadership of the " anarcho-syndicalist propaganda union" first in St. Petersburg, later in Moscow . In Moscow he had published a daily newspaper since October 1917, which was again called Golos Truda . The newspaper became the main mouthpiece of the anarchists in revolutionary Russia.

At the end of 1918, Volin and others formed the Anarchist Federation of Ukraine . In 1919 he joined the peasant army of Nestor Machnos near Odessa . After the Machno movement fought against the White Army loyal to the Tsar in 1919 , it was attacked by the Red Army in mid-January 1920 . Volin was also arrested and had been detained in Moscow since March. Trotsky threatened him with execution.

In mid-October, when the situation for the Red Army worsened, an agreement was reached between the Bolshevik government and Machno. In the course of this agreement, Volin was also pardoned. The freedom should not last long, however. After the White Army was defeated with the help of the Machno movement, the Red Army broke the agreement in November 1920. The commanders of the Machno movement were invited to a conference where they were arrested and shot dead. Anarchists and anarcho-syndicalists have also been arrested in other parts of the country.

Volin on his bed at the end of his life

The terror against the anarchist movement reached its peak after the Kronstadt uprising . In the summer of 1921 the Trade Union International met in Moscow with the participation of numerous representatives of the foreign anarchist movements. At the same time, numerous Russian anarchists were arrested. Those arrested went on hunger strike to protest . Volin was among them. Out of consideration for Congress, the anarchists were released and expelled from Russia. Volin first went to Berlin , where he worked for FAUD . He later moved to Paris at the invitation of Sébastien Faures . At times he also lived in Nîmes and Marseille . In France during the Second World War, he was part of a small group of international anarchists in the Resistance against the German occupiers. On September 18, 1945 Volin died in Paris of tuberculosis . Two years after his death in 1947, his three-volume main work La Revolution inconnue was published in 3 volumes in German: The unknown revolution .

In it, Volin presents the pre- and post-history of the Russian Revolution from an anarchist point of view and describes in particular the role of the anarchists, the Machno movement and the Kronstadt uprising .

His brother Boris Eichenbaum was a well-known Russian literary scholar.