Wolfgang Johann Haney (born on January 9, 1924 in Berlin ; died on October 13, 2017 there ) was a German survivor and contemporary witness of the Holocaust , numismatist , collector of anti-Jewish and anti-Semitic propaganda and objects relating to the National Socialist system of ghettos and concentration camps .

Wolfgang Haney was born in 1924 to an assimilated Jew and a Catholic father. The father ran a music school in Berlin-Pankow . Wolfgang and his brother were brought up Catholic, but according to the Nuremberg Laws, from 1935 onwards they were considered to be first-degree Jewish mixed race . Since Wolfgang Haney was not allowed to do the Abitur as a “ half-Jew ” , he completed an apprenticeship as a bricklayer from 1938 . From 1941 he was able to study at a Berlin building trade school after passing a special examination for the gifted .

The boycott of Jews deprived Haney's grandparents of their economic livelihood, and both died before the start of the Second World War . Wolfgang's father also had to close his music school because of his marriage to a Jewish woman. Shortly before the end of the war, Wolfgang Haney, who as a “unworthy of defense” half-Jew did not become a soldier, was expelled from school and served in a labor brigade. His father had to defuse bombs in a punitive battalion because he did not want to get a divorce. Haney's mother initially worked in the workshop for the blind by Otto Weidt , the many Jews saved the life. She barely escaped a search of the workshop by the Gestapo . Haney's mother spent the last months of the war hiding in a forest near Rehfelde , about 30 kilometers east of Berlin, first in a hole in the ground and later in a hut built by Haney. Her brother was murdered in Auschwitz.

After the end of World War II, Haney initially planned to emigrate to Israel . Although he already had the entry papers, he finally refrained from doing so, as he shied away from emigrating to a country with a foreign language and did not feel like a Jew. During the war Haney had moved to the Eichkamp settlement , where he lived until shortly before his death. Haney completed his studies in Berlin and was involved in the reconstruction of the city as an engineer. First he was head of the civil engineering department, then city ​​councilor for construction and housing in the Charlottenburg district . He later became head of department at BEWAG . Together with his wife, also a survivor of the Holocaust with Jewish roots, he visited schools to tell young people about the fate of their families as contemporary witnesses . Haney's lectures and exhibitions took him across Europe and overseas.

Collection of anti-Jewish propaganda and evidence of everyday Nazi culture

Anti-Semitic mockery postcard, around 1905: Little Cohn at the muster 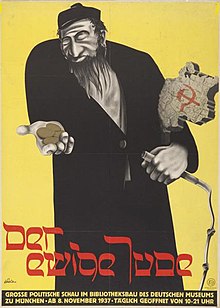 Poster for the exhibition The Eternal Jew , 1937

Haney had already collected coins and other objects as a child, and his collections fell victim to the war. In the following decades he worked as a coin collector in his free time , he was a member of the Numismatic Society in Berlin and chairman of the Berlin Coin Friends for thirty years.

Only after his retirement in 1991 did Wolfgang Haney turn to collecting Judaica , in particular evidence of anti-Semitism, the persecution of Jews and the Nazi ghettos and concentration camps. Haney came across concentration camp money from the Oranienburg concentration camp by chance and, as a coin collector, was “fascinated that something like this existed”. Haney devoted himself intensively to researching these contemporary documents and was able to help prove the economic exploitation of Jewish forced laborers in compensation proceedings. Since concentration camp money is not a particularly extensive collection area, Haney soon expanded the subject of his collection.

Initially, Haney's collecting activity was made easier by the fact that the militaria dealers who dominate the market and their customers were interested in military history and memorabilia from senior Nazi officials. Documents relating to the persecution of the Jews were considered worthless and could be obtained cheaply. Over almost three decades, Haney built up two collections of objects and documents from concentration camps and ghettos and anti-Semitic postcards, comprising more than 12,000 objects . The collection of objects from the camps includes, for example, food cards with the notation “for Jews”, Jewish stars in almost all known designs (such as the Belgian Jewish star labeled in two languages ​​with “Jood” and “Juif”) and photographs from ghettos and concentration camps. Haney was co-editor of a book published in 2014 on the food supply for Jews during World War II.

When it came to postcards, Haney initially only collected German cards because, as a victim of National Socialist persecution, he wanted to avoid giving Germans the opportunity to apologize by referring to anti-Semitism in other countries. He later abandoned this restriction so that his collection also offered a representative cross-section of the production of anti-Jewish postcards in other countries such as Poland, Russia, France, Great Britain and the United States.

Haney consciously did not collect for himself alone, but equipped more than 70 exhibitions on contemporary history with objects from his collections. Outstanding was the 1999 from the Jewish Museum Frankfurt a. M. and the Museum für Kommunikation Frankfurt developed a temporary exhibition Abgestempelt - anti-Jewish postcards , which were mainly based on material from Haney and were shown in their original form in several locations until 2004. In a revised and compressed form, it has since been awarded as a traveling exhibition by the Federal Agency for Civic Education . In 2005, the memorial for the freedom movements in German history developed a bilingual German-Polish touring exhibition with the title “... and we stopped being human.” The way to Auschwitz as reflected in the Wolfgang Haney Collection . With 500 exhibits from the Haney collection, including letters, banknotes, concentration camp clothing, outbreak and death reports, but also a brothel card and a self-made lighter, everyday camp life in Auschwitz was illustrated. The exhibition was first shown in the Museum of European Cultures and then in several German and Polish cities.

Grave of Wolfgang Haney in the Heerstrasse cemetery in Berlin-Westend

Wolfgang Haney died on October 13, 2017 after a short illness at the age of 93 in Berlin. The burial took place on October 27, 2017 at the state-owned cemetery in Heerstraße in Berlin-Westend . The final resting place of Wolfgang Haney (grave location: 12-C-6) is near the grave of his wife Marie-Luise Haney (1917–2007).

The city of Ludwigsburg had already expressed interest in taking over his collection during Haney's lifetime . The whereabouts of the Haney collection is initially unclear.