Wollbach is a district of Kandern in southwest Germany , at the foot of the Black Forest in Baden-Württemberg .

The district is located at the meeting point of Wollbachtal and Kandertal in the Markgräflerland , between the Upper Rhine Plain and the southern Black Forest . The core town extends into the Wollbachtal and is traversed by the Wollbach brook. This also determines the geographical division in the northern upper and southern lower villages.

To the south, following the federal road (Kandertal route) and the Kandertal, is Wittlingen , and to the north is the suburb of Hammerstein and then the town of Kandern . To the west is the village of Maugenhard. In the east is Nebenau, in the northeast Egisholz. Located at the Gemarkungsgrenze wool Bach east part places Hauingen which to Loerrach heard and to stones belonging suburb Hägelberg .

Like the entire Markgräflerland region, Wollbach has an extremely mild climate. Mediterranean air flows in via the Burgundian Gate , from the Rhone Valley , which ensures an above-average amount of sunshine. Due to the ramified valley location, the place also remains protected from the industrial pollution from the greater Lörrach , Weil am Rhein and Basel area .

The first written mention of the place took place in 767.

On March 1, 1974, Wollbach was incorporated into the city of Kandern. 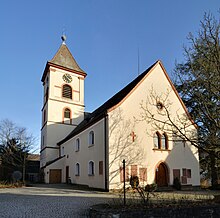 The vast majority of the population professes the Protestant denomination. In the Protestant church in Wollbach there is a service every Sunday followed by a children's service. The Catholic faithful attend mass in Kandern.

The "Strübli" festival is organized by the Wollbacher Gesangverein every two years, with an even year. The rare Baden specialty “ Strübli ”, after which the festival is named, is served here for two days . The original festival area in the steeply sloping Postgasse required some “Viertele-Stibber”, wooden wedges that can be purchased for a donation to the choral society in order to be able to put the glass down. The festival has been celebrated in the school and hall area since 1998. The "Stibber" is still a cult object. The music association always organizes its annual concert at the beginning of the year and a church concert or a “march music festival” every year. Also to be mentioned here is the autumn festival, at which there is "onion waie" and new wine.

In the former farming village there are now only a few full-time farms and forestry businesses, but there are still a number of part-time businesses. Most of the economically active population working abroad Wollbacher in Raumschaft Loerrach and Weil am Rhein, but also in the Basel (Switzerland).

There are two SWEG bus stops on the federal road (Kandertal route) and connect Wollbach to the north with the city of Kandern and to the south with Lörrach and Weil am Rhein and Basel. Opposite the bus stops is the train station of the historic Kandertal Railway.

City and districts of the city of Kandern