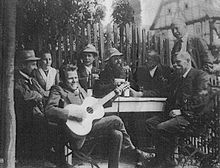 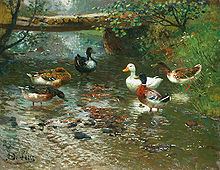 Adolf Lins: Ducks by the stream

Adolf Lins , called the Gänselins (born October 21, 1856 in Kassel , † March 26, 1927 in Düsseldorf ), was a German painter . He is assigned to the Düsseldorf School of Painting and belonged to the Willingshausen painters' colony .

Adolf Lins was born on October 21, 1856 as the third of four children of the married couple Rudolph Lins (1822–1870), post office clerk, and Bertha, née Kürschner (1823–1890), in Kassel. When the father rose from post office assistant to senior post office secretary, the family moved the apartment to the outskirts of town due to the improved financial situation. But with the death of the father, Adolf is thirteen, the family experiences a social decline, which is documented by the renewed change of residence, now in the Castenalsgasse in the old town of Kassel. The mother is committed to a good education for all children. The son Adolf attended the humanistic-oriented Friedrichs-Gymnasium from 1866 and left it in 1872 with the Obersekunda-Reife. His siblings also pursue an upscale life, the older brother Carl works as an architect and drawing teacher, the younger brother Theophil is promoted to factory director and Adolf's sister, Auguste Lins, who is four years older, heads the technical school of the municipal household and trade association. She remains unmarried.

His first stay in the painter's village of Willingshausen in the Schwalm, in 1874 (and then every year until 1908), resulted from the recommendation of his Kassel academy teachers to intensify his painting style with practical studies on site. In the village he is able to win the affection of the children with direct and open interaction, who become the motifs of his pictures. On subsequent visits there, the message immediately spreads among the young villagers: "Lins is up". With the adults too, he quickly creates a special image for himself due to his spontaneous appearance and his painting activity with the easel in the open air in front of the Haase Gasthof, the actual painter's home. The friendship with the Düsseldorf painters Hermann Sondermann and Nikolaus Barthelmess motivated him to also move to Düsseldorf in 1877.

In 1915 Lins met Gertrud Klein, who became his housekeeper; However, it was only four years before his death, in 1923, that the painter legitimized living with her with a marriage contract. In 1926 he suffered a stroke and fell ill with diabetes. One eye must be surgically removed. Lins died on February 26, 1927 and was buried in the Düsseldorf Nordfriedhof , his wife continued to live in the studio building on Sittarder Straße.

Establishment of a new artist group in Röllshausen

From 1908 Lins (53 years old) and Hugo Mühlig (56 years old) lived and worked in Röllshausen, a neighboring town of Willingshausen, during the summer months . They are accommodated in the restaurant with a separate hall (their studio) owned by the farmer Johann Georg Siebert (1856–1930). Adolf Lins has lost nothing of his charisma. In 1910, young artists from Willingshausen followed and Röllshausen developed into an independent artist colony. The three decades younger painters such as Franz Eichhorst , Franz Martin Lünstroth (1880–1968), Walter Hoeck , Hans Bremer (1885–1959), Walter Courtois (fallen in 1914), Hans Wiegand (1890–1915) join them. They are followed by Emil Beithan (1878–1955), Karl Mons (1890–1947) and Arno Drescher (1882–1972), who eventually settle permanently in Röllshausen.

Lins and Mühlig should be classified in the new group as leaders or as father figures. A watercolor caricature by Lins, created in 1911, reflects the prevailing mood and order of the group of painters. Everyone seems satisfied and hooks one another. In order to emphasize their togetherness and equality, Lins places the painters on a line according to size. He himself, on the right side, with a pipe in his mouth, wants to direct his group of artists to a "non-commissioned officer". The title of the picture: “We stop being compatriot Linzerische Buabe,”… refers to their “group song”, which is intended to emphasize the common spirit of the alliance. Mühlig, with a cigar in his mouth, a beer glass in the right and a newspaper in the left occupies the center of the picture and is singled out by Linz as an intellectual father figure.

Lins also spends time studying outdoors in the Lower Rhine, including in Nierst, where he occasionally spends a few summer months. In 1880 he went to study in Lipperland to Schwalenberg and Paris ; In 1882 he made a trip to Kohlstädt near Bad Lippspringe , to Detmold and finally to Tyrol . Works that were created around 1885/90 document the artist's stay in the Dachau painters' colony near Munich.

Since 1877, Lins exhibited his works, rural children's scenes, but mostly village views and landscapes from the Schwalm, the Lower Rhine and Westphalia, and later also from Upper Bavaria, often with staffage figures, in leading Düsseldorf art dealers and in the annual exhibitions of the Kunstverein für die Rheinlande and Westphalia , the Free Association, the Berlin Academy as well as Dresden, Munich and Vienna. Since the 1880s he has preferred to paint stream and pasture landscapes populated with cows and sheep, but above all with chickens, ducks and geese, which earned him the nickname "goose lins". Paintings often appeared as wood engravings in the illustrated sheets of the time. Lins also created portraits, for example those of a few painters. Since the 1890s, however, he increasingly dealt with the pure landscape, whereby his painting style was increasingly characterized by an expressive, almost violent brushstroke. In addition to numerous watercolors and gouaches, there were also some independent graphic works; Illustrations for festivals in the “Malkasten” are kept in its archive.

This article or section needs revision: what exactly is this list supposed to represent? There is no indication of “what” is reproduced there or “on which pages” it can be found.
Please help to improve it and then remove this marking.

Representations by another hand

This article or section needs to be revised: fill in incomplete information
Please help to improve it and then remove this marking.