The Boccaccio of Tirrenia

In 1990 the transport ship burned down in the port of Marseille and was then sold to Egypt.

The ship was converted into a ferry in 1991 , renovated and given a higher superstructure. After that it had a mass of more than 11,000 tons, was 118 meters long and up to 17 knots (31.5 kilometers per hour) fast. There was space for almost 1,500 passengers on board. The car capacity was increased to 320.

In 1999 the ship was bought by El Salam Shipping in Suez , Egypt and renamed Al-Salam Boccaccio 98 . The ship was registered in Panama on the shipping company Al Salam Maritime Transport Co.

On February 2, 2006, the ferry sank in the Red Sea. The area has been a site of accidents in the past, for example the wreck of the Salem Express , which killed 500 people off the coast near Safaga . 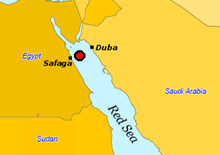 The scene of the accident in the Red Sea

On the journey from Duba , Saudi Arabia to Safaga , Egypt , the accident began shortly after leaving the port when a truck caught fire in the vehicle deck or - according to other sources - a cable fire broke out. Since carbon dioxide - fire extinguishers were not available, the team tried to extinguish with water the fire.

The ship's crew is said to have calmed the passengers down during the fire and asked them to take off their life jackets .

However, the extinguishing water that collected in the vehicle deck could not be brought outboard by scuppers or powerful bilge pumps and caused a heeling moment due to the large free surfaces in the vehicle deck . This led to a severe tilt of the ship.

Although the Egyptian sources assured that they had not picked up an emergency signal, an automatic emergency signal from the ferry was received on February 2, 2006 at 23.58 UTC at the British SAR headquarters in Falkirk, Scotland , which presumably came from an emergency beacon .

St. Catherine , who was still in port by the owner at 0.45 UTC, was only able to contact an officer in a lifeboat at 5.00 UTC. Overloaded with 1,800 passengers himself, the captain said he did not dare to turn the ship to get to the site of the accident. He was afraid of capsizing due to the strong wind.

On February 3, 2006, several survivors were found in lifeboats and bodies were recovered. According to the Egyptian Minister of Transport, four rescue ships were deployed by the military. Other ships in the vicinity of the accident site also participated in the rescue. On February 4, a Lockheed P-3 Orion  - a US Navy's maritime patrol aircraft  - spent 15 hours searching for survivors. The Bulwark , a military ship that was on patrol in the Red Sea, offered to help by Great Britain , was not requested. The ship could not have reached the site of the accident until two days later.

Of the 1,414 people, 388 survived the accident; around 400 bodies had been recovered by February 14, 2006. Desperate relatives waited in the port city of Safaga, and tumult broke out, in which on February 6 even the office of the Al Salam Maritime Transport Company in Safaga was devastated.

In an investigation ordered by the Egyptian President Mubarak , a few days after the accident, negligence, indifference and corruption were cited as the causes of the accident. The ship's black box was recovered on February 21 from a depth of 800 meters by British and French experts using a diving robot and analyzed in Great Britain . The Egyptian government blamed the captain of the Al-Salam Boccaccio 98 for the accident, since - as the evaluation has shown - he only sent a distress signal when the ship was already sinking.