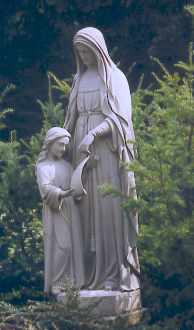 Angela Merici in the park of the fishing school Osnabrück

The Angelaschule in Osnabrück-Haste is a state-approved, co-educational , private, Christian high school in the independent sponsorship of the school foundation in the Diocese of Osnabrück .

It was founded in 1903 as a Catholic school for women and girls by sisters of the Ursuline Order, which it was in charge of until 1992. The school was one of the first women's high schools in Germany. It was named after Angela Merici , the founder of the Ursulines.

St. Angela was built in 1903 in the historicizing neo-Gothic style according to plans by the diocesan master builder Alexander Behnes as the motherhouse of the Ursulines with a cloister building , chapel, nun's garden, cemetery and park, as well as an affiliated girls' school with boarding school in the Nettetal near Haste. The mother house was inaugurated on August 15, 1903. In the same year, the existing branches of the Ursulines in Osnabrück (Ursulaschule), Hamburg (1900–1952, later the Sophie Barat School ) and Eutin (1887–1962) were subordinated to this parent company . The head of the monastery was a venerable mother who had the rank of abbess . The superiors of the branches and the superior ( prioress ) of the mother house were subordinate to her . The Ursulines of St. Angela, who were addressed as Mater (= mother), were still living in seclusion at that time , and the profession of the novices was made before the Osnabrück bishop.

In 1924/25 the monastery was expanded to include a chicken farm with a poultry house.

The monastery church, consecrated in 1904, was actually used as a parish church by the Haster Catholics until the Christ the King Church was built in 1934. It initially had a bell tuned to F, the so-called St. Ursula bell, which was consecrated on August 10, 1903. In the summer of 1926 the larger St. Angelaglocke, tuned to Es, and the large Marienglocke , tuned to C, were added. Both bells were cast in Gescher in July 1926 .

- Inscription of the St. Angelic Bell

“Honor me to praise you, oh hl. Virgin

And protect me against your enemies! "

After the new monastery was built in 1903, only a housekeeping school was set up in St. Angela in cooperation with the Ursula School. With the reform of girls' education in 1908, the St. Angela women's school received state recognition as a lyceum in 1910 with the completion of secondary school . In 1911, the Lyceum was expanded to include a one to two-year senior high school. The fishing school was a forerunner of the women's high schools in 1911 . The Ursulaschule , located in Osnabrück and administratively subordinated to the motherhouse in Haste, became a “Realgymnasiale Studienanstalt” in 1912 and was initially the only Osnabrück school where girls could take their Abitur. In order to guarantee a professional education, some nuns were sent to study at the University of Münster. In the period from 1922 to 1929 the Angelaschule also offered courses for technical teachers in housekeeping and needlework.

In 1929, the Angelaschule was one of the first German schools to open a women's secondary school, in which science and home economics were taught and internships were offered. The Werkabitur after the 13th grade entitles the holder to attend technical colleges and was put on a par with the Abitur in 1938 during the Nazi era .

On October 19, 1939, the order was given to close the school from Easter 1940. After a postponement until Easter 1941, all of the girls' classes that were still in existence were transferred to public schools after the last female primary school in St. Angela had passed their Abitur. After the convent was confiscated by the Gestapo and handed over to the Wehrmacht , the Ursula School became a medical park and St. Angela became a military hospital. Only 35 sisters were allowed to stay. After the war ended, a municipal hospital was initially set up in St. Angela. At the same time, the nuns opened a kindergarten.

From November 1945 school operations began again, from now on as a two-track high school with specification from the 11th grade in a domestic or modern language branch. One reason was that the Ursula school in Osnabrück had been bombed and found a temporary home in the Angelaschule until 1951. The Hamburg Ursuline School, which is subordinate to the St. Angela monastery, was able to resume operations at Easter 1946, but in 1952 it was transferred to the Sisters of the Sacré Cœur Order .

After the reopening of the Ursulaschule in Osnabrück, the " Angelaschule-Ursulinen " remained as a " Recognized private modern-language grammar school for girls a. Frauenoberschule ”with internal and external students. In addition to the nuns, secular, mostly female teachers also taught at the fishing school.

During the Easter break in 1962, the cloister building, the school and a large part of the boarding school burned down on the night of March 23rd to 24th. With a 14-day delay, school operations were resumed after the Easter break, initially in shift lessons in the Ursula school. Space was created for about 40 sisters and 116 internal schoolgirls in the spared parts of the building of the Angela School and some separate outbuildings. Reconstruction began just a month later, so that, from autumn 1962, an initially improvised school operation was possible again in the fishing school.

In 1978 it was transferred to episcopal sponsorship, after which most of the religious teachers were replaced. The Catholic girls' school has been converted into a coeducational Christian school that is also open to Protestant students. In 1984 the first young men graduated from the fishing school. In 1987 part of the shooting of the ZDF television film Der Krähenbaum took place in the Angelaschule . Former rower Peter van Roye was a teacher at the school. The motto of the anniversary celebration in 2003 was "Looking for life together".

afterwards the school was closed by the Nazi regime

After the fire in 1962, the fishing school was modernized and expanded several times, including the old building fabric. Due to the fact that it is embedded in the old monastery park, the school grounds are “probably unique”, according to the school.

The outdoor facilities include a park, often described as “picturesque”, with a centrally located pond, the river of the Nette, old bridges and trees and the monastery cemetery, which was consecrated on August 29, 1903. The pond was used for ice skating in the past. On June 14, 1929, the pond was drained in order to desludge it, to narrow the bank and then to fill it again. When it was drained, it was found that the pond was inhabited by mussels , carp and tench . Since 2006, the park has been redesigned from an ecological perspective. 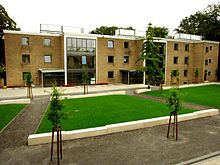 "Campus" and "class wing" of the Angelaschule

The diverse range of offers for close-to-nature lessons, breaks and free periods include, for example:

During the summer vacation 2011, the area of ​​the front school yard was redesigned so that it is now reminiscent of a campus with its lawns surrounded by trees, small walls and benches. 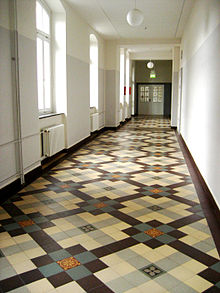 One of the corridors in the monastery wing of the Angelaschule

Today there are four different school buildings on the site:

In 2005 the Angelaschule was the first school in the Diocese of Osnabrück to receive the title of European School . In line with this reputation, the foreign language offering includes English, French and Latin as well as Spanish. All languages ​​can be chosen as examination subjects in the Abitur.

The learning of foreign languages ​​and the like is supported. a. through various exchange programs at the Angelaschule such as B.

In the qualification phase, pupils in the seminar subject Vive le français can deal with French lessons in primary school and gain practical experience.

As a free school under episcopal sponsorship, the Angelaschule has set itself the task of “educating and educating young people from a basic Christian attitude” (flyer “School Pastoral Care” from the Angelaschule).

Students looking for silence can visit the meditation room, the chapel or the historic monastery garden.

The Angelaschule's musical offerings include a.

In the wind class, students learn a new musical instrument in two years in instrument lessons. During music lessons, music is played together in the class. Many students grow into the ensembles during their time in the wind class.

For example, there were activities of wind ensembles in the past

Other working groups are :

One focus of the school is participation in various projects. The fishing school is integrated into the Comenius program and N-21 . The school also participates in the KidS project (local politics in schools), in cooperation with the Osnabrück City Council. Visiting professors from the University of Osnabrück accompany scientific teaching projects, and the students take part in community projects (GrenzDance).

Outside of Europe, the fishing school has been looking after the partner school Miramar in Peru for 25 years . This school in the district of San Miguel in Lima was founded in 1952 by German Ursulines as a school for the poor with an attached monastery in the Miramar district. Since 2013, the SV team of the Angelaschule has been organizing an annual benefit concert, some of the proceeds from which go to the school for the poor. In addition, there are proceeds from the regular summer festivals and Advent bazaars. 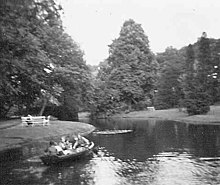 The pond in the park of the fishing school 1957

Since 2006 the park, the school yard and the buildings have been redesigned in a large-scale project according to ecological aspects, with the participation of parents, pupils and teachers' initiatives. This project was supported by the German Federal Environmental Foundation and the Fraunhofer Institute . Because of their great commitment, the school community was awarded the title Environmental School in Europe and Agenda 21 School on October 1, 2007 . In addition, the fishing school received the Eco Schools Award .

Since 2008 the fishing school has been a place of work for voluntary ecological years . One or two participants help with the implementation of the projects in line with the school's ecological profile. In addition to the sale of environmentally friendly school materials in the so-called “eco-scooter” and help with the conservation of nature in the park, environmental educational activities with the students are also possible.

From 2009 onwards, extensive renovation work was carried out on the so-called class wing (building in which most of the pupils have their classroom), which was supported by the Federal Ministry for the Environment and the German Federal Environment Foundation. The measures took particular account of the energy efficiency of heating and insulation and an ecological selection of materials. Innovative room air and light technology have been used.

In 2003 the entire school community went on a school trip to Italy on Lake Garda to visit the places where St. Angela Merici worked. Further school trips took place in September / October 2009 and 2017.

Apartments for students, pupils and trainees

Since the fishing school is no longer a boarding school, some of the old rooms (especially on the 4th floor) are no longer used by the school or nuns. The floor here is now equipped with four eat-in kitchens for a total of 35 residents (furnished rooms).

The old building is divided into building parts for school purposes (lessons, library, conferences, ...) and for living for the rest of the Ursulines, who are making more and more of their premises available to the school. For example, the “Blue Kitchen” (St. Angela's monastery kitchen) has been greatly reduced in size. The new part of the library is now located here.