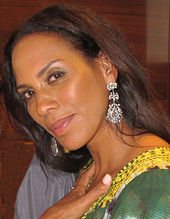 Barbara Becker née Feltus , (born November 1, 1966 in Heidelberg , Baden-Württemberg ) is a German actress and designer. She became better known as the first wife of the former tennis player Boris Becker .

Barbara Becker 2017 in Düsseldorf with Juan Lopez Salaberry at QVC

Barbara Becker is the daughter of the Afro-American photographer Harlan Ross Feltus and the German teacher Ursula Feltus. She has a sister and lived in Karlsruhe and Pforzheim for a long time . Becker completed training in singing and acting in Munich and shortly afterwards began working as a model in the fashion industry.

The former Waldorf student became known at the age of 27 through her marriage to Boris Becker on December 17, 1993. With him she had their two sons Noah (* 1994) and Elias (* 1999). After seven years of marriage, the couple separated and Barbara Becker moved with the children to Fisher Island in Florida in 2000 . The marriage was divorced on January 15, 2001. The child custody trial in a Florida court attracted particular attention as the court hearings were televised.

On September 9, 2009, Barbara Becker married the Belgian artist Arne Quinze . On November 1, 2011, the couple announced their separation. According to her own statement, she never used the name of her second husband.

Barbara Becker first worked as an actress in several television films, such as Wie du mir in 1989, in Basically I'm an Electrician in 1990, in 1991 in Heart in My Hand and in The Fifth Column.

Becker also works as a fashion, jewelry and product designer . She designed interior decoration products such as wallpaper, curtains, fabrics and carpets and launched her own jewelry collection in 2012. As a model, she advertised her own collections as well as other products.

She has also published DVDs and books on Pilates , yoga and fitness . In 2004 she was a member of the jury for the program New Life - my new life on ProSieben . In 2019 she danced with Massimo Sinató in the twelfth season of Let's Dance .

Above all, health and vitality are her themes; In 2020 her guide to better aging, The Barbara Becker Formula, was published .