The beech plants (Fagaceae) are a family in the order of the beech-like (Fagales) within the flowering plants (Magnoliopsida). The eight to twelve genera with around 670 to 900 species mostly thrive in the cold to temperate, less often in the subtropical to tropical climates, predominantly in the northern hemisphere . 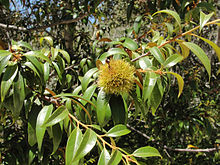 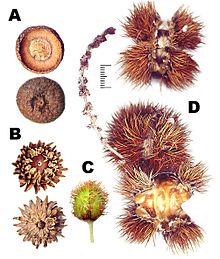 All species of the Fagaceae family are woody plants and usually grow as trees or rarely shrubs . They are evergreen or deciduous.

The alternate and two-line or spiral leaves are divided into a petiole and a leaf blade. The leaf blades are often leathery. The leaf margins are smooth, serrated or serrated. If the leaf margin is smooth, the lateral nerves do not reach the leaf margin. The leaf surfaces are covered by simple, star-shaped or branched hairs ( trichomes ). Stipules are present.

The flowers are grouped in upright or pendulous, simple inflorescences , here called kittens. All species are single sexed ( monoecious ), that is, there are female and male flowers on one plant, the flowers of one sex are grouped together in inflorescences. The unisexual flowers are radial symmetry . There are two times three free bracts or the bracts are fused and end with four to six lobes. There are four to twenty stamens in the male flowers . The female flowers contain Staminodien and usually three to six (2 to 15) carpels have become an under constant ovary grown. There are two hanging, anatropic, bitegmic ovules per ovary compartment . The pollen is mostly spread by wind, but in some species, especially of the Castanea genus, by insects.

The fruits typical for this family are nuts , up to three of them sit together individually (depending on the genus) in an axis cup, also called fruit cup or cupula. That is why the family is also known as Cupulaceae . The fruits are spread by animals. The seeds are often intensely surrounded by hairs that originate in the endocarp .

Distribution of the Fagaceae

The Fagaceae family was established in 1829 by Barthélemy Charles Joseph Dumortier in Analyze des Familles de Plantes , 11, 12. The type genus is Fagus L. A synonym for Fagaceae Dum. is Quercaceae Martinov.

The family Fagaceae is divided into two subfamilies with a total of eight or ten (previously six to seven) genera and about 670 to 1000 species:

In older literature, the false beeches or southern beeches ( Nothofagus Blume ) with around 35 species are classified in this family. In the course of the evaluation of molecular genetic data, the Nothofagus species ( APG I system and the following) were placed in a separate family of beech trees (Nothofagaceae).

The seeds of some species are eaten raw or cooked. It is tannin obtained. Oil is obtained from some species. The medicinal effects of individual species were examined.