Carl Friedrich Franquet , painting by W. Jordan from 1832. The work shows in the background around the coffee table (from left to right): Wife Sophie, geb. Kraut, her cousin Minna Hass standing by the window, on the right at the table mother-in-law Maria Dorothea Kraut, widow of Albert Jacob Kraut and on the door frame a self-portrait by the artist Jordan.

Carl Friedrich Franquet (born May 2, 1783 ; † August 22, 1851 in Braunschweig ) was a German businessman , entrepreneur and Braunschweig officer.

Franquet is said to come from a Braunschweig family of Austrian origin. His father was a stable master in Saxony-Meining before he opened a riding school in Braunschweig in 1786 . When his son Carl Friedrich was four years old, his father accepted the position of stable master at the University of Helmstedt . Carl Friedrich was then adopted as a foster child by Ludwig Otto Bleibtreu (1752-1820), a friend of his father's, Braunschweig chicory coffee maker and founder of the chicory factory Ludwig Otto Bleibtreu . Since Bleibtreu's marriage was childless, Carl Friedrich Franquet was soon named as the entrepreneur's heir.

After Franquet had completed five years of training in Lüneburg and Mainz , he joined the flourishing company of his foster father in 1803, which he passed on after his death in 1820. Under his leadership, the company, which was founded in 1781, was managed as one of the very few in the industry without prejudice to the economic crisis caused by the Prussian customs policy among Brunswick companies.

In 1830 Franquet was a co-founder of the Braunschweiger Bürgergarde , whose vice-commander he became the following year. When the riots broke out in the city on July 24 and 25, 1831, Franquet, who was also a major and battalion chief at the time, managed to master the critical situation by taking a prudent approach. Three days later, he received a letter of thanks from Duke Wilhelm of Brunswick , in which the latter expressed “appreciation, complete satisfaction and thanks in the most honorable and flattering manner”. In 1845 he founded the "Corps of Uniformed Citizens Riflemen of the City of Braunschweig", of which he was the first in command. Like his father, Franquet was known as a horse lover. He was president of the "Association for the Breeding of Noble Thoroughbred Horses" and from 1837 to 1847 treasurer of the "Association for the Promotion of Domestic Horse Breeding". In addition, Franquet organized the first horse races in Prinz-Albrecht-Park around 1840 .

Carl Friedrich Franquet married Sophie, born in Lüneburg. Kraut (approx. 1785–1835), whom he met during his training in the city. She was the daughter of the Lüneburg senior syndicate Albert Jacob Kraut (born September 30, 1747 in Lüneburg; † September 21, 1788 ibid), among other things the founder and co-editor of the annals of the Braunschweig-Lüneburgische Churlande , employee of the General German Library and the journal of and for Germany . In addition, he published his own essays in Hanover magazine and his own poetry in the Deutsches Museum and in the Göttingen Musenalmanach .

The Franquets' marriage remained childless. However, the couple took in the three children of a deceased brother of Franquet, of whom Karl Ludwig (1817–1871) and Friedrich (1821–1867) successfully continued the “Ludwig Otto Bleibtreu chicory factory” as heirs. 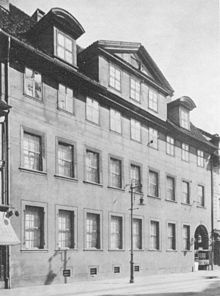 Steinweg 4 : From 1748 to 1786 the town commandant's house. Then Ludwig Otto Bleibtreu lived and worked in his office . After his death in 1820 inhabited by his successor Carl Friedrich Franquet and until 1931 by art collector Arthur von Franquet .

Ludwig Otto Bleibtreu was one of the wealthiest citizens of Braunschweig in his time. He bought the representative, early classicist building at Steinweg 4 ( insurance company number 1956), including the furniture and art objects it contained, at the end of the 18th century and used it as a residential and commercial building until his death. So did his heir, Carl Friedrich Franquet. The childless Franquet, in turn, left his two nephews a flourishing company and the Steinweg 4 house. The company remained family-owned until 1909 and continued under the same name until the late 1930s. Steinweg 4 was destroyed in the Second World War. One of his relatives and successors in corporate management was the art collector Arthur von Franquet (1854–1931).