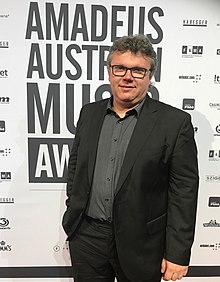 Zierhofer is the son of the stonemason Peter and the handicraft teacher Rosalia Zierhofer. At the age of 9 he began to play the accordion, at the age of 12 he took his first piano lessons. After graduating from the BORG Wiener Neustadt , he studied in 1986 at the Pedagogical Academy in Baden near Vienna for teaching at secondary schools in German and music education. During his studies he worked as a studio and live musician. From 1982 to 1995 he was a dance musician in regional cover bands, the "Bugsy Malone" and later the "Bunnies". The first music productions in Vienna with Horst Chmela and Mandy from the Bambis followed. After six years as a secondary school teacher at the Musikhauptschule Wiener Neustadt and leading a youth choir in Bad Fischau , he tried a solo career as Julian Bach in 1997, but it failed. At the same time, however, he took the opportunity to work his way up as an arranger and composer at the then market-leading label KOCH International. Zierhofer has been running his own recording studio, label and music publisher Stella Musica in Wiener Neustadt since 2002. He has been married to Tanja Skof since 1992. The couple have four children.

Christian Zierhofer composed over 400 popular hits. The most famous ones include get dressed and go , you were the hottest mistake of my life for the Nockalm quintet and a man's dream for Jazz Gitti . In addition, Zierhofer created compositions for advertising and wrote a. a. the signations for the ORF productions Schlagerkarusell and Stars in Gastein. As a composer he was successful at the Grand Prix of Folk Music : 2002 I hear Chopin ( Maxi Arland ) - victory of the German qualification in Erfurt . 2005 Don't look away, we are the future ( Nina Stern ) and the Zillertaler Haderlumpen 3rd place in the final in Zurich . In 2014 singles followed for Andy Borg ( San Amore ), Marc Pircher in a duet with Claudia Jung ( Das Buch der Liebe ) and Der Planet der Lieder for die ( Kastelruther Spatzen ). In 2017, Why I (Music: Marc Pircher / Christian Zierhofer) reached number 1 in the Austrian airplay charts.

In 2002 he accompanied Francine Jordi as a producer and choir singer to the Eurovision Song Contest in Tallinn and came 22nd for Switzerland . This was followed by two national tours by the artist, which he oversaw as musical director.

Work with Karel Gott , GG Anderson , Marianne & Michael and Carl Peyer followed . In 2013 Zierhofer produced the song Tene vai composed by Nino de Angelo for Allessa in a duet with Bernhard Brink and achieved placements in the German and Austrian airplay charts. In 2015 he was nominated for the Amadeus Austrian Music Award in the category “Songwriter of the Year” with You were the coolest mistake of my life ( Nockalm Quintet ) with lyricist Dagmar Obernosterer .