Clarence Muse (born October 14, 1889 in Baltimore , Maryland , † October 13, 1979 in Perris , California ) was an American film and stage actor, writer, poet, composer, director and singer and lawyer. He is considered an African-American show pioneer and was inducted into the newly founded Black Filmmakers Hall of Fame in 1973 - together with Gordon Parks . He was also the first African American actor to be announced as a "star" in the opening credits. 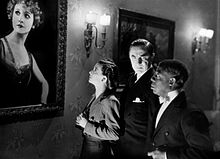 Clarence Muse was born in Baltimore to Alexander and Mary Muse. He studied at Dickinson College in Carlisle ( Pennsylvania ) and made 1911 its international degree in law . Because of the poor conditions for black lawyers, he switched to show business at the latest in the early 1920s. During the Harlem Renaissance in the 1920s, Muse played in two Harlem theaters in New York, the Lincoln Players and the Lafayette Players. At the Lafette Players, under the direction of the British-born Robert Levy, it was his goal in particular that dark-skinned actors could achieve recognition and respect as well as their white colleagues. He helped in the production of various pieces and also participated as the author of various skits, songs and pieces. Muse also appeared as a singer in operas, minstrel shows or in vaudeville shows.

After a short time in Chicago , Muse moved to Hollywood with the beginning of the sound film in the late 1920s , where he starred in Hearts in Dixie (1929), probably the first film by a major Hollywood studio with an exclusively African-American cast. Until his death he was to play regularly in Hollywood, so that he came to almost 160 film and television appearances in the course of his long career. Among other things, he played a supporting role in Frank Capra's adventure film Das Luftschiff (1931) and in the same year played a likable porter in the pre-code drama Safe in Hell . Nina Mae McKinney , Muse's co-star in Safe in Hell , also sang (When It's) Sleepy Time Down South in that film . Muse wrote this song together with siblings Leon and Otis René in 1931. (When It's) Sleepy Time Down South was later best known through Louis Armstrong , for whom the widely played song was a kind of "trademark".

While Muse mostly had to be content with supporting roles in Hollywood films, he also played leading roles in Afro-American in-house productions: In the dark drama Broken Earth (1936), Muse was shown as a black farmer who prays for the life of his sick son and is successful with it. The film was shot on a southern farm with (except for Muse) amateur actors. For the Hollywood musical drama Way Down South with child star Bobby Breen , he wrote the script and the songs for the film together with Langston Hughes , and he also acted as an actor. Way Down South showed African Americans in central roles who, in contrast to many other films of the time, acted surprisingly free of clichés. In 1943, Muse was the first African American director of a Broadway production with Run Little Chillun . In the same year he had a small role as a sleeper-car attendant in Alfred Hitchcock's thriller In the Shadow of Doubt . Although the dark-skinned character actor repeatedly played stereotypes on the screen as well as in the theater, he was known as a distinguished fighter for better African American roles. But he was also repeatedly reproached for stereotypes such as his long-standing theater role as Uncle Tom . The critic Donald Bogle replied that these people had overlooked the fact that he had played this role "with great intelligence and thoughtfulness."

In the 1950s, Muse was still making films such as John Ford's Who the Sun Is Smiling for , but also increasingly starred on emerging television, such as the pianist Sam in a television adaptation of Casablanca or as Joseph in the television series Disney Land . In the 1960s and 1970s he only appeared occasionally, his last major role was in 1979 as the horse owner Snoe in The Black Stallion alongside Mickey Rooney and Kelly Reno . Muse was married twice: after divorcing his first wife Willabelie - they had three children - he was married to Irene Ena from 1952 until his death. Clarence Muse died on October 13, 1979, the day before his 90th birthday, of a cerebral haemorrhage .