Memorial for the homosexuals persecuted under National Socialism

The memorial for the homosexuals persecuted under National Socialism is a memorial at Berlin's Tiergarten , which was inaugurated on May 27, 2008.

The monument designed by the Danish - Norwegian artist duo Elmgreen and Dragset is a 3.60 meter high and 1.90 meter wide concrete cuboid ; A short film can be seen through a glazed opening. The work is the third fully plastic memorial of its kind in Germany after the Frankfurter Engel (1994) and the Cologne Rosa Winkel (1995). The erection of the memorial was decided by the German Bundestag in 2003 in the course of the discussion on the design of the memorial for the murdered Jews of Europe .

At the memorial there is a plaque in German and English , which also reminds of the persecution in the Federal Republic and the GDR (see paragraph 175 ).

The film shown in an endless loop should be regularly replaced by a new one according to the original plan. To this end, an invitation to tender should take place every two years and a jury should select the new film.

The film, which has been shown inside the monument for three and a half years since the inauguration, shows two men kissing in the Tiergarten and was shot on an old ORWO black and white film by director Thomas Vinterberg and cameraman Robby Müller on behalf of the artists Elmgreen & Dragset . This film was replaced on January 26, 2012 by the film Kuss ohne Ende with kissing women and men of different ages, which was shot by Gerald Backhaus together with Bernd Fischer and Ibrahim Gülnar. The original film was shown again from October 7, 2014 to January 10, 2017, and the Backhaus film has been shown again since then. 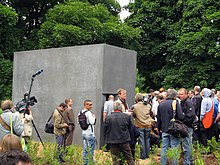 The homosexual persecuted by National Socialism were excluded from public commemoration in Germany for a long time. A rethinking in the politics of remembrance did not begin until 1985 with the speech of Federal President Richard von Weizsäcker on the 40th anniversary of the end of the war , in which the hitherto hidden groups of persecuted were included in the commemoration for the first time. The initiative to commemorate homosexual Nazi victims, founded in 1993 , to which u. a. Albert Eckert belonged, as well as the Lesbian and Gay Association (LSVD) campaigned for a federal memorial for the homosexuals persecuted under National Socialism .

Protests by the LSVD after the first attack on the memorial

In 2002 the legal rehabilitation of the victims of homosexual paragraph 175 from the Nazi era took place through the provisions of the Nazi Injustice Repeal Act . The German Bundestag decided on December 12, 2003 to erect a memorial in Berlin-Mitte . The inauguration of the monument on May 27, 2008, which was attended by the Governing Mayor Klaus Wowereit and the Minister of State for Culture Bernd Neumann , met with great media interest. On January 27, 2012 , Albert Eckert was awarded the Order of Merit of the Federal Republic of Germany for his commitment to the initiative to commemorate homosexual victims of National Socialism .

“As Federal President, one thing is important to me today: your country has made you wait too long. We're running late. What has been said to other groups of victims has so far been denied you. Therefore, today I ask for forgiveness - for all the suffering and injustice that have occurred and for the long silence that followed. "

He also made it clear for the first time that the dignity of gays, lesbians and bisexuals, all queers, trans and intersex people is inviolable and is under the protection of the German state.

“To all of you here at the monument, and to all gays, lesbians and bisexuals, all queers, trans and intersex people in our country, I call out to all of you today: Your sexual orientation and your sexual identity are of course under the protection of our state. Your dignity is as naturally inviolable as it should have been at the very beginning. " 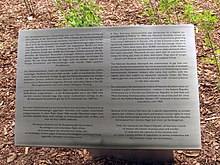 Video sequence of the monument

An art competition was held to implement the Bundestag resolution. This was organized by the State of Berlin on behalf of the Federal Republic of Germany. In 2006, a jury selected a design by the Berlin-based Danish-Norwegian artist duo Michael Elmgreen and Ingar Dragset as the winner of the competition.

In a public colloquium to prepare the content of the art competition, the LSVD formulated the position:

“The Nazis' practice towards homosexual women and homosexual men was very different. These differences must be known for the monument to be a success. At the same time, however, it is important to avoid that the monument becomes exclusive and lesbian women may not feel addressed. "

According to the Bundestag resolution, the memorial is intended to honor the persecuted and murdered victims, keep the memory of injustice alive and set a constant signal against intolerance , hostility and exclusion towards gays and lesbians .

The film presentation, which can be viewed through an opening in the memorial, was different from 2012 to 2014. As early as 2007, before the official opening, the Federal Government Commissioner for Culture and the Media, Minister of State Bernd Neumann, announced a further development of the monument concept after approval by the LSVD and the artists. The film is to be changed every two years, with a jury of experts making the decision on the newly shown film. Since 2014 there has not been a new tender for the design of the film.

The draft was criticized on the part of the LSVD because it did not adequately consider the lesbians in the warning about the future. For this reason, the LSVD representative in the jury had also voted in favor of another competition entry. He formulated:

“Lesbian relationships have not been prosecuted. Even if the Nazis were aware of the homosexuality of imprisoned women, this still meant heightened threats. Overall, however, the situation of lesbian women under National Socialism 'can hardly be substantiated with clear criteria of persecution' [Claudia Schoppmann, lecture in the preparatory colloquium for the art competition on the monument, 2005]. But gays and lesbians together experienced the destruction of their infrastructure by the Nazis. Lesbians lived intimidated and were limited in their development opportunities. [...] The presently planned representation creates the impression that the memorial refers exclusively to gay men. The monument is also intended to symbolize learning from history in the sense of 'never again'. Especially for the task of setting an example against exclusion in relation to the present, lesbians must not remain invisible - but this is exactly the case according to the planned draft. It is by no means sufficient to include lesbians in the context of additional information; rather, they must be an integral part of the artistic presentation. "

On August 28, 2006, the LSVD held a discussion event with the artists on this subject in Berlin. Shortly before the event, the magazine Emma protested against “that the planned homosexual memorial in Berlin only shows male homosexuals” and demanded “that female homosexuals are also given due consideration”.

The artists responded to the sharp protest with a declaration entitled A portrait is not a representation . They rejected the intention of exclusion and pointed out: “A monument is a form of artistic expression and the result of personal interpretation - this makes it a work of art.” They explained their “decision to take the picture of two kissing boys [... with] that we see machism and homophobia as closely related. The self-image of a male sexuality that fears everything that could potentially threaten it. "

The criminal law professor Monika Frommel told the taz about the dispute over the memorial for the homosexual victims of the Nazi era : “To be ignored, like the lesbian women by the National Socialists, may be offensive, but it is not a tragedy - and certainly not persecution. The memorial should only be dedicated to gay men. "

In a resolution dated October 28, 2006, the general assembly of the LSVD Berlin- Brandenburg decided in favor of the monument "in the sense of the Bundestag resolution of December 12, 2003, taking historical facts into account, in the form of the artistic competition on January 25, 2006 award-winning design by Michael Elmgreen and Ingar Dragset ”. The LSVD regional association turned against changing the award-winning design in favor of any kind of inclusion of lesbian women.

The heads of the concentration camp memorials also spoke out against the “distortion of the past for present purposes - and no matter how well it is meant” in a statement dated May 19, 2007. The historian Joachim Müller has carried out his extensive research on the situation of lesbian women in the National Socialism and the debate about the memorial documented in a collection of materials and summarized in a thesis paper. The historian Alexander Zinn, who examined the topic in his dissertation, also comes to the conclusion that the persecution of female homosexuality under National Socialism cannot be historically proven.

After a lengthy discussion process, the Federal Government, with the involvement of Minister of State for Culture Neumann, decided on the shape of the memorial for the homosexuals persecuted under National Socialism. Accordingly, the film shown in the memorial is exchanged every two years so that pictures of women can also be shown. The decision on the new film to be installed should be made by a jury of experts.

The upcoming change of video in 2010 also led to a resurgence of the dispute. Again the heads of the concentration camp memorials and various historians protested against the plan to now show a lesbian kiss in the memorial: "We must be careful not to instrumentalize the culture of remembrance and commemoration for current or future interests." Minister of State Neumann met the Criticism with a statement in which he cited the ban on magazines for lesbians as evidence that lesbians had also been restricted in their rights to freedom.

A memorial service was held for Christopher Street Day (CSD) on June 28, 2008, which was also attended by Rudolf Brazda , who was imprisoned in Buchenwald concentration camp for homosexuality . Speaking at the event were, among others, Bundestag Vice President Wolfgang Thierse , Petra Rosenberg , the chairwoman of the regional association of German Sinti and Roma Berlin-Brandenburg, LSVD federal board member Günter Dworek and Alexander Zinn , then managing director of the LSVD Berlin-Brandenburg.

Less than three months after the inauguration ceremony, the monument was willfully damaged for the first time. On August 17, 2008, strangers smashed the window through which the kissing scene could be seen. Politicians from various parties saw this as evidence of the increasing propensity to use violence against homosexuals. The following day, a protest rally with 250 participants and a speech by the governing mayor took place in front of the monument. Another attack occurred on the night of December 16, 2008. The viewing window through which the video sequence can be seen was smashed again. On April 5, 2009, the memorial was damaged for the third time in nine months, and the window was scratched.

Commons : Memorial to the homosexuals persecuted under National Socialism  - collection of pictures, videos and audio files

Wikinews: Memorial to the Homosexuals Persecuted Under National Socialism  - in the news