This article deals with the district Echte in the municipality of Kalefeld in Lower Saxony. For more meanings, see Echte (disambiguation) .

The village of Echte is located in southern Lower Saxony in the Northeim district in the municipality of Kalefeld , south-east of the Aue between the Bierberg , Kahlberg and Luhne elevations .

The Echter Castle was located on the Klausberge in the southeast above Echte. The foundation of the castle is unknown. It was mentioned in the documents about the Herlingsberg War between Bishop Siegfried von Hildesheim and Heinrich II (called the miraculous). After the victory at Einbeck in 1290, Bishop Siegfried and his troops wreaked havoc through the principality of Grubenhagen . Five of Heinrich's castles were destroyed in the process, including the Echter Burg in 1291. Remnants of walls and walls, as well as an almost buried fountain, could be seen until 1900.

In the 13th century the village consisted of four full courtyards, six to eight half courtyards and about twelve kothstellen , as evidenced by documents from that time. It may have been around 150 residents.

The church registers have been completely available since 1635.

The craft life in Echte was very early and strongly developed. In 1657, 86 houses were built in Echte and the place had 362 inhabitants. 16 of them were craftsmen. Real was an emerging community. This proves the fact that in 1779 Echte had 479 inhabitants. Nothing had changed in the number of houses. However, there were 35 craftsmen in Echte (1 surgeon, 1 horse doctor, 2 millers, 4 tailors, 6 cobblers, 8 linen weavers, 1 turner, carpenter, window maker and wheel maker, 5 carpenters and 2 blacksmiths and bricklayers each). The court statistics show 10 Meier and 60 Groß- and Kleinköthner. Echte continued to develop into a central community. In 1821 there were 694 inhabitants.

The number of 944 inhabitants in 1845 decreased within three years to 902 inhabitants. In the previous ten years, but especially during the years 1845 and 1846, there was a fairly large emigration to America - partly still supported by the community; a total of about 100 people, mostly families without real estate and individual craftsmen and day laborers. The number of residential houses was 103.

Around 1880, a large number of real citizens emigrated overseas again.

During the Weimar Republic, Echte had 776 inhabitants and provided accommodation and livelihood to many evacuees from the Rhineland.

After the end of the Second World War , many evacuees left Real to return to their hometowns, which were mostly destroyed by the war. This created living space for the refugees who came from all directions. As in most parts of Germany, the entire population structure was changed. From 1945 to 1948 the population increased from Echte to approx. 2,000, ie twice as much as before the start of the war.

In the 20th century, the village became one of six locations in Lower Saxony in which external fire water containers for helicopters are stored to fight forest fires.

These were relocated in 2014 from the state of Lower Saxony to the location of the fire brigade technical school in Celle.

Echte was incorporated into the municipality of Kalefeld on March 1, 1974.

Local mayor is Bernd Andreas Hermann SPD. He is the chairman of the local council. This consists of 9 people. 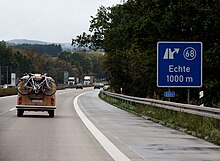 Announcement of the exit "Echte" on the federal highway 7

The place is at the intersection of a federal road and the federal highway 7 . The Echte station was on the Osterode – Kreiensen railway line . This is shut down.

As part of the Kalefeld municipal administration, the Ordnungsamt, residents' registration office and registry office are located here. A two-class elementary school and a kindergarten (approx. 100 places) with an integration group. A group of after-school care centers is also attached to the facility and is housed in the house near the church.

Furthermore, commercial and craft businesses and other service companies are located in the village.

Echte has 16 clubs / associations. The clubs include TSG Echte and MGV Echte.

The Nicolaikirche, whose parish belongs to the Harzer Land parish , was built in 1795.

Places in the municipality of Kalefeld