The title of this article is ambiguous. For the evangelical pastor of the same name * 1888 see Friedrich Veit (pastor) . 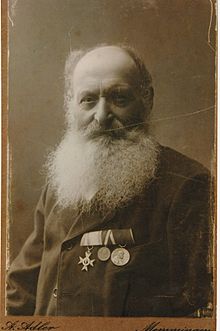 Friedrich Tobias August Veit (born May 18, 1861 in Augsburg , † December 18, 1948 in Bayrischzell ) was a doctorate Protestant theologian , pastor and dean in Munich. In the Kingdom of Bavaria , Veit had been a member of the Bavarian church leadership as president of the royal Protestant senior consistory since 1917 . After the revolution of 1918 and the reorganization of church conditions, he was the first and only church president in Bavaria from 1921 to 1933 .

Friedrich Veit was born in Augsburg on May 18, 1861, the son of the teacher Samuel Veit and Sophie Friederike Henriette Veit, née Schmelz. The paternal ancestors came from an old Swabian peasant family who lived in Steinheim and Frickenhausen near Memmingen , the mother's from the Mark Brandenburg . Friedrich Veit first attended the elementary school at St. Jakob in Augsburg and later the humanistic high school at St. Anna . His father died on April 28, 1877.

From 1879 to 1883 Friedrich Veit studied theology in Erlangen and Leipzig . During his studies he became a member of the C. St. V. Uttenruthia Erlangen in 1879 and of the SBV Nordalbingia Leipzig in 1880 . He was then in 1883 candidate of the Theological Seminary in Munich, where he on 2 December of the same year ordained was. In 1884 Veit took up a travel preaching position based in Weilheim in Upper Bavaria . From February 1886 he was city vicar at the St. Matthew Church in Munich and from there in August 1887 was appointed pastor of Schwarzenbach an der Saale in Upper Franconia.

In 1891 Friedrich Veit returned to Munich and took over the fifth pastor's position, in March 1896 the fourth. In 1900 he became the second pastor of St. Matthew, when he also gave religious instruction in elementary schools and high schools as well as with the royal cadet corps . In 1903 and 1905 Veit also worked as a season preacher in Berchtesgaden . In 1905 he was appointed the first pastor of St. Markus and at the same time dean of Munich. Ten years later, on January 1, 1915, he was appointed consistorial advisor to the royal Bavarian upper consistory , the highest church authority in Bavaria under the "Summepiscopus" , the Bavarian king. After Hermann von Bezzel's early death in 1917, Friedrich Veit was the senior consistorial councilor, his successor as president of the authority until the revolution in November 1918 . In the same year he took over the co-editor of the Neue Kirchliche Zeitschrift , for which he wrote the annual overviews titled “Zum Neuen Jahr” until 1933.

In the autumn of 1920, the Bavarian church constitution was passed with the help of Friedrich Veit, and Veit was elected church president. In 1921 he was awarded the honoris causa theological doctorate by the Erlangen University in recognition of his achievements . The church constitution came into force on January 1, 1921, with which the Bavarian Church also took on the title of Evangelical Lutheran Church in Bavaria . From 1922 Veit was also President of the German Evangelical Church Federation . As a member of the church committee, he took over the leadership of the school committee. In 1925 he took part in the Stockholm World Conference of Churches , ever since he became friends with the later Nobel Peace Prize laureate Nathan Söderblom .

In his function as the Bavarian church president, he worked in 1924 on the first contract between a regional church and the state, the Bavarian State Church Treaty . He also contributed to the publication of a new hymn book in 1927, a new catechism in 1928 and a biblical story in 1932/33. On October 24, 1928, he took part in the laying of the foundation stone of the office building for the Munich Regional Church Office , which today has the address Katharina-Bora-Straße 11 .

After the National Socialists came to power , Friedrich Veit was urged to resign on April 11, 1933 and then resigned; He did not live to see his 50th anniversary as pastor in the service. His successor in the church leadership was - with the new title of regional bishop - Hans Meiser . He lost his apartment on the Isar, which Veit moved into when he was retired, in a bomb attack in 1944, whereupon he moved to Bayrischzell a short time later. He died there on December 18, 1948.

Friedrich Veit is unique in the not very long history of the Evangelical Lutheran Church in Bavaria because of his title “Church President”. Because all of his successors since 1933, in which Hans Meiser replaced him, then bore the title of “regional bishop”. The fact that Friedrich Veit was almost forgotten in the decades after the Second World War was probably due to the fact that the upheaval after this war was even more serious than after the First World War. But in this difficult time after the end of the German Empire and the end of the monarchy in Bavaria, he was the last Bavarian senior consistorial president to be responsible for the Lutherans in the state of Bavaria on the right bank of the Rhine. The epoch-making documents of the church constitution of 1920 and the treaty of the Evangelical Lutheran Church with the Free State of Bavaria from 1924 had already become so natural foundations of the regional church after 1945 that Friedrich Veit was hardly remembered. But he played a decisive role in the upheaval phase in the regional church during his tenure.

The church constitution of 1920

The basis for the necessity and justification of the church constitution was Article 137 of the Weimar Reich constitution of August 11, 1919, which states that there is no state church. In addition, the monarchy in Bavaria had come to an end due to the revolution and the former "Summepiscopus" of the Bavarian Lutherans, the Bavarian king, no longer existed. Something new had to be created, but the incumbent senior consistorial president Veit led the contract negotiations according to the principle he had set himself, not to attempt a new building, but to preserve the Bavarian regional church as a national church as well as a confessional church through renovation. In the constituent general synod - from August 17 to September 12, 1920 in Ansbach Castle - the constitution was passed unanimously on September 10. And on the same day, Friedrich Veit was elected church president almost unanimously. On January 1, 1921, the church constitution came into force and the Bavarian regional church has been called the Evangelical Lutheran Church in Bavaria since then .

The office of church president

Friedrich Veit rejected the title of regional bishop in view of the large number of Catholic Bavarian archbishops and bishops, although as church president he held a kind of powerful bishopric that encompassed three important areas:

The State-Church Treaty of 1924

This first treaty between a regional church and state authority was also a kind of model for structuring the relationship between church and state in the other German states. The Catholic Concordat was also concluded at the same time. The relationship between church and state was contractually regulated in these conventions. Church President Veit attached particular importance to the precise structure of the school system. The essential parts of this contract are still in force today. After 1945 it was only further developed and refined. For example, in 1968 the Protestant denominational schools ceased to exist because the Christian community school was introduced at that time .

Evaluation of the achievements of Friedrich Veits

In the foreword of his book Friedrich Veit. Church leadership between the Empire and National Socialism , Wolfgang Sommer emphasizes the following merits of the first and only church president:

"From the time of the monarchy he led the church into the new epoch after the First World War, which represents a political and ecclesiastical turning point after centuries."

He appreciates Vitus' critical stance towards National Socialism and the rising party of Hitler as follows:

"The fact that the Bavarian regional church in the Weimar Republic took a clearly anti-Nazi stance on the part of the church leadership up to 1933 is thanks to the work of church president Veit."