The Friedrichs orphanage in Rummelsburg was designed in 1853 and built between 1854 and 1859 for orphaned boys and girls who were picked up in Berlin and the surrounding area. It was created on behalf of the Berlin magistrate on the northeast bank of the Rummelsburger See with the address Hauptstrasse  7 on a 13  hectare area owned by the city. Orphans were housed in the buildings until 1949 , later they were also used for the convalescence of children and young people from time to time. The two preserved buildings (boys' houses) and the surrounding wall are under monument protection . 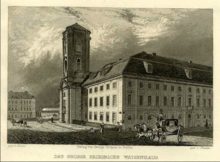 Friedrichs Orphanage, around 1830
Steel engraving based on a template by Friedrich Wilhelm Klose

Elector Friedrich III. had the previous facility of the Friedrichs orphanage Rummelsburg built on Stralauer Strasse by Martin Grünberg from 1697 . A hospital was initially built on an area between Stralauer Strasse, Neuer Friedrichstrasse and the Waisenbrücke on the Spree . The year 1702 contained in a portal inscription is considered to be the year the hospital was founded. At this point in time the front building on Stralauer Strasse and the right side wing with a large prayer room on the second floor were completed. In honor of its founder, who was crowned last year, it was named Großes Friedrichs-Hospital , although it had been used as an orphanage and infirmary since 1701. The continuation of the construction, which was taken over by Philipp Gerlach after Grünberg's death and which came to a standstill temporarily in 1712/1713, was taken over by his successor Friedrich Wilhelm I after the death of Friedrich . He had a church built into the building instead of the prayer room that had become too small (consecrated in 1716). In addition, the hospital received a “new” wing between Stralauer Strasse and the church (until 1725) and the construction of a tower with three bells and a clock (1727) dominating the central axis above the church was completed. According to the traditional house rules of 1702, the hospital was intended to accommodate “orphans, the sick, mad or even nonsensical, item other poor” from the local population, as well as other “loose rabble ”. Already in 1701 98 orphans were cared for by twelve "old women" in the house and 36 other, mostly younger orphans as Kost- and foster children in foster care verdungen , also 115 indigent patients (including to 1711 also misleading) supplied in the infirmary or in their own neighborhoods . In 1718 there were 16 old people, 140 sick people and 291 children (including 99 "Verdunge"). The further growth was not least a consequence of the militarization of the state. Because of the very high and steadily increasing proportion of orphans, Friedrich Wilhelm I donated part of the funds to support 300 such orphans in 1719, so that 400 children were cared for in the hospital in 1721 and around 500 in 1728. The construction of the new wing and the inclusion of a neighboring house were justified in 1715 by the fact that space was needed to accommodate 50 abdicated soldiers in order to counteract the begging and delinquency of this population group. While the proportion of elderly and infirm people cared for in the house decreased again in the 18th century due to the creation of special facilities, the number of around 500 "house children" remained roughly constant until the 19th century, with the result that the name Friedrichs-Hospital gradually by Friedrichs orphanage , and likewise the name hospital church was replaced by orphanage church . In 1839 there were 429 internal and 635 foster children, but in the following period the number of house children was limited to 300. Since 1802 it has temporarily housed the Royal Protective Pox Institute, which was set up on the initiative of Christoph Wilhelm Hufeland and where children and adults from Berlin and the surrounding area could be vaccinated against smallpox free of charge .

The orphanage and the other facilities of the royal poor management subordinate to the royal poor management (Sylthaus-, Dorotheen- and Koppesches hospitals as facilities for women, poor house in the Alexanderstraße , new hospital in the Wallnerstraße) were in 1820 according to the town order of 1808 from the royal to the newly formed urban poor directorate. The cramped spatial conditions and the increasing need for further care facilities due to the rapid population growth led to the fact that the magistrate decided on March 10, 1853 to create new institutions for the care of the sick, orphans and the poor. For the new orphanage, the choice fell on the location on Rummelsburger See , the planning was entrusted to the architect Gustav Holtzmann (also: Holzmann, † 1860) , who came from Wroclaw and was appointed city planning officer in 1852 .

The continued use of the old orphanage, which continued under its own administration until at least 1857, was initially disputed. After the new orphanage in Rummelsburg was completed and opened in 1859, the central municipal orphanage remained in the old orphanage in Stralauer Straße until 1866, equipped for the temporary accommodation of around 50 children and used as a registration and collection point for needy or apprehended children, which were transferred from there to the Rummelsburg orphanage or other institutions. In 1877 a male infirmary was set up in the rooms of the old orphanage . Towards the end of World War II , the building was destroyed by Allied air raids around 1943 .

The orphanage in Rummelsburg

On the basis of the decision of 1853, Gustav Holtzmann was commissioned to plan a new orphanage. He submitted drafts for a spacious new institution, which consisted of pavilion-like individual buildings in a park. In addition to four two- to three-storey red brick buildings with a yellow brick facade for the separate accommodation of the boys and girls, economic and social buildings, a hospital, a nursery, a boiler house, a water tower and in the north an orphanage church including a rectory were built according to these plans . 500 boys and girls aged up to 15 years were housed in the orphanage. Contemporaries particularly praised the new facility, it would have "fresh air and good drinking water, [...] the children live under favorable hygienic conditions, can swim in the lake in summer and ice-skate on it in winter". The adolescents in the orphanage were used for smaller upcoming jobs. From the age of 14 onwards, after completing seven years of schooling, the boys were able to learn professions such as cooks, gardeners, shoemakers or bakers; the girls received training in baby care, child rearing or housekeeping. Up until 1925 there was even an infant and a sick department, which were dissolved again when the Hubertus Hospital was completed. The prison management kept seven cows to take care of the inmates, and they also supplied fresh milk for all the children every day.

After the Prussian law on forced upbringing came into force in 1878 , the city of Berlin had the Rummelsburg workhouse built next to the orphanage based on plans by Hermann Blankenstein , which was primarily intended for orphans, but later developed independently.

The hospital apparently also served as a military hospital after the Franco-Prussian War of 1870/1871 . The hospital for the orphan administration of Berlin , which belongs to the orphanage , has been led by the doctor Erich Müller (1868–1952) since 1902 . Since 1925, the orphanage's hospital has also been officially open to the general public for medical care for children.

The Friedrichs orphanage after 1940

In the final months of the Second World War, the buildings were badly damaged and the church disappeared completely. After the end of the war there was a provisional restoration and continued use as an orphanage, because now there were mainly war orphans. In 1949 the orphanage was given up, but some buildings continued to be used as a “remedial children's home” until 1953. The operator was a diakonia facility that carried out further treatment for convalescent children or opened the houses as reception and transit homes.

In 1950 the ruins such as the church or the girls' houses were torn down and the remaining buildings were repaired. Part of the north-western area became the municipal storage area, the bank was initially left to nature. In 1961, the area was still shown as an orphanage on a Berlin city map, but marked with the symbols for bushes and trees. The two surviving boys' houses served as general administration buildings from 1953, and from 1960 as office buildings for the newly stationed 35th border regiment of the GDR border troops , which was responsible for border control of the water section. A precast concrete barracks was built on part of the orphanage park as accommodation and some boat sheds were set up in the bank area.

From 1995 the owner of the land, the now responsible Senate of Berlin , decided on a development plan and declared the entire area between the main road and the bank to be the Rummelsburger Bucht development area . Investors were sought and found, architecture competitions were held. The two remaining residential buildings of the orphanage at the north-western end were structurally in good condition and were placed under monument protection. In 2003 they were extensively renovated in accordance with listed buildings and converted into apartments. In addition, two of the new residential streets were given names that recall the more than 100-year history of the Friedrichs orphanage: An den Knabenhäuser and Gustav-Holzmann-Straße . The medallion square in the center of the new residential area also corresponds to one of the earlier spaces in the park. 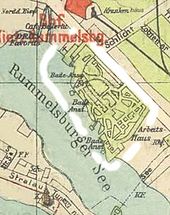 On the shore of the bay there were bathing places for the boys and a bathing ship for the girls. The buildings were in a park-like area that was used by the inmates to stay in the fresh air. The complex consisted of a two-wing main building, which contained, among other things, communal and conference rooms as well as official apartments, eight free-standing orphanages and an economic building with a farm yard and hospital ward. In 1890, Hermann Blankenstein built a few more outbuildings.

The streets (imaginary continuation of Schlichtallee, Hauptstraße and Hildegard-Marcusson-Straße) roughly mark the historical boundaries of the orphanage area. The central promenade of the site (BerlinCampus) has been restored , which houses the former water tower of the boiler house as a dominant feature and which, in a green area, is reminiscent of the floor plan of the former institution church.

In connection with the development of the area, which began in 2007, archaeological soil investigations were carried out, whereby remains of the institution's own cemetery were found under the parking lot from 1951–1990 (which covered the cemetery with a 40 centimeter thick layer of concrete) . The burial site was in use between 1859 and 1896 and was closed in 1915. 400 deceased orphans and 96 carers from the orphanage found their final resting place on it. In addition to the bones, tombstones, wooden crosses and even remains of toys were uncovered. Everything together was given a dignified place in the Friedrichsfelde central cemetery . The excavations led to the urban project Gedenkort Rummelsburg . Project manager Rainer E. Klemke worked closely with the director of the Lichtenberg local history museum, Christine Steer, and the excavation manager, the archaeologist Markus Schwanitz. They decided to research the names and causes of death of the children by searching church archives, death books, and cemetery records; Specifically, the names of 181 children and young people were determined; The causes of death were all deficiency symptoms or epidemics such as tuberculosis , typhoid , diphtheria and others. The new burial place in the central cemetery received a memorial stone designed by the artist Helga Lieser in the form of an open book. For the inauguration on November 19, 2014 there was an interreligious ceremony with the Protestant pastor Joachim G. Cierpka, the Catholic pastor Winfried Onizazuk, the rabbi Daniel Alter and representatives of the city of Berlin. As early as 2012, the Lichtenberg District Office had steles with information about the orphanage, including the history of the workhouse, set up along the footpath on the shore of the bay.

On July 12, 2016, a plaque in memory of the boys' houses of the Friedrichs orphanage was handed over to the back of the building at An den Knabenhäuser 10 .