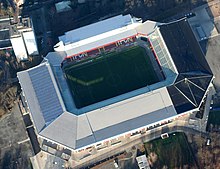 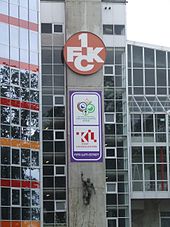 1. FCK coat of arms, logo for the 2006 FIFA World Cup and the devil from Betzenberg at the Fritz-Walter-Stadion 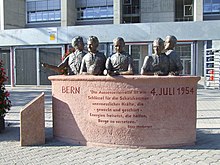 The Fritz-Walter-Stadion , formerly Betzenbergstadion and also called Betzenberg or Betze , is a football stadium in the Rhineland-Palatinate city ​​of Kaiserslautern . It is the competition venue of the third division soccer team 1. FC Kaiserslautern .

It was the venue for five games during the 2006 World Cup . The stadium was given its current name on November 2, 1985 on the occasion of the 65th birthday of Fritz Walter , captain of the FCK championship teams from 1951 and 1953 and the first honorary captain of the German national football team . Previously it was simply called the Betzenberg Stadium or Stadium on the Betzenberg . This is why the stadium is also known colloquially as Betze . After the Second World War , the stadium was named Stade Monsabert for a short time , named after the commander of the French occupation forces, General Joseph de Goislard de Monsabert .

The owner of the previously club-owned stadium has been Fritz-Walter-Stadion Kaiserslautern GmbH, which is 100 percent owned by the city, since 2003.

The Betzenberg sports field , named after the location of the same name, was opened in 1920 at the point where today's Fritz Walter Stadium stands . It was a sand court, on the south side of which spectator stands and a small wooden stand had been built. In 1926 the clay court was replaced by a grass field.

From 1931 at the latest, the Betzenberg had a labor market and economic importance, as it was part of the job creation measures of the “voluntary labor service” as a result of mass unemployment. These measures were part of an emergency ordinance of 1931, which allowed members of gymnastics and sports clubs to work for the club as workers for a small fee. Among other things, the stadium oval was renewed and expanded as well as the grandstand , the spectator terrace , the hockey field and the ticket office. Up to 140 unemployed Kaiserslautern residents were used for this purpose, consisting mainly of members of the 1. FCK. These measures were justified by the fact that the sports field was used to train young people and to carry out military sports. Furthermore, they wanted to alleviate the labor shortage by integrating them into the work process. With the establishment of two standing stands and a grandstand in the north, the capacity was increased to 18,000 spectators.

The participation of the population was also taken advantage of by instructing them in arts and education. These consisted of the "spiritual care" of those willing to work, who received lectures on the purposes and goals of the labor service, hygiene and dental care and historical information on the formation and struggles of the German nation since 1800. This labor market policy was also introduced in other cities in Germany. This work was led by the city association for physical exercises .

From 1933 the stadium was no longer just the venue for 1. FCK, but was also used by the NSDAP for sporting events and events of a political nature. This included sports competitions for the Hitler Youth , the Bund Deutscher Mädel and the German Young People . The stadium was left to the Hitler Youth; the city administration regulated this and paid it to 1. FCK. Since the SA was also interested in the stadium, additional competitions, military sports days and field exercises were carried out; the SA wanted to counter their impending loss of function and thus made use of sport, especially military sport .

Some games of the Kaiserslautern military base team were also played on the Betzenberg, which met with great interest in the local press. Neo-pagan solstice celebrations were also held, as the Betzenberg with its view of the Palatinate Forest created a good atmosphere.

Another reason for choosing the Betzenberg as the political venue was the war memorial that was erected in the stadium on June 21, 1925. It was a noticeable focal point and part of the audience area. Originally, it served to remember the founding members, all those who died in the First World War and the deceased members. However, commemoration of the dead was given a new function under National Socialism . The stadium mutated into a cult site for propaganda stagings . Above all, the war memorial was the starting point for the pre-war glorification at party-political events.

Modernization and expansion to 38,000 spectators

In the course of the following decades the stadium was repeatedly modernized and expanded. The first major renovation in 1953 led to an increased capacity of 30,000 spectators. Further modernizations meant that by 1972 a capacity of around 38,000 spectators was achieved. For example, during the stadium renovation in 1978, volunteers were deployed to volunteer over 5,000 hours. In contrast to National Socialism, the helpers worked voluntarily and without payment in their free time. This capacity remained almost unchanged even with further modernizations until the renovation for the football World Cup in 2006, as the expansion work also involved converting standing room into seating.

In the 1990s in particular, the stadium was completely renovated with the new construction of the north and south stands. For the first time, the north stand offered modern comfort such as VIP boxes and an interior space for the spectators behind the stand. In 1995, the Fritz Walter Stadium was the venue for the final of the European Women's Football Championship . Germany won the game against Sweden 3-2.

Conversion for the 2006 World Cup

After Kaiserslautern was awarded the contract to host games in the context of the 2006 World Cup, further renovation work ( eastward expansion ) began for this event in 2002 , increasing the capacity to today's level. In the last construction phase, the west and south stands were expanded and the north stand was rebuilt. The west and east stands were expanded to the level of the south stand. Finally, the entire roof of the south stand was raised with cranes and hung on the east and west roofs. In addition, the "media tower" and the "log tower" were built in the north-east and north-west corners. The stadium is completely covered, has underfloor heating and its own television studio . What makes the stadium unique is its new photovoltaic system on three of the four stadium roofs. A total of 6,000 square meters are equipped with solar cell modules, making them the largest of its kind.

The renovation work was overshadowed by numerous financial and technical difficulties. During the expansion of the east stand, the contracted construction company Philipp Holzmann had to file for bankruptcy, which in the meantime led to a construction freeze. Since the 1. FC Kaiserslautern subsequently got into financial difficulties and it was foreseeable that the actual renovation costs would be the estimated sum of 48.3 million euros, of which the State of Rhineland-Palatinate 21.7 million euros and 1. FC Kaiserslautern 18.9 million euros and the city of Kaiserslautern 7.7 million euros would, by far, the financing of the project was now also in uncertainty.

Until 2003 the stadium was owned by 1. FC Kaiserslautern. Due to financial problems of the club, the venue was sold together with the young talent center Fröhnerhof for 57.9 million euros to the Fritz-Walter-Stadion Kaiserslautern GmbH, whose sole shareholder is the city of Kaiserslautern. The state of Rhineland-Palatinate and the city of Kaiserslautern assured that they would cover any costs beyond the original plan. Ultimately, the costs had risen to 76.5 million euros, partly due to the rise in steel prices. About two thirds of the difference of 28.2 million was taken over by the state.

The delays caused by the insolvency of Philipp Holzmann AG and the lack of clarity about the financing meant that Kaiserslautern could not be the venue for the Confederations Cup, which will take place in Germany in 2005, as originally planned .

The renovation caused negative headlines again when the stadium was temporarily closed by the city of Kaiserslautern on December 2, 2005 and the Bundesliga game 1. FC Kaiserslautern - Eintracht Frankfurt , originally scheduled for December 3, 2005, had to be postponed after damage to the roof of the east stand occurred. Support pillars were installed for temporary securing, which were removed after the renovation before the 2006 World Cup. For the other games of the season and during the 2006 World Cup, there were no impairments.

The number of spectators at the 2006 World Cup was given as 46,000, as the expansion of the press area on the north stand led to a reduction in the number of regular spectator seats. With a special permit, around 50,000 spectators are admitted to national games. The record attendance for the Fritz-Walter-Stadion was reached with 50,754 visitors at the Bundesliga match between 1. FC Kaiserslautern and FC Bayern Munich on May 6, 2006. The regular capacity of 48,500 spectators was first reached in the game on May 18, 2008 against 1. FC Köln . For the 2010/11 season, the regular capacity was increased to 49,780 spectators. This was made possible by additional VIP seats in the east stand and an increased number of standing room for the guest fans.

Since the 2010/11 season, the allegedly "world's largest solar system on a stadium roof" has been installed on the stadium roof.

The stadium in Kaiserslautern was next to the Ruhr Stadium in Bochum, the Westphalia Stadium in Dortmund, the Ulrich Haberland Stadium in Leverkusen, the Grotenburg Stadium in Krefeld and the Bökelberg Stadium in Mönchengladbach for a long time until the end of the 1990s one of the few pure football stadiums without a career in the Bundesliga. The proximity of the spectators to the field and the volume of the fans gave the stadium the reputation of a “fortress” that guest teams could hardly take.

After the renaming to Fritz-Walter-Stadion in 1985, 1. FC Kaiserslautern seemed to have lost this steady home strength. In the next six home games there were no wins, four draws and two defeats and Fritz Walter disappointed (but not taken seriously) suggested that the stadium should be given its original name again if 1. FC Kaiserslautern could win again .

Even if the stadium, due to its almost rectangular floor plan, has long since ceased to have the curves typical of football stadiums, the west stand is still colloquially known as the west curve .

The main entrance to the stadium on the corner of the north and east stands bears the name “Ottmar-Walter-Tor” in memory of the national soccer player Ottmar Walter , part of the world championship team from 1954. Other entrances were named after the players of the 1954 world championship team coming from 1. FC Kaiserslautern. The gate to the west stand has the name " Horst Eckel -Tor", the south / east entrance is called " Werner Kohlmeyer -Tor" and the east entrance is called " Werner Liebrich -Tor".

The FCK Museum with a permanent exhibition on the history of 1. FC Kaiserslautern is located in the east stand and the north-east tower of the stadium .

The following games were played in Kaiserslautern for the 2006 World Cup :

The German national soccer team has so far played the following matches in the stadium: