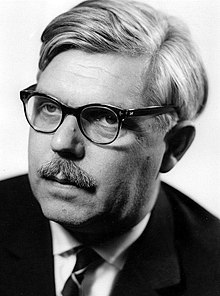 Lewenton's father was the son of a Jewish pharmacist in Yalta who was a journalist for Russian newspapers in Berlin; his mother was a Berliner, a Christian and orphaned at an early age. After graduating from the Joachim-Friedrich-Gymnasium in Berlin in 1921 , Lewenton studied civil engineering at the TH Berlin-Charlottenburg . His teachers included u. a. Heinrich Müller-Breslau and August Hertwig . After graduating in 1926, Hertwig Lewenton recommended applying as a structural engineer to the Harkort factory in Duisburg- Hochfeld . The bridge construction company Gesellschaft Harkort was one of the leading German companies in the field of steel bridges and structural steelwork. There, Lewenton u. a. from 1926 to 1929 the extension of the Norderelbe bridge in Hamburg and implemented his idea to make the arches of the new bridge full-walled. He soon rose to the position of chief engineer, but in 1932 he switched to Cologne-based Humboldt-Deutzmotoren AG , which also dealt with the design, manufacture and assembly of steel structures. Lewenton then worked as a senior engineer at the Norddeutsche Maschinenfabrik GmbH (Nomag) in Hamborn , but lost his position in the wake of the Reichspogromnacht in November 1938 due to the Nazi race laws. In 1939 he founded the Lewenton engineering office in Duisburg for “design and statics of steel structures”, which today operates under the name LWS Ingenieurgesellschaft für Tragwerksplanung mbH.

Lewenton's first order was the overall planning of the machine hall for the Sack company in Düsseldorf-Rath , a hall with a steel tonnage of 1500 t including all heavy-duty cranes and the foundations. With the help of a few designers, his one-man office was able to produce all construction drawings ready for the workshop. Orders from a Viennese factory followed, so that he spent the last years of the war with his wife Johanna and son Michael in Vienna and returned to Duisburg in the summer of 1945. Lewenton's parents were able to emigrate in time.

After 1945 Lewenton's engineering office worked with great success in the planning and testing of supporting structures in steel bridges and building construction of prominent structures of post-war modernism in the Federal Republic of Germany. His design for the road bridge over the Rhine between Duisburg-Ruhrort and Homberg , developed in 1951 with the MAN Gustavsburg plant , envisaged a cable-stayed bridge , an innovative system that was also proposed by the rival civil engineers Franz Dischinger and Fritz Leonhardt . Duisburg decided on a conventional suspension bridge, which was inaugurated in 1954, but for which Lewenton took over the static-constructive test. In addition to Lewenton's work as a consultant for companies such as MAN Gustavsburg, Demag and Mannesmann , he developed a fruitful collaboration in building construction with architects such as Egon Eiermann , Sep Ruf , Harald Deilmann , Hans Schwippert and Manfred Lehmbruck . Ernst Werner , who was employed by Lewenton in his engineering office in 1950, played an important role in this ; he was appointed test engineer in 1962 and remained loyal to the office as a partner until his death in 1990. In 1970 Lothar Schwarz strengthened the management team of the engineering office and worked for the Duisburg-based LWS Ingenieurgesellschaft für Tragwerksplanung mbH until 2000.

In 1962 Lewenton was appointed to the newly created chair of "Structural Analysis for Architects" at the Faculty of Architecture at the Karlsruhe University of Applied Sciences at the suggestion of Eiermann . In 1965, Lewenton's main scientific assistant, Wolfgang Brennecke, introduced the term “structural engineering” for this area of ​​study , which was soon to establish itself in German-speaking countries. Lewenton's chair focused on the integration of structural conception and design, an objective that became a trademark of structural theory and was further developed in Karlsruhe by Lewenton's successor Fritz Wenzel from 1967 to 1998 at the Institute for Structural Engineering. At this institute Lewenton also represented the subject “Steel Construction for Architects”, from which he and Ernst Werner developed the two-volume pocket book “Introduction to Steel Structural Engineering”, which saw several editions.

Lewenton found his final resting place on November 25, 1988 in the forest cemetery in Duisburg.

Lewenton joined the SPD in 1945 and was involved from 1948, first as a civic member of the cultural committee of the city of Duisburg, and from 1959 to 1969 as a council member and committee chairman. He was also a member of the board of directors of the Deutsche Oper am Rhein - a theater community of the cities of Düsseldorf and Duisburg.

Under his aegis as chairman of the cultural committee, the Wilhelm- Lehmbruck-Museum of the city of Duisburg came into being, which opened its doors on June 5, 1964, when Lewenton turned 62. In his laudatory speech on Lewenton, the then mayor of the city of Duisburg, August Seeling , stated at the festive meeting of the council of the city of Duisburg on November 3rd: "He was a motor in all questions of the cultural and artistic life of our city". From June 20 to July 30, 1972, the exhibition of the Lewenton Collection took place in the Wilhelm-Lehmbruck-Museum. The exhibition included works by Max Beckmann , Marc Chagall , Emil Cimiotti , Salvador Dali , Werner Gilles , HAP Grieshaber , George Grosz , Erich Heckel , Fritz Grasshoff , Adolf de Haer , Ernst Ludwig Kirchner , Max Slevogt , Berto Lardera , Friedrich Werthmann , to name a few, see. The friend and collector of modern art Lewenton, however, drew a clear line which he did not cross: “If someone has to work with fat or slaughter lambs, that is his business. I fit "

Selection of structures in which Lewenton was significantly involved