Since October 26, 2003, Gussow has been a district in the municipality of Heidesee in Brandenburg , southeast of Berlin in the Dahme-Spreewald district . 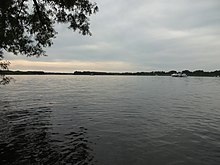 The place is on the Dahme west of the community center of Heidesee. In the north of the district is Senzig , a district of Königs Wusterhausen . It follows in a clockwise direction: Bindow , Blossin , Dolgenbrodt , Gräbendorf , Bestensee . The northern part is mostly forested. Agriculture is practiced in the middle , while the southern part is again covered with forest. The northern part of the Dolgensee , through which the Dahme flows, belong to Gussow . The Landgraben flows from the west to the Dahme through the area, the Heidekrautgraben in the southern part into the Dolgensee. The Friedrichsbauhof district is located in the southeast.

The term Gussow comes from the Slavic language area . In Sorbian gus stands for goose in Polish . The ditch flowing through Gussow was called Gusava or Gusova in the Middle Ages , which means something like Gänsebach. In later decades and centuries Gussow also appears as Gusow , Gußo or Guese . Gussow has been solidified by name since 1775.

The Gusaw was first mentioned in documents in 1436. It was described as a village on the "Trüben-See, on the border between the Beeskow rule and the Schenkenländchen ". In 1514 a Kruger lived in the village of zur Guso and he was obliged to the taverns of Landsberg . Apart from a few map entries, there is hardly any written record of von Gussow because, for example, there is no church chronicle of its own. From 1624 there are 12 farmers and four kötter and one shepherd. The area was 13 hooves , of which Schulzen was entitled to two hooves. In the Thirty Years' War and the village was devastated: Even at the end of the 17th century was every other homestead empty in late consequence of the war. In 1652 there was talk of a pointer; there were also four farmers with two sons. In 1684 the place had grown back to eight farms, but three were still desolate . There were five Kötterhöfe, three of which were desolate and a vineyard. The landlord was entitled to the shepherd's justice, the jug and brewing justice and the right to build and operate a small ferry across the river.

On a map by Ioh. Christian. Schreiber from Leipzig, dated between 1710 and 1730, Gussow is first mapped as Gusow. In 1711 it had grown to six gables (= residential houses). A blacksmith, a shepherd, a shepherd, the big and the little servant and three pairs of householders lived there. They paid four groschen for each of the 13 hooves. In 1743 Gussow had grown to twelve farm positions. In addition to a jug, there were two other family houses outside the village. Since Gussow was included in the Charte de la Moyenne Marché of the Homaennian heirs in Nuremberg in 1783, the place has been noted more frequently in cartography.

In 1801 there were twelve whole farmers in the village, two Büdner, two residents, a jug and the sheep farm. The statistics still recorded 17 fireplaces (= households). Gussow continued to grow and through further construction there were already 22 houses in 1840. Gussow appeared on a cadastral original map from 1850. In 1858 there were 21 farm owners who employed 37 servants and maidservants and twelve day laborers. There were three part-time farmers and 27 workers. There were 24 properties in Gussow. One was 644 acres , and two more totaled 647 acres. Eleven properties were between 30 and 300 acres (together 2231 acres), and seven other properties were between five and 30 acres (together 68 acres). Three other properties came together for just five acres. In the meantime, numerous trades had settled. There were three master tailors, a carpenter and shipbuilder with six journeymen and three apprentices, a carpenter with a journeyman, a bricklayer, a blacksmith with a journeyman, a trader, a shopkeeper and two shipowners with six ships and two electric vehicles. There was also a local innkeeper, a reindeer and a poor man. In 1860 there were two public buildings, 29 residential and 50 farm buildings, including a brick factory. In 1892 a village school chronicle was created. From this it can be concluded that from this year on the children no longer had to attend classes in neighboring Gräbendorf, so that a school was now available.

Around 1900 there were 450 people living in Gussow in 59 houses (1900). In the meantime there were two lodging houses and excursion restaurants and there is intensive local recreational tourism from neighboring Berlin. The Berliners took the steamer and excursion boats over the Spree and Dahme to Gussow, docked at Gussower Dorfstrasse, returned to one of the two inns and later drove back to the big city. Since the Weimar Republic there has been a former country home of the Berlin City Mission in Gussow with a “wonderful bathing beach”, which is now one of their guest houses for children, young people and senior citizens. In 1910 a privately operated cemetery opened in the Friedrichsbauhof district . By 1931 the number of buildings had grown to 75 houses.

After the Second World War , 270 hectares of land were expropriated and divided. Six farmers together received just two hectares, 14 farmers together 31 hectares and five farmers together 41 hectares. Five other farms received 56 hectares. The areas of 33 old farmers were increased by 96 hectares. In 1952 a type I LPG was founded , which was converted into a type III LPG in 1953. It had 78 members and cultivated 308 hectares of agricultural land. Another LPG type I had five members with an area of ​​47 hectares, which, however, joined the LPG type III in 1964. In 1971 the LPG merged with LPG Senzig to form LPG Gussow-Senzig, based in Gussow.

The mayor is Mario Thiede, other members of the local advisory board are Andre Gruve and Benjamin Rohde.

In the 21st century there is a children's farm in Gussow, an ice cream parlor with a lido, some dining options, boat rental, a soccer field, a beach volleyball facility and a daycare center. The artists Leni Löber-Schamal and the sculptor Joachim Schamal work in the village .

Via the district road 6152 there is a connection to the federal road 246 in the Dolgenhorst settlement , which leads south past Gussow in a west-east direction. To the north there is a connection to Landstrasse 40 via Bindower Strasse , which leads to Senzig and Friedersdorf. The RVS bus line 724 connects the town with Königs Wusterhausen and Streganz.

Districts of the community Heidesee