Blossin ( Lower Sorbian Błožin ) is a district of the municipality of Heidesee in the district of Dahme-Spreewald (State of Brandenburg ), southeast of Berlin . Blossin was first mentioned in a document in 1448 and was an independent municipality until 2003.

The place Blossin is located directly on the west bank of the Wolziger See on the road from Friedersdorf to Storkow . The district measures 12.87 km², the center is at an altitude of 35  m above sea level. NHN . Blossin currently (2012) has around 200 inhabitants. The small Küchensee is located directly to the west of the town center . In the southern part of the district, the Storkow waters connect the Wolziger See with the Langen See . The highest point is the White Mountain directly north of the town center at 53.6 m.

The place was first mentioned in 1448 as Blessin . At that time it was owned by the von Queiß . The name Blossin comes from the Old Sorbian language and means: settlement / village of a Bloš (a) or Blož (a). Bloš (a) / Blož (a) is the nickname of first names like Blogomil or Blahomil, to nso. bložki happy, blessed. In terms of the village structure, Blossin is a dead end village with an estate.

The size of the village or the number of hooves is given very differently in the course of history. In 1528 there was a sheep farm in Blossin. For 1576 only 4½ peasant hooves are mentioned (without the knight hooves), in 1600 there are 4½ peasant hooves and 6 knight hooves, 1727 12½ hooves (not differentiated) and 1801 12 farmer hooves and 6 knight hooves. In 1556 a vineyard belonged to the place. In 1576 the 4½ Bauernhufen were undeveloped, and four cottages (out of eight) were not occupied. Besides the four Kossäten two lived Häusler in place. Around 1600 all farm and farm positions were probably occupied again. For the first time a shepherd is mentioned (again). There are no reports from the period of the Thirty Years' War or the decades thereafter. In 1692 4½ farmer's hooves and 4 out of 8 kossatten sites were still desolate . Apparently part of the arable land was used as pasture; called a shepherd and a tenant shepherd. The village also had fishing rights in Lake Wolziger .

In 1727 12½ hooves are given, which apparently were in cultivation. 1745 was a Vorwerk emerged that managed all Bauerhufen. Only four Kossäts lived in the village, plus a lowland ranger ( Unterforester ). There was also a sheep farm in town. In 1775 there were 4 cottages and 18 Büdner and others living in the village, a total of 24 fireplaces. In 1801, 17 residents lived in the village in addition to the 4 cottages. There was also a mug by now. Together with the administrative headquarters, there were 26 fireplaces (households) in Blossin.

In 1810 the Vorwerk Blossin was sold to the Count von der Schulenburg-Vitzenburg for a long lease . This included a large, massive, well-preserved house, 462 acres of fields, 78 acres of meadows and 16 acres of gardens, a brewery, a distillery, fishing in the Küchensee , in the Blossinschen Fliess and especially in the Wolziger See, private herds and 1498 acres of forest . The office Blossin was converted into a pure rent office, i. H. it only collected the leases and taxes. In 1812 the sub-forestry in Blossin was also sold. The stop (= value) was given as 546 thalers. In 1826 the tenant of the Vorwerk apparently fell into arrears and went bankrupt. As part of the foreclosure auction (subhastation), the property fell back to the king. In 1827 the royal government in Potsdam “gave” the estate to Baroness Hermine de Lavière in hereditary lease, for an inheritance allowance totaling 12,148 thalers and an annual lease of 900 thalers. For the Vorwerk Blossin alone, the inheritance money was 7010 thalers and the annual rent was 1702 thalers. The estate included a decent stately home , 462 acres of 151 acres, 29 acres of 7 acres (meadows), 16 acres of 152 acres of gardens and 1,498 acres of 129 acres of forest. The estate had the right to distill and brew and several mugs were compulsorily required to buy beer and spirits. This also included fishing and the like. a. in Lake Wolziger, which had been leased separately from the previous leaseholder for 620 thalers. The new tenant had to pay for the inventory on the property. Hermine Baroness von Laviére bequeathed the Vorwerk to the chief forester Ernst Friedrich Wilhelm Duhmcke in 1829. 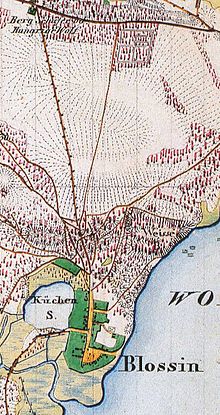 In 1837 the place with Vorwerk and Heideschäferei (later called Bergschäferei Hungriger Wolf; see Urmes table sheet) had grown to 31 residential buildings. The then tenant Selmar Seiffert was appointed arbitrator for the 4th rural district of the Beeskow-Storkow district in 1838. In 1845 the estate was again foreclosed. In 1848 the then landowner Hinrichs intended to set up a starch factory in the former distillery building. Berghaus names Hinrichs as an owner for the period before 1856. In 1856 the daughter of the domain tenant Michaelsen set up a sewing and knitting school for girls in the village. In 1858 a public building, 26 residential buildings and 48 farm buildings were counted in the municipality, the estate included three residential buildings and eight farm buildings, including a starch and syrup factory. The heather sheep farm (or now also called mountain sheep farm) was not included. In 1861 the town had 30 houses and 200 inhabitants, including seven Jews. There was a school, a sheep farm and a peat dig. In 1871 and 1879 the manor belonged to an Eduard Hermann Riemeyer. He owned the estate until at least 1885, at the latest by 1889, because in that year a Willmann, probably the following Oskar Willmann, is occupied as the manor owner in Blossin. In 1893 the estate belonged to Oskar Willmann, who was electoral man for the Beeskow-Storkow district that year. From 1896 (until 1929) Max Willmann was named as the manor owner in Blossin. In 1900 there were 38 houses (village and estate), and in 1931 39 houses.

In 1935, Baron von Lippert acquired the Blossin estate and set up a horse breeding facility and boarding school for girls.

During the GDR era, there was a company holiday camp of the VEB Zentralwerkstatt Regis , which the company maintained for the children of its employees.

In 1954 the Großberliner Wasser- und Drainagewerke became the owner of the castle. In 1955 the castle was converted into a holiday home. In 1960, an LPG type I with 15 members and 91 hectares of usable area was formed. In 1970 the LPG's in Bindow, Blossin and Dolgenbrodt merged. In 1971 this LPG was converted into a Type III LPG. In 1983 the manor house was listed and renovated from 1986 to 1989. In 1990 it was again owned by Berliner Wasserbetriebe, who used the building as a seminar hotel. In 1998 it was restored again. In 2007 the building and the site were acquired by teenex.eV and have since been used as a youth welfare facility.

The first local lords to appear in Blossin's first mention are the lords of Queis . In 1448 Friedrich von Bieberstein awarded the village of Blossin to Heinrich Gwiss's wife as a personal asset . A (younger) Heinrich von Queis led a private feud in 1528 against the Bishop of Lebus, his feudal lord, and was involved in the spectacular attack by Nickel von Minckwitz on the Bishop of Lebus in Fürstenwalde. Presumably as a result of the feud and the attack on Fürstenwalde, he lost the place or had to sell it. In 1555 Georg Lawaldt was owned by Blossin. His cousins ​​Erhard, Joachim and Christoph in Lublow were lent to the whole hand . At the 1583 draft, von Lawaldt and Georg von Schlieben zu Stansdorf had to provide a knight's horse. According to the verdict of the drafting commission, this has been quite rumored. In 1642 the local rule passed to that of Maltitz . On February 19, 1656, Hans Joachim von Maltitz auf Plössin and Catharina von Bredow, widow of the Brandenburg cavalry captain Joachim von Ketzlin auf Klessen , agreed on a marriage foundation in the amount of 8,000 thalers. According to Rudolf Biedermann, Blossin was briefly owned by the Landsberg taverns in 1681 . Joachim-Friedrich Schenk von Landsberg swapped Blossin for Sputendorf ( Waldeck ) with Otto Joachim von Langen this year . The exchange must soon have been reversed, because in 1684 Schenk Joachim-Friedrich leased the Vorwerk Sputendorf to a Meier. On the other hand, Elector Friedrich Wilhelm gave Otto Joachim von Langen his consent to pledge Blossin to the mayor Christian Friedrich Bartholdi (1644–1707) of Cölln for 3,500 thalers for a period of 20 years. In 1686 Christian Friedrich Bartholdi received the Blossin enfeoffment. In 1712 his heirs left the Blossin estate to their co-heir Friedrich Heinrich von Bartholdi , Baron von Micrander (1677–1730) for 10,000 thalers. On October 31, 1729, President Friedrich Heinrich von Bartholdi, Baron von Micrander sold the Blossin estate for 16,000 thalers to the Prussian King Friedrich Wilhelm I ("the soldier king "), who then formed the Blossin office from it . By 1813, the administration of the offices of the Wusterhausen lordship, and with it the Blossin office, had been transferred to the royal government in Potsdam. In 1829 the Blossin office was dissolved and assigned to the Königs Wusterhausen office. In 1843 the rule of Wusterhausen was released from the administration of the royal government in Potsdam and assigned to the court chamber of the royal family estates. In 1852, Blossin was administered by the Königs Wusterhausen Rent and Police Office. The rule of Königs Wusterhausen was dissolved in 1872. In 1849 the municipality and the manor district of Blossin were created. In 1858 the parish comprised 804 acres, the manor district with farm and mountain sheep farm 1770 acres. In 1928 the parish and manor district were combined to form the parish of Blossin.

The village of Blossin belonged to the original Lower Lusatian rule Storkow , the owners of the village were vassals of the respective owners of the Storkow rule and Storkow Castle . After the extinction of the von Strele family , which were found in Storkow Castle shortly after 1200, the rule of Storkow passed to the von Biberstein family in 1384 . In 1518 they had to pledge the rule to the Bishop of Lebus Dietrich von Bülow . In 1556 the rule of Storkow, together with the rule of Beeskow, came to the Electorate of Brandenburg. In 1576 the lordships of Beeskow and Storkow initially came to Brandenburg as a Bohemian fiefdom, and their affiliation to the Lower Lusatia margravate was finally dissolved in 1742 when the fiefdom was lifted. Today the area around Storkow is no longer counted as part of Niederlausitz in the common sense. From the two lordships of Beeskow and Storkow, the Beeskow-Storkowische Kreis was formed around 1800. In 1816 the Beeskow-Storkowische Kreis and the Teltowische Kreis were combined to form the Teltow-Storkow district, but were separated again in 1835. 1950 to 1952 the place was briefly assigned to the Fürstenwalde district. During the district reform of 1952, Blossin came to the Königs Wusterhausen district . In 1993, the Königs Wusterhausen district was merged with the Lübben districts and most of the Luckau district to form the Dahme-Spreewald district.

As part of the administrative reform after the political change in the former GDR, Blossin founded the Friedersdorf office in 1992 together with eleven other municipalities . On May 15, 2002, the Ministry of the Interior of Brandenburg approved the merger of the communities of Bindow , Blossin, Dannenreich , Friedersdorf , Kolberg and Prieros to form the new community of Heidesee. The merger only became legally effective on October 26, 2003. Other municipalities were incorporated into Heidesee by law on the same date. Since then, Blossin has been part of the Heidesee community.

Jetty in Blossin (on the west bank of the Wolziger See)

Today, Blossin is primarily a destination for water sports enthusiasts. Until 1990 the training center of the German University for Physical Culture Leipzig for water driving sports was located here . A training center of the State Secretariat for Physical Culture and Sport in the GDR was also located there. The site on Wolziger See is now used as a leisure and sports center with a marina. The Blossin youth education center is also located there (Waldweg 10) .

The list of monuments of the state of Brandenburg for the district of Dahme-Spreewald lists the following land and architectural monuments (city end of 2012).

The following natural monuments are present in the Blossin district:

Districts of the community Heidesee