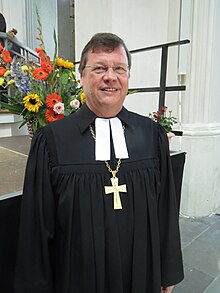 Hans-Juergen Abromeit (* 13. October 1954 in Gevelsberg ) is a German Protestant theologian and was bishop in the diocese Mecklenburg and Pomerania of the Evangelical Lutheran Church in Northern Germany . Before that he was the last bishop of the Pomeranian Evangelical Church , which was merged into the Northern Church in 2012 through a church merger, which was largely supported by Abromeit.

Abromeit studied Protestant theology in Wuppertal and Heidelberg . He completed his vicariate in Heidelberg and Jerusalem . Then he was pastor in his Westphalian hometown of Gevelsberg and academic assistant at the chair for practical theology and religious education in Münster . In 1991 he received his doctorate on Dietrich Bonhoeffer's Christology and in 1994 he became a lecturer at the pastoral college of the Evangelical Church of Westphalia . Later he also taught at the Institute for Further Education in Schwerte-Villigst , Haus Villigst .

In September 2001 he became bishop of the Pomeranian Evangelical Church. The constituent synod of the three fusion churches decided in January 2012 that Abromeit should receive the office of one of the two bishops in the district of Mecklenburg and Pomerania. He left this role in September 2019. In addition to this post he was director of Bugenhagen Foundation and Chairman of the Board of Trustees of Greifswald Bach Week , still he is chairman of the Jerusalem Association , vice chairman of the Foundation for the Bethlehem Academy "Dar al-Kalima" (House of the word) and the German Bible Society . Abromeit is also part of the jury for the Karl Barth Prize and a member of the board of trustees of the evangelical association ProChrist . He belongs to the board of the association for the promotion of research into evangelism and community development. V. , whose purpose is to support the institute for research into evangelism and community development at the University of Greifswald. After the regular resignation from his office as bishop, he took over the management of the research project “Church Shrinking and Growing in the Context of Peripheral Rural Areas of Western Pomerania”.

In September 2018, Abromeit delivered the sermon at the closing service at the March for Life , a demonstration of the rights movement .

Hans-Jürgen Abromeit is married and has five children.

Abromeits lecture on August 1, 2019 at the 124th annual conference of the Evangelical German Evangelical Alliance in Bad Blankenburg with the title “Two peoples - one country. A biblical vision for peace between Israel and Palestine, ” sparked heated public controversy. According to the evangelical evangelical news agency idea , Abromeit

“Called to not only perceive the Israeli point of view in the Israel-Palestine conflict [...] According to Abromeit, the Germans' sense of guilt as a result of the Holocaust resulted in an over-identification with the State of Israel. There is deliberately no distinction between biblical Israel and today's state. But this leads to a mixture of the theological and the political level. Furthermore, advocating the security of the State of Israel is declared a raison d'etat by German representatives, said Abromeit. Since the Israeli state sees itself as a Jewish state, the disadvantage of the Palestinians follows in principle. "

The politician Volker Beck , the former chairman of the German-Israeli parliamentary group of the German Bundestag, was one of the first to describe himself as “stunned” and attested Abromeit “theologically weird stuff”. The BILD newspaper took up the case, spoke in its headline of an "anti-Israel speech" and also rated it with the adjectives "terrifying" and "bizarre". The Jüdische Allgemeine entered into the debate on August 5th under the title “A bishop against Israel”, certifying Abromeit “irritating statements about the legitimacy of the Jewish state”, but deliberately did not raise any allegations of anti-Semitism . Nevertheless, the anti-Semitism accusation was in the room, which is why the regional bishop of the North Church, Kristina Kühnbaum-Schmidt , immediately declared that she resolutely contradicted any form of anti-Semitism. Abromeit himself admitted, referring to terms of the '68 movement against the NDR of " Springer press " to blame for the public attention. He described himself as a “friend of Israel” who just wanted to include the Palestinians as well. He never questioned Israel's right to exist. However, he expressly regrets the word "over-identification" uttered by him.