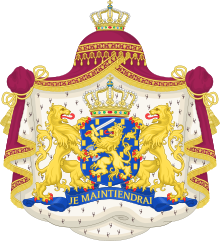 Coat of arms of the King of the Netherlands

Family coat of arms of the Counts of Nassau

Coat of arms of the House of Orange-Nassau with the quarters 1: Fulda , 2: Corvey ; 3: Dortmund 4: Weingarten , heart: Orange with the Nassau lion

Family tree of the House of Orange-Nassau

The House of Orange-Nassau ( Dutch Huis Oranje-Nassau ) is the ruling royal house of the Netherlands . His political supporters used to be called orangists .

Originally the name Orange comes from the Provencal county of Orange ( French Orange ), the later Principality of Orange in the Rhone plain in what is now France.

Establishment of the House of Orange

The forecast for the city was orange in the southern French Département Vaucluse around the year 800 by a vassal Emperor Charlemagne named William ( Guilhem d'Orange ingested). Although he was the first Count of Orange, he was not a relative of the current Princes of Orange. This William of Orange is also associated with William of Toulouse (alias William of Aquitaine) and Saint-Guilhem (see Saint-Guilhem-le-Désert ).

In 1163 the county was raised to the status of imperial principality by Emperor Friedrich I Barbarossa . The principality, barely 300 square kilometers in size, came to the Chalon family at the beginning of the 15th century through the families of Montpellier and Les Baux . The French King Francis I annexed the principality, and the last of the Chalon family, Philibert of Chalon , was imprisoned from 1524 to 1526. Philibert then took part in the Sacco di Roma as general of Emperor Charles V , later defended Naples against the French and got his principality back in 1529 as a reward. He died childless in 1530 at the age of 28.

Philibert's sister Claudia von Chalon was with Heinrich III. von Nassau married (the Nassau already owned large parts of the Netherlands). The son of Claudias and Heinrich, Renatus , inherited the principality. Before Renatus died - without legal descendants - he named his cousin Wilhelm von Nassau-Dillenburg as heir, who was therefore allowed to call himself Prince of Orange. However, the condition of Emperor Charles V was that Wilhelm was brought up Catholic at his court in Brussels . Charles's son Philip II of Spain made him governor of the Seventeen Provinces . When the Calvinist Seven Provinces in the north rebelled against the blood regime of the Duke of Alba and the Inquisition in 1568 under the leadership of the Geuzen , Wilhelm took the lead. In 1581 the seven provinces declared their formal independence from Spain as the Republic of the Seven United Netherlands , with William of Orange as governor and the States General as parliament. The Eighty Years' War with Spain began . In 1584 a Catholic fanatic murdered Wilhelm in Delft . His son Moritz followed him as army leader and governor. The construction of a hereditary governorship, instead of a monarchy, led to a generation-long rivalry between the oligarchically ruling patricians of the wealthy trading cities, especially the rulers of Amsterdam , and the popular governor dynasty - during the entire Golden Age and even the 18th century. Century. The War of Independence with Spain was only ended in 1648 with the Peace of Westphalia , which brought international recognition to the Republic of the United Netherlands and, at the same time, its departure from the Holy Roman Empire .

Wilhelm's great-grandson, the governor Wilhelm III. von Orange , lived in the Huis ten Bosch in The Hague and had Het Loo Castle built as a summer residence. Together with his wife Maria II from the House of Stuart, he ascended the English throne in 1688. He saw his main task in curbing the hegemonic claims of the French "sun king" Louis XIV , which involved the Netherlands in decades of war. When he died childless in 1702, the line of Wilhelm I expired and the governorship of the Netherlands was suspended.

Succession of the House of Nassau-Diez

The king had appointed his cousin Johann Wilhelm Friso von Nassau-Diez († 1711) as the sole heir, who was descended from a brother of Wilhelm I and had been captain general of Friesland from 1707 and governor of Groningen from 1708. However, the King of Prussia , Friedrich I , also claimed the title of a closer male relative of Wilhelm I of Orange, because both Friedrich's mother, Luise Henriette of Orange , and Friedrich's paternal grandmother, Elisabeth Charlotte von der Pfalz , were granddaughters Wilhelm I. been. The Peace of Utrecht in 1713 brought the principality of Orange to France and the upper quarters of the Duchy of Geldern to Prussia, and most of the Orange's private fortunes fell to the Prussian king. In 1732, Friedrich Wilhelm I , the soldier king, returned the castles Huis ten Bosch and Het Loo to Friso's son Wilhelm IV of Orange . In 1734 he also inherited the Principality of Nassau-Siegen and united it with his Principality (Orange) Nassau-Diez. From 1747 to 1751 he was then inheritance holder of the Republic of the Seven United Provinces. He thus reunited all imperial German and Dutch possessions of the house and was the first to bear the title of Prince of Orange and Nassau .

In 1813 and finally in the Congress of Vienna in 1815, the principalities of the Orange line, Nassau-Diez , Nassau-Hadamar and Nassau-Dillenburg , came to the Nassau-Weilburg line , whereby for the first time since 1255 all German Nassau countries were reunited in one hand, with exception of Nassau-Siegen , the Wilhelm VI. ceded to Prussia, for which he received the Grand Duchy of Luxembourg in return . But he was now called Wilhelm I King of the United Kingdom of the Netherlands and thus founded today's Dutch royal house . However, the Belgian Revolution of 1830 led to the secession of Belgium as an independent kingdom under the government of the House of Saxe-Coburg-Gotha .

In 1890 Luxembourg also split off: When King Wilhelm III. who had previously intended to sell Luxembourg to France, died and the Dutch throne fell to his daughter Wilhelmina , the closest male relatives, the Dukes of Nassau, arrived on the basis of the private law inheritance contract between the princes of the House of Nassau (the Nassau Hereditary Association). Weilburg , to the government in Luxembourg. However , they had already lost their Duchy of Nassau to Prussia in the German War in 1866. This last line of the House of Nassau also expired in 1912 with William IV of Luxembourg , whereupon the female succession came there as well.

The title of Prince of Orange

In 1713 the territory of the principality finally came to France. Title and coat of arms, however, fell to the Prussian King Frederick I of France King Louis XIV. , However, awarded the title of prince ( Prince ) to the Marquis de Mailly-Nesle, a French nobleman. He justified his approach with the alleged lack of a legal heir and that he could therefore freely dispose of land and title. However, in the Peace of Utrecht in 1713, the princes of Nassau-Diez also acquired the right to titles and coats of arms and thus acquired today's Dutch royal house.

As a result, three people still bear the title of Prince (essin) of Orange today : 1. the heir to the throne of the House of Orange-Nassau (Crown Princess Amalia ), 2. the head of the House of Hohenzollern ( Georg Friedrich Ferdinand ) and 3. the French Marquis Mailly-Nesle.