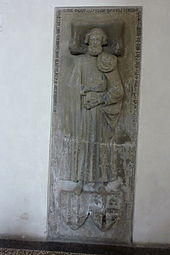 Gravestone in the Liebfrauenmünster Donauwörth 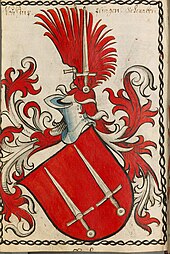 Heinrich von Zipplingen (also: von Syplingen) († June 9, 1346 ) was an important member of the Teutonic Order and advisor and secretary to Emperor Ludwig the Bavarian .

The Swabian family from which the nobleman came named after Zipplingen , a Teutonic Order parish village northwest of Nördlingen since 1285. He was frater of the order in Würzburg around 1309 , then Komtur zu Oettingen 1313-1326, around 1324 in Ellingen ( his successor there was Herbrand von Schmähingen), around 1329 in Donauwörth (1329 to 1346) and (probably at the same time) 1334–1346 in Ulm . The Commandery building in Ulm was rebuilt under him, as was the Gothic Elisabethenkirche named after a patroness of the order (demolished in 1818).

In Donauwörth, King Friedrich II handed over a chapel built on the bridgehead of the old Danube bridge to the hospital brothers of the Teutonic Order in 1214. When Heinrich von Zipplingen came to Donauwörth as Commander, he enlarged the order's offices there and the chapel. For those coming in Donauwörth he became the greatest benefactor as the founder of 15 bed places in the hospital and donor of other benefits for the sick and the brothers, so that the foundation of the house and the hospital there was attributed to him.

At the height of his career in the Teutonic Order, he worked 1329–1334 as Landkomtur der Kommende Oettingen der Ballei Franken (his successor there was Heinrich Fuchs von Zipplingen). As Landkomtur he was advisor and secretary to Emperor Ludwig the Bavarian, who was very fond of the Teutonic Order. In 1334 and 1340, Emperor Ludwig the Bavarian referred to him as his "dear secret", ie his secret advice. In 1335 and 1336 he was the emperor's envoy to Pope Benedict XII. to Avignon, in 1339 to King Edward of England .

In detail, Heinrich is known that with a document dated March 12, 1323 he bequeathed the use of a property in Mantlach (today part of the municipality of Titting in the Eichstätt district ), which Heinrich and Gertraud Prager had bought together with their brother Eberlein, to the Ellingen Hospital as soon as both of Prague's citizens would have died. The usual benefices of the hospital inmates were then to be supplemented with wine, nice bread and fish.

On December 18, 1332, Emperor Ludwig the Bavarian gave the Teutonic Order the privilege of turning the Franconian village of Eschenbach ( Wolframs-Eschenbach ) into a town with the German Order Coming Eschenbach "at the request of our advisor, Brother Heinrich von Zipplingen, Landkomtur in Franken " .

Heinrich von Zipplingen probably died in Donauwörth because he was buried there.

The coming Ellingen and Oettingen in: State Archives Ludwigsburg