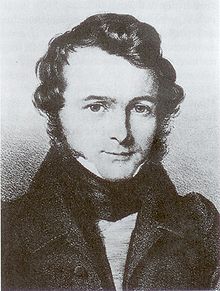 Von Meyer was the son of Johann Friedrich von Meyer (1772–1849), a lawyer, politician and Protestant theologian who became famous with his translation of the Bible in 1819 ("Bibel-Meyer"). After attending grammar school in Frankfurt , Hermann von Meyer studied natural sciences in Heidelberg , Munich and Berlin . In 1825 he became a member of the Senckenberg Natural Research Society and devoted himself to palaeontology . He searched and studied fossils and developed paleontology as a separate biological discipline. Among other things, he described and named Plateosaurus , a genus prosauropod dinosaur and, after the discovery of a fossil feather in the lithograph slate of Solnhofen, in 1861 the genus Archeopteryx , the oldest known bird to this day.

He wrote over 300 scientific descriptions, which are characterized by great care and accuracy and were supplemented by high-quality illustrations he created. From 1846 he gave Palaeontographica with Wilhelm Dunker in Kassel . Contributions to the natural history of the prehistoric world .

In addition to his scientific work, he held numerous public offices. He worked at the German Bundestag in Frankfurt am Main from 1837 as “Federal Treasury Control” and from 1863 as “Federal Treasurer”. In the German War of 1866 he withdrew the Federal Treasury from the Prussian army and took it to Ulm and later to Augsburg . After the end of the war, he was tasked with liquidating the fund and then retired with the other federal officials.

Hermann von Meyer was a member of the Society of German Natural Scientists and Doctors . In 1829 he was elected a member of the Leopoldina . In 1845 he received an honorary doctorate from the philosophy faculty of the University of Würzburg . In 1858 he was awarded the Wollaston Medal by the Geological Society of London . In 1860 he was elected a corresponding member of the Göttingen Academy of Sciences . Since 1863 a mountain in New Zealand has been named Mount Meyer in his honor .